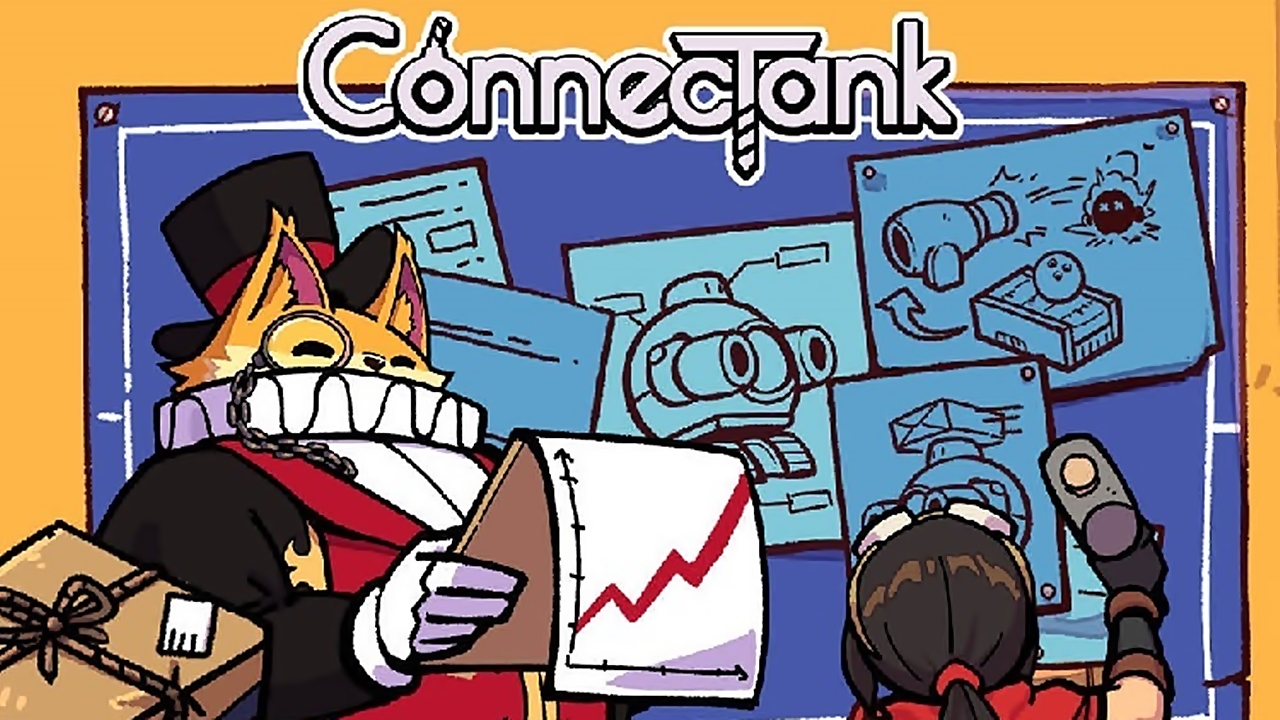 Last week, I had the privilege to attend a private press event hosted by Natsume Inc. It was for a game called ConnecTank, which is being developed by Yummy Yummy Tummy. It is a 2D Action-Adventure game that has players work for large companies as delivery drivers in the world of New Pangea. However, instead of a lorry or a van, players get to drive their very own tank. New Pangea is quite a dangerous place after all with many other tank drivers wishing to take you out and cripple your employer’s monopoly.

ConnecTank is full of colorful characters from your fearless conglomerate leaders to the capitalist traders that you will meet on your journey across the new world. Your first employer is the Baron Finneas Fat Cat XV, a literal fat cat from a long line of Fat Cats. You will also be able to work for other employers that include the debonair art lover and collector Lord Lewis Longneck of Lewingford and the Baron of the Tundra Collective, Emperor Pontius Penguin.

The gameplay of ConnecTank is affectionately referred to as “Co-operative Chaos”. Up to four players can play together locally and must work as a team to supply the tank’s cannons with ammo. This is so your tank can bombard and destroy the enemy tank before they can destroy yours. On the map screen, one player can move the tank around and choose which direction it would like to take in order to reach its destination. If you come in the vicinity of another tank, combat ensues.

When in combat, players must co-ordinate themselves to establish a productive conveyor belt to carry ammunition parts to the cannons. As they do so, they will be bombarded by the enemy’s tank and enemies will make their way inside the tank and you will have to fight them mano a mano. With that going on, some parts of the conveyor belt can become damaged and will need to be repaired and replaced. These things alone will have places racing around the screen repairing, reloading, and fighting, hence “Co-operative Chaos”. Think Overcooked but with TANKS!

On top of that, you need to combine your ammunition parts to create a certain kind of ammo. Different types of ammo can be strong or weak against particular enemy tanks so you have to make sure you know what kind of ammo is effective against the enemy and what ammo parts are needed.

As I touched on briefly before. Multiplayer is restricted to local co-op only or “Couch Co-op”. This means that the only way to play this with your friends is if they actually come round to your house or you to theirs. It is understandable why the devs want to keep it local co-op as it is one of those games that feels so much better to play alongside friends rather than through a headset with a microphone.

Of course, with any action-adventure game these days, you can upgrade your gear to make it stronger. You can upgrade your ammunition to make it do more damage and you can also acquire MODS that can help give you an advantage in battle. Though you start off with the one tank, as you destroy enemy tanks you will collect parts from it. If you collect enough of them, you will be able to create that tank and add it to your collection and use it on missions. There are 70 different tanks in ConnecTank so collecting them all will surely keep you busy. Not to mention that enemy tanks on the map are procedurally generated so it could take a while to collect all the parts just for one tank.

I am very much looking forward to ConnecTank when it releases on Nintendo Switch, PS4, XBox One, and PC sometime in Q3 2021. It looks to be a lot of fun and I’m sure I can muster up a few friends to play the local co-op mode.

We would like to take this moment to thank Mika, Erica, and Graham for inviting us to the ConnecTank event.