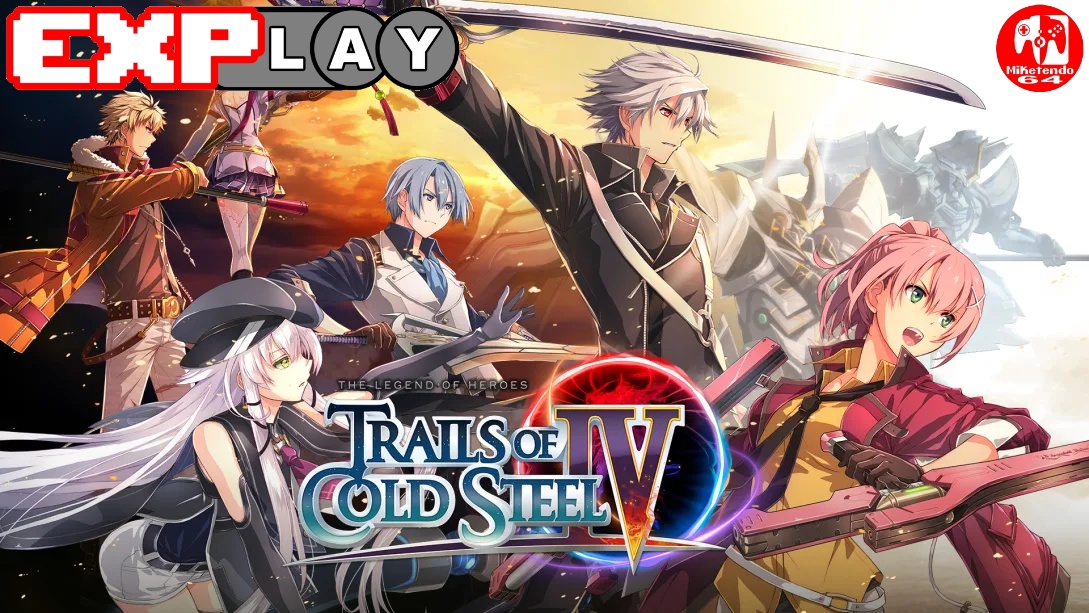 Welcome to EXPlay, (Explain & Play) the review series where we care not for scores but tell it how it is when it comes to every game we get our hands on, whilst also taking the time to include some lengthy gameplay, to give you the reader, the chance to shape your own impressions and views whilst watching and reading. In this instalment, we’re covering The Legend of Heroes: Trails of Cold Steel IV by Nihon Falcom.

The Legend of Heroes: Trails of Cold Steel IV: (The Explanation)

All things come to an end and for Trails, Trails of Cold Steel IV marks the end of Erebonia arc. Nihon Falcom had previously hoped they would be able to bring the story to a satisfying conclusion with three instalments, but soon discovered a trilogy would not be enough and so, a tetralogy would have to come to pass, giving the heroes of Class VII, both former and present, one final adventure to endure.

Being so closely released to the third instalment of the series, from the outset, something most players will notice is just how similar The Legend of Heroes: Trails of Cold Steel IV is. From the game’s visuals to its quality of voice acting, general gameplay, the turn-based battle system, game menus and game text, unlike Cold Steel III, Cold Steel IV was developed with the same PhyreEngine game engine.

Still, just because the game was developed using a free-to-use engine that comes straight from Sony Interactive Entertainment, it is worth mentioning that the Switch release was ported by Engine Software, who in recent years have helped out on a number of NIS America titles, including the upcoming Switch and Microsoft Windows ports for Ys IX: Monstrum Nox.

On a story perspective, Trails of Cold Steel IV kicks things off, two weeks later of the events of Trails of Cold Steel III. Rean Schwarzer is still a keen part of the adventure, but due to how things ended for him in the previous title, don’t go expecting him to be leading the charge from the outset. Instead, players can expect to spend more time with Juna and Kurt, just be warned, in typical Trails fashion, there is still plenty of text and cutscenes to sit through.

As an example, during my first two hours of the game, it only felt like I had played been playing for 40 minutes, thankfully more gameplay opens up as players progress, especially in the form of sidequests and battles, but always be prepared for some lengthy play sessions just to get the results you desire with every sitdown session of gaming.

Now, while Trails of Cold Steel IV does opt for repeating a lot of gameplay and battle features that were executed well in the previous title, minor improvements have been added, such as the game’s main characters having new S-Craft techniques and can once again utilise Lost Art, previously seen in Trails of Cold Steel II. There’s also more minigames to be enjoyed, modifications made to the Break and Order systems, with some characters even having purposefully weaker orders than can be upgraded.

In true RPG fashion, when you add up its levelling up system, side quests and mini-games, this is a game that players can easily invest over 100 hours into and for the true diehard fans of the series, having save data for the previous games, can result in you earning rewards. Granted, at this time, only Trails of Cold Steel III and IV are playable on the Nintendo Switch as of this moment, as ports for I and II are only confirmed for this year in Japan.

One large drawback, over than extensive dialogue and text, is if you haven’t played a Trails of Cold Steel game yet, you’re really leaving it to the last minute and if you opt to make Trails of Cold Steel IV the first game you play, there is plenty that will go straight over your head. Fortunately, for those willing to check them out, there is plenty of additional information available from the game’s main menu that can help bring you to speed on its settings, characters and events leading up to the current action.

With so much going on, Trails of Cold Steel IV is a game that can easily overwhelm a player if given a chance. There are plenty of details that can easily be missed. Mastering the battle system can feel like a tedious chore at times, so it’s a good thing auto-battle is supported function, but not always reliable. It is certainly a game worth taking the time to get to know it, but you would be better off by building on your understanding by playing the games that came before it first, than just taking a deep dive straight into Trails of Cold Steel IV. It is the best way to experience and enjoy the Erebonia arc.

The Legend of Heroes: Trails of Cold Steel IV: (The Gameplay)