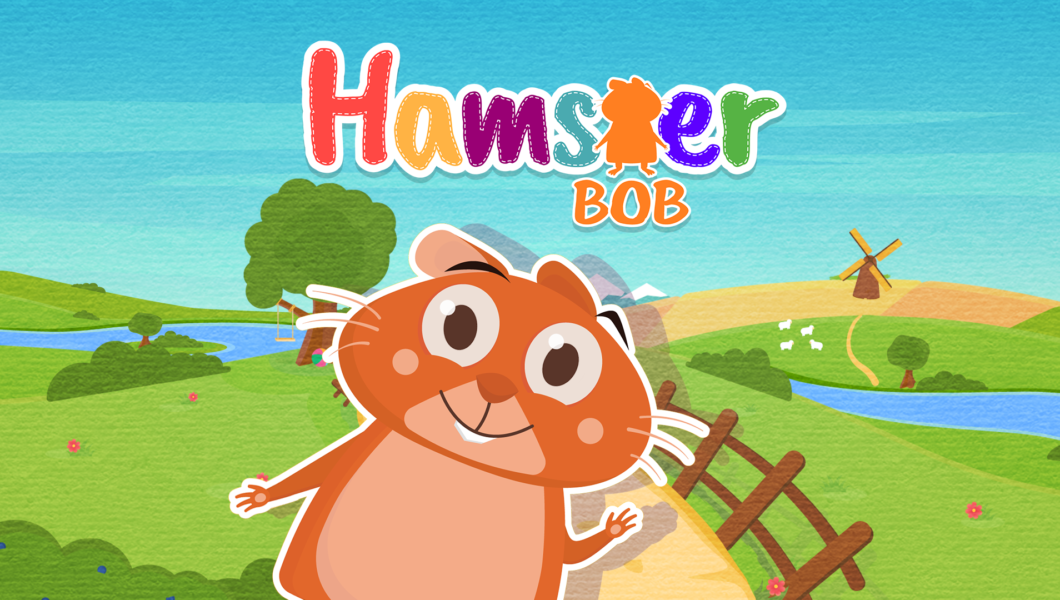 Hamster Bob was developed by Wild Berry Games, an indie developer team with the goal of creating well-designed games that can stimulate children’s imagination and creativity. Their one and only title first released on Google Play and the App Store in 2019 and was brought onto the Nintendo Switch mid-2020 with the help of publisher SONKA (which are veterans when it comes to bringing titles onto the console).

Hamster Bob doesn’t have an overarching story. Instead, it focuses on various smaller narratives, told by the titular protagonist, that push the current objective forward. Make a salad, go on a vacation, make new animal friends, just to name a few. The stories are simple yet engaging enough to captivate kids’ attention.

Hamster Bob is a coloring game. Through five thematic sketchbooks, composed of six unique sheets (which serve as a “level”), you color different characters, objects, and animals. The first sketchbook “Friends”, has you coloring a house, a duck, a sign, apples, and a cat, just to name a few.

The gameplay is quite simple. Each sheet starts out with the titular character, Hamster Bob, laying out the primary objective for said level. He guides you step by step on what and where to paint. As an example, let’s imagine you’re tasked with coloring a white tree. The primary areas for coloring are outlined and with the array of tools at your disposal, you’ll go area by area filling in the spots. First the tree trunk, then the leaves, and finally the apples. Once finished, Hamster Bob will congratulate you and move on with the narrative. It’s all very simple and well-thought-out for the little ones.

At your disposal are eighteen different colors, plus three different brush types and brush sizes. And finally, a reset button to clear out your mistakes. At the bottom, there’s a bar that fills up the more you complete the object at hand. Depending on how much you colored, you’ll be rewarded with different stars (which serve as a ranking system for those who want to complete everything).

You’ll occasionally be tasked with some smaller objectives other than coloring. Like guiding a duck to the other side of a pond, or cutting some vegetables, or counting how many red apples are on a tree. The difficulty is rather easy and should be great for kids age two to five. Some additional features are interactive backgrounds where certain places react when touched, like opening a cabinet for example.

There are two ways of playing, either docked or handheld. Though I personally prefer the latter, as coloring with your finger is a lot faster, you could use a controller when connected to a TV. Instead of using the analog stick to move around the screen, you use the controller’s gyro controls, which was a rather confusing button scheme at first. Though soon after I realized having motion controls were a lot smarter for accessibility and accuracy when painting.

As previously mentioned, the main mode is the Sketchbooks (five in total), with thirty sheets to complete (each with roughly four to five different objects to color). There’s also Stickers, a mode where you can revisit previous colored objects and re-color them. However, they’re locked until you interact with them in the Sketchbook.

Also, when tapping on Hamster Bob in the main menu, you’ll be sent into the customization area. Here you can dress Hamster Bob with different Clothes Packages, like builder, pirate, or mechanic attire. You can also feed the Hamster with Meal Packages.

The soundtrack is alright, for a coloring book game targetted for a very young audience, you’re getting some basic tunes that loop around after its beats are played. It has this “child-friendly” ambiance, so kids won’t be bothered hearing the track on repeat many times.

Hamster Bob is fully voice acted, which was quite surprising to see. It’ll be great for the smaller ones to hear a voice instructing them on what to do, rather than have them read everything.

Visuals are nicely done. There’s this fabric-like texture on everything, reminiscent of Kirby’s Epic Yarn overall design and feel. Designs are simple and easy to understand, and the dotted tracing on the colored objects gives them a fabric patch esthetic.

The performance is overall very solid. No frame rate drops or resolution drops for the most part, aside from the only occasion where the game froze for a second or two when cutting vegetables. Though it was noticeable, it never really affected my overall experience.

Hamster Bob is not a big game at all. To be honest, children will probably take around an hour to three hours to fully color all the objects available. This does of course, widely depend on the age of the child who is playing this game.

I would have preferred a larger color palette. While the eighteen available colors do the job in Hamster Bob, I would have liked to a bit more variety with some tonalities, like a darker red or different shades of grey.

Hamster Bob is a great coloring game for the young ones. If you’re looking for a simple yet enjoyable title focused on kids ages two to six, I recommend giving this game a try.