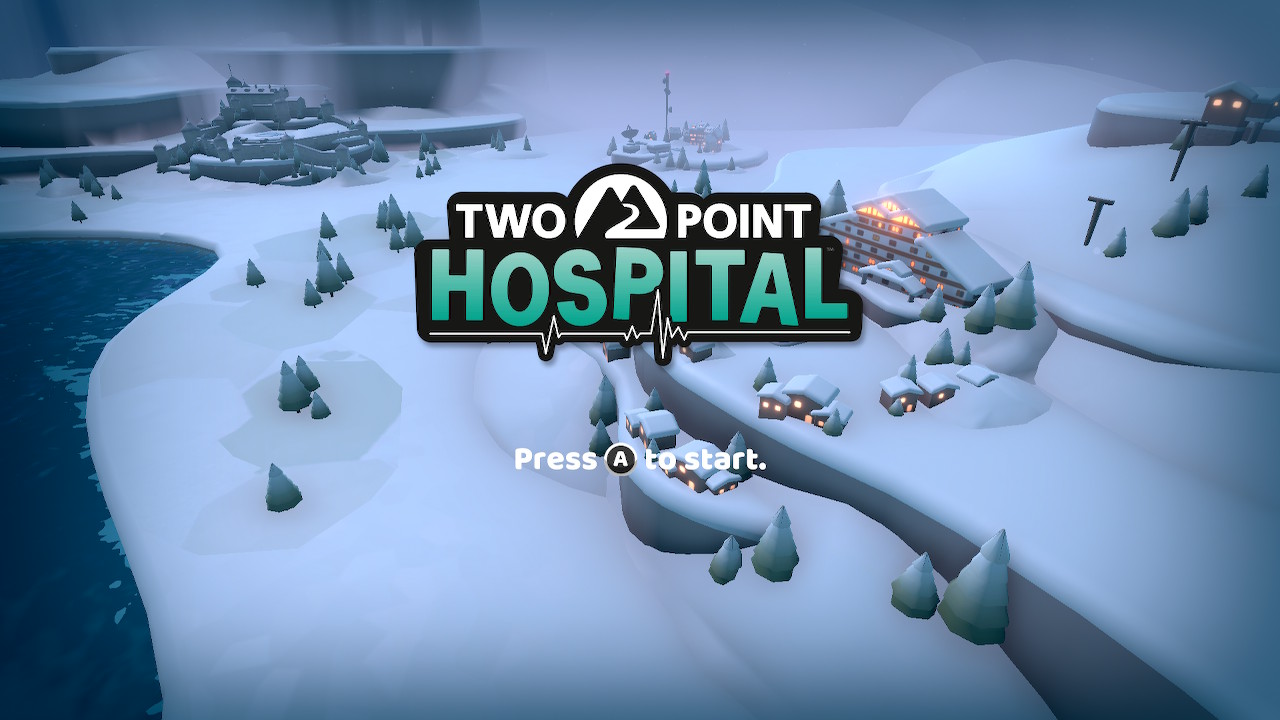 The year was 1997 and video game development studio Bullfrog Productions had developed the Hospital Management simulation game Theme Hospital. It was published by Electronic Arts and was released on PC first and a Sony Playstation (PSX) version followed in 1998. The game gave the player the opportunity to run their own privately owned hospital and cure fictional illnesses. It received generally positive reviews for its impressively detailed graphics (at the time), its humor, and addictive gameplay.

Two Point Hospital is a spiritual successor of sorts with some of the creators from the original development team for Theme Hospital. It released on Windows, Linux, and macOS in 2018 and was also praised by critics. The Console versions of the game have since seen release in February 2020, including the Nintendo Switch version. The console version also includes both expansions that were later added to the PC version of the game.

There is no story but the general premise of the game is that the player is in charge of constructing and operating a number of hospitals in the fictional region of Two Point County. With the help of an administrator, players are tasked with creating all sorts of rooms inside the hospital from GP offices to Wards, X-Ray Machines and anything and everything in between.

The goal is to treat and potentially cure the fictional and amusing illnesses that have stricken the patients. Over time, the player will have to research new treatments, deal with epidemics and keep staff happy, all whilst balancing hospital funds so they can obtain the three-star status Hospital they desire.

Being a business management Sim, Two Point Hospital tasks the player with an administrative role in managing funds and resources. Building and maintaining rooms and equipment costs money, as does the staff you contract to work in your hospital. The first priority is to set up shop almost immediately with capable staff and start treating patients as soon as possible. Treating and curing patients brings in income that can be used to maintain and improve the hospital.

There are 4 types of employees that players can hire; Doctors, Nurses, Assistants, and Janitors. They each have their own level of skill and can be promoted and trained in certain fields. Doctors can work in GP offices, Psychiatry, and specialist treatment rooms. Nurses can work on the Wards, General Diagnosis, Cardiology, and various clinics. Assistants handle the reception desks, kiosks, and newsagents. Janitors are perhaps the most tasked of all as they must keep the hospital clean, repair equipment, stock up vending machines, unblock toilets and, oh yeah… capture ghosts!

As you progress through the expansion of your hospital, you will eventually run out of space for all of your treatment rooms and clinics. You may be required to purchase plots of land in order to expand the size of your hospital to meet up with the ever-growing demand of patients. Of course, more clinics and treatment rooms mean more staff need to be hired to tend to patients and treat them. The patients’ well being is paramount to running a successful hospital. Failing to meet their needs, will cause them to storm out of the hospital or even die. This will harm your hospital’s reputation and will hinder your profits as fewer people will come to your hospital.

To help make your employees more efficient to maximize treatment success, you can train your staff and promote them. Doing so will require a training room and sometimes an external trainer to teach them new skills. The happiness and energy levels of your staff are also important so that they don’t decide to quit on you when you least expect it. You can manage when your staff takes breaks and when to raise their salary. Just bear in mind that doing so will eat into your profits and other staff members will feel the strain as they cover their colleague’s absence.

There are 18 hospitals scattered over 5 different regions for players to manage. Each one of them introduces a new illness to treat and treatment rooms to build as well as environmental hazards to take into account like earthquakes or freezing cold. The first few hospitals help you get to grips with the basics and gradually picks up the difficulty as you go. The later levels, however, can have an extremely high difficulty arc that if you are not careful, you will be up to your eyeballs in debt and having to rob Peter to pay Paul.

Every hospital has the possibility of reaching 3-star status. In order to achieve a Star, you will have to meet certain requirements like curing 60% of patients, reach a hospital value of $1,000,000, cure X amount of patients, etc. The Star rating works like many mobile games in that the better you do, the higher the rating you can achieve. As well as the key requirements, you will also receive requests to cure a certain number of patients suffering from a particular illness, create a Level 4 staff room or go so many days without death. These are optional tasks that can grant Reputation points, improve happiness levels and earn some Kudosh (more on that later).

As well as creating rooms, you can decorate and customize them as well. From posters of anatomy and gold certificates to bookcases and displays. This helps improve the attractiveness of each room that will help to keep patients and staff happy. Vending machines, arcade machines, and newsagents can help stave off boredom which is another big factor in the patient’s wellbeing. If they are going to be in your hospital for a long time, you may as well provide some entertainment for them.

There are two types of currency in the game, Dollars, and Kudosh. Dollars are used to purchase rooms, items, and machinery, as well as hire staff. Kudosh is a special currency earned by completing challenges and is used for unlocking more elaborate items for your hospitals like snazzy vending machines, elaborate rugs or more comfortable sofas. Speaking of challenges, these are not important in order to play the game but are helpful for getting Kudosh so that you can make your rooms much more elaborate and raise their prestige. The higher the prestige is in a room, the happier people will be in those rooms.

At the end of each game year, there is an award ceremony that gives awards depending on your successes over the year. Such awards include No Deaths, Best Research Hospital, Rising Star and Hospital of the year. These can give rewards like cash bonuses and Reputation points (every little helps, of course), so it is worth keeping this in mind and train your staff and research as much as possible.

Keeping on top of finances can be tricky, at times, you may need to hire and fire staff accordingly or even take out a loan to help afford expansions or builds. It is a dangerous road to go down as you will have to pay off the loan along with the interest rate over the coming months. However, if you come up with a huge influx of cash, you can repay the whole debt off and breathe a little easier, until the next time you fall short. If your funds fall below $150,000 you will be informed that should they reach -$300,000, your hospital will be forced to close. Oh, yeah. Two Point Hospital is not messing around.

Two Point Hospital features voice acting in two ways. One is a voice over a tannoy that informs you of what is going on around the hospital like a when a member of staff is needed somewhere, a patient has died, a fire has broken out, etc. The background music is done like a radio station. Several different tracks will play and during intervals, a DJ or Radio chat show host will provide a few words of interest.

As regards to the people that mill about your hospital, they make low incoherent sounds at times rather than actual speech, much like those in the Sims games. It’s just as well really as when your hospital gets busier and busier, you wouldn’t be able to concentrate on everyone’s voices if they were overlapping each other.

The visuals in Two Point Hospital are as colorful as they are amusing. The staff and patients in the game have a claymation look to them, much like animated films of Wallace and Gromit and Shawn The Sheep. Pretty much everything in the game has some comical look to them. This is most noticeable in the treatment rooms like the De-Lux Clinic and the De-Lux-O-Luxe machine that twists off the bulbs of patients suffering from light-headedness and screws on a new head.

A lot of attention has gone into all the little details, like the pencils in the pencil case on the GP’s desk or the flies hovering around a dirty bin. I also enjoy the visual gags like the patients that are suffering from a Pandemic and having saucepans stuck on their heads, or the Mock Star patients dressed up as Freddie Mercury.

As regards performance, the game runs extremely well on Nintendo Switch with a few exceptions. There are a few instances like when saving your game and everything freezes momentarily. Another moment is when the Awards roll in and everything just stops and takes a little while to go back normal. I would have prefers a smoother transition for this so I don’t feel like my game has crashed every time it loads something up or saves my game.

Two Point Hospital has been a game I have been holding out for quite a while. I loved Theme Hospital on the Playstation and this game feels like a true spiritual successor. I find the humor and visual comedy amusing though the process of actually running a hospital can be quite stressful indeed. Especially when things are not going the way you had hoped and you just can’t seem to make ends meet, Argh!!!! Still, you can just try again from a load point or start afresh, now with a bit of foresight to make right where you went wrong before.

I will admit that it can get a little repetitive at times. While you do learn new techniques and functions throughout the game, there isn’t much change in the way you actually play the game. You build your hospital and then juggle between keeping staff and patients happy (and alive where applicable) whilst managing damage control from fires and hauntings. There is a lot to keep you occupied. However, with every new thing you learn, you won’t be hurrying back too soon to your previous hospitals to improve on them if you have already got the Three Star ranking on them.

I also enjoy the fact that you can zoom in on any situation that unfolds in the hospital. I am not a fan of games that have a fixed camera angle. You always feel like you are on the outside looking in. This isn’t the case for Two Point Hospital, however, you really feel involved and can see how each patient’s treatment is going right up close.

Two Point Hospital is just what the doctor ordered for Nintendo Switch. It is both amusing and challenging and will keep players entertained from beginning to end.