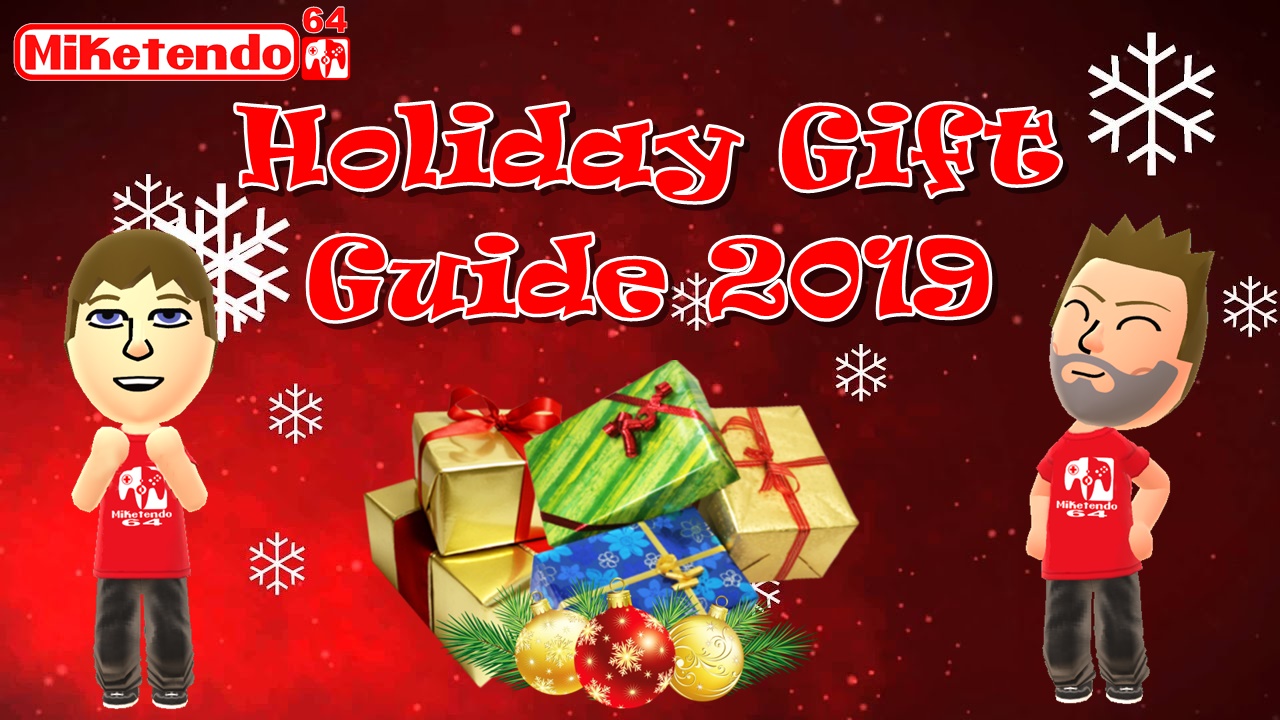 Hello all! With the holidays approaching, we have put together a handy little gift guide. Whether you are searching for something for a certain someone or hoping to treat yourself, we hope you might find what you are looking for this Holiday season in our list below.

Let’s start with the games. There are so many on Nintendo Switch and a lot of very good ones that came out in 2019. Nintendo has had a cracking year with the likes of Luigi’s Mansion 3, Fire Emblem: Three Houses and Pokémon Sword / Pokémon Shield. Third Parties and Indie Developers have also had a pretty great year as well. Here is a list of some great games you should consider picking up for the Holiday season.

The Co-op Mode allows a second player to drop in / drop out as the coffee-based sentient being known as Gooigi. The game also has some great multiplayer challenges that up to eight players can get together and have a spooktacular time ghostbusting or indulging in other activities.

This charming 3D Platforming Adventure game has been given a new lease of life on Nintendo Switch and is all the better for it. Join Lucky the Swiftail as he scours multiple worlds for pages for the Book Of Ages in the hopes to make it back to his homeland of Foxington.

It is a single-player game filled to the brim with charm and while it is not the most complicated of Platformers, it is an excellent game to start for those looking to dip their toe into the world of Platform games. It also makes a pleasant change of pace for experienced players looking for something more casual.

There were a lot of mixed opinions about this game and never has a fan base been so divided. After playing and reviewing the game ourselves, it is a fantastic game to play and while it may lack a National Dex or all 800+ Pokémon, there are still 400 of the critters to catch and train including exclusive Pokémon to the Galar Region.

Based on the United Kingdom, trainers from all over the region compete in the Gym Challenge in the hopes to take on the undefeated Champion Leon. Dynamaxing Pokémon is all the rage as your Pokémon grows immensely in size and battle in huge Stadiums. Trainers can also take part in Max Raid Battles by creating teams of 4 to take down and catch particularly powerful Dynamaxed Pokémon.

It’s no secret that we at Miketendo64 are advocates for the SteamWorld franchise. SteamWorld Quest is an incredible game for those looking to scratch that RPG Adventure Card Game itch. Join Armilly and Copernica on an epic quest to stop an army known as The Void from razing villages and trying to bring back the Behemoth.

The incredible hand-drawn visuals and gameplay alone should be more than enough to entice players to pick up this game. Image & Form have created another playable work of art that will keep you engaged from beginning to end.

What could be more epic than a Raccoon riding a Llama? This is a more recent release on Nintendo Switch but by no means less worthy to be on this list. In a world overrun by greedy corporate Pigs, A Raccoon and his Llama set out to put an end to the abusive mind manipulation of Micro-Transactions.

This retro, 16-bit, action-adventure, Metroidvania game is satirical with plenty of humorous moments that parody real-life issues with the video game industry. As Mobile gaming, Gacha mechanics and loot boxes continue to be on the rise, there comes a point where one must mount their trusty steed (or Llama) and teach those inconsiderate Pigs a lesson.

Zelda, Zelda, Zelda. There is no shortage of love for The Legend Of Zelda in the house of Miketendo64. Link’s newest (and one of his oldest) adventure has him shipwrecked on Koholint Island. He is nursed back to health by the kind-hearted maiden Marin. After being nursed back to health it is not to long before he discovers that not all is what it seems and that everything around him is… a dream!

Though a 1:1 remake of the original, Nintendo and Grezzo really shook things up with visuals. The Claymation aesthetic added a whole new level of charm and wonderment. The inclusion of the Chamber Dungeon also gave players a chance to create their own dungeons with pre-rendered tiles with many different doors, stairs, Entrances, and Bosses to choose from.

Whoa! If you are looking for a Kart racing game that is NOT Mario Kart 8 Deluxe and more on the lines of Diddy Kong Racing on the N64, then CTR – Crash Team Racing Nitro-Fueled might be right up your alley. A remaster of the original Playstation (PSX), Crash, Coco and the gang are back to cause more wacky, racing mayhem than ever before.

The Online Grand Prix mode allows players to unlock newer racers, karts and customization items to add even more bulk to their game. Up to four players can race on a single console or you can race up to 8 players can race against each other online. The single-player story mode provides players with plenty to do if they are looking to hone their skills before taking on others around the world.

This game quite literally came out of nowhere, though there was a hint of it earlier on in the year when a listing appeared in the Nintendo Switch eShop and disappeared just as quickly. Up to two players can work together as Paramedics to help respond to cases of the Dizzies.

Drive the ambulance to the accident scene and then ferry patients on stretchers (or not) back to the vehicle and take them to the health center to be re-orientated. Playing with a friend is certainly ideal but one player can control each character with separate Joy-Con. With several locales to visit from the harbor to the Saw Mill and everything in between, let the shenanigans commence as you bumble your way to saving lives whilst avoiding every pratfall in your way.

The Bat and Chameleon duo return for their next big outing, only this time in a 2D platformer reminiscent of the original Donkey Kong Country Games. It is a single-player experience with multiple levels with status changes that change the environment. The levels themselves are accessed by an overhead 3D overworld that can also change as the player progresses.

It can also be considered the “Breath Of The Wild” of platformers as players can go directly to the boss / final level straight at the beginning of the game. It is extremely challenging to do so and can only be made easier should players go to the other levels to save the Royal Beettalion Guards so they can take more hits as they venture through the Impossible Lair.

Nintendo Switch Joy-Con – You can never have enough Joy-Con. Some games allow up to 4 or even 8 people to play together on the same console. The wide array of different coloured models also give you the freedom to mix and match to customize your Nintendo Switch.

Nintendo Switch Pro Controller – If you like the feel of a more traditional controller, you can’t go wrong with a Pro Controller. Nintendo has its own official controller but there are many on the market now from the likes of HORI and PowerA. The third Party controllers come in a variety of styles and designs and can be either Wired or Wireless. Though they do lack some features that are only available in the Official Nintendo Pro Controller (HD Rumble, Motion Controls, NFC amiibo Reader) they more than make up for it with their more affordable pricing.

External Battery Charger – The portability of the Nintendo Switch is limited only by the size of its battery life. Though the standard model has 4 – 6 hours of battery life and the revised model has closer to 9 hours. However, you can squeeze even more time out of your system with an external Battery Charge that attached to the back of your console. Some models also come with two stands to prop up the console in tabletop mode and even has extra space for a couple of game cartridges as well.

Thank you all for taking the time to read our little Holiday Gift Guide for 2019. We hope it will give you some ideas for this Holiday season. Do you agree with some of our choices? Let us know your thoughts in the comments below. We also have a big Christmas Giveaway going on with several of the games on this list! We will be selecting some lucky folks at random from those that comment on this article on December 23rd. Happy Holidays All and good luck!