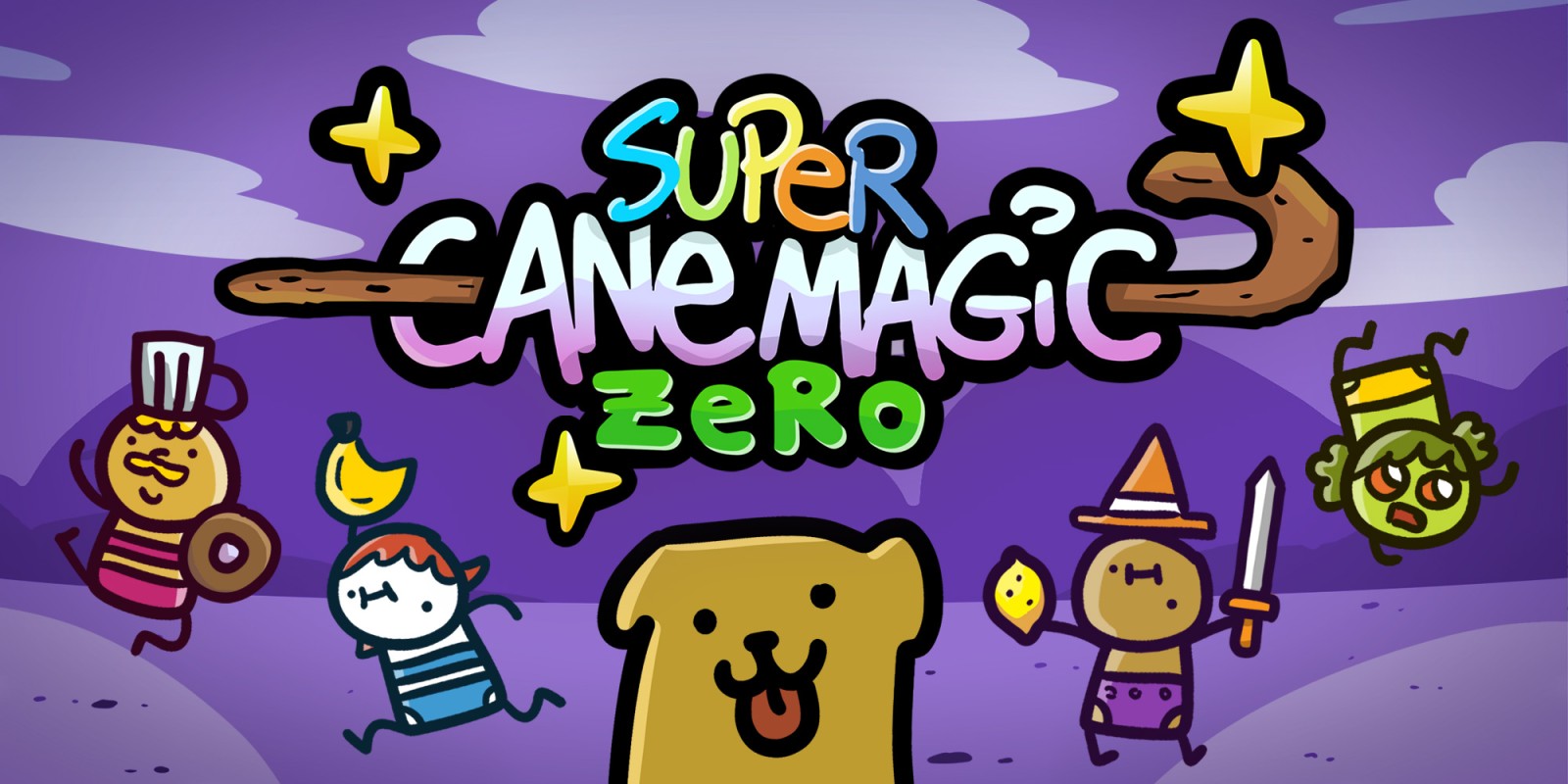 Magic has gone awry on the planet of Wotf, and you begin your journey by awakening shortly after waking up in a crater. You are seemingly an alien being that has come crashing down to this absurd planet, and while your convenient amnesia has left you befuddled and flailing for explanations, you are guided along your journey by sentient animals and food stuffs. Nothing ever really quite makes sense, here, and that’s perfectly fine.

Super Cane Magic ZERO is an overhead action game with some role-playing elements and the occasional environmental puzzle. Combat is carried out through melee attacks and ranged attacks performed by tossing whatever items you happen to be carrying at the moment. You will run across chests, rocks, and other random debris that can be picked up and tossed at your enemies.

If you beat your enemies up in just the right way, you will also be able to pick them up and throw them, too! In addition to a ground full of various missiles, you will also find power-ups and food items, all of which can be eaten. Most food items will restore a bit of health…others might damage or instantly kill you.

The story mode is single player or drop in and out co-op, enabling you to invite buddies along for the ride when it is convenient, or venture forth on your own when it is not. You will gain experience as you defeat enemies, and this experience will level you up and enable you to gain skill points to be used in building different skill trees for your character.

There are 18 playable characters, and they each have varying stats and special abilities. In addition to all of the loot that can be used on the overworld, there is also a large amount of equipment with a somewhat overwhelming, and mostly unnecessary, amount of stats.

Super Cane Magic ZERO is packed full of varying amounts of loot and gear, a dozen and a half playable characters with different stats and appearances, and skill trees to customize your character your own way. The drop in and out co-op means that you can have up to three friends join you at once, and each of them can also customize their character as they see fit.

When you load up a save file with extra people, you’ll have more enemies, more loot, and the challenge will go up a bit to accommodate the fact that there are extra players. In addition to your friends having the ability to drop in and out of the main story with their own customized characters, there is also an arena mode where you two beat each other to death.

If you’re going to be playing with younger players, I definitely recommend arena mode over co-op scenario simply because somehow my youngest daughter always managed to figure out a way to exit out of the level with her button mashing, and with the inexorably long load times, it is devastating to the overall experience to lose progress and so much time to accidental button presses.

Super Cane Magic ZERO goes for an interesting blend of familiar enough sounding music and pseudo-muzak in it’s loading screens. While the soundtrack is pleasant, and suits the overall odd atmosphere of the game, the loading screen music is too short to avoid becoming repetitive.

It helps keep itself from ever becoming annoying by using the muted tones that are often found in elevator music, but also calls to mind the load screen music of Parappa the Rapper and Um Jammer Lammy where they took the music from the game, but stripped away all but the basic drum beat and occasional blips and chirps of the root note

Sound effects in-game are mostly satisfying, but some of the hit/explosion noises are so familiar that it takes you out of the game because it makes your mind go racing for where it comes from and why it is just so familiar.

They enlisted a specific cartoon artist to create an absurd world full of fanciful objects and gear that is instantly recognizable and as flamboyant as possible. Most of the characters are little more than fleshed out stick figures, and there’s absolutely nothing wrong with that at all.

The game runs pretty smoothly, as could be expected from a game designed with stylized, cartoony graphics in mind. The best comparison I can really come up with is that when you think of how a professional artist would recreate the scribblings of a child’s doodlebook, that’s what Super Cane Magic Zero looks like.

However, the game’s biggest issue is it’s ludicrous load times. I often spent 2-5 minutes waiting for a new screen to load, all the while listening to the same 30-45 seconds of music. While the game is loading, you are treated to a lot of random little non-sequiturs that sometimes are making light of other load screens, and other times just random shameless plugs.

This is a novel approach, to be sure, but it still doesn’t help that one in every ten times that you go to a load screen the game will just freeze. You’ll then have to start back from the last auto save point, and hope it isn’t too far back. It usually isn’t, but once I beat a boss and exited a level, only to have the game freezes up when returning to the overworld, and I had to beat that level and boss all over again.

It is a very humorous take on the traditionally serious action fantasy worlds, but it’s long loading times and freeze screens make the game basically unplayable other than old school style gauntlet sessions where you pause the game and leave it open while you go to work. Even then you’ll come home to be greeted to another load screen on every new level and always have the anxiety of the game locking up and costing you progress, and time.

Super Cane Magic ZERO has novel ideas, but they are poorly executed. If the load times can be shortened and the freeze-crash addressed, there might be a fun multiplayer experience. As it stands now, however, Super Cane Magic ZERO is a collection of some of the more entertaining loading screen messages and very little actual gameplay.