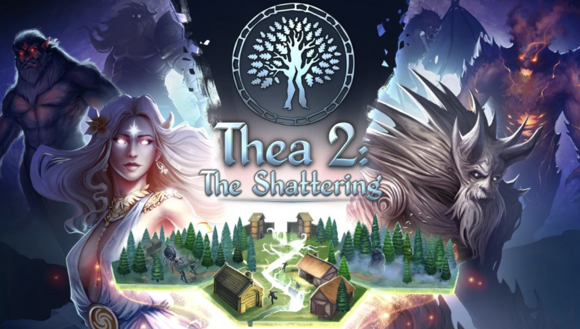 MuHa Games have announced that they will be presenting Thea 2: The Shattering at EGX Rezzed 2019. The long awaited sequel to Thea: The Awakening will proved more content and enhanced gameplay. The game will be available for Early Access on Steam on November 30th. There is no news whether it will be coming to Switch but as soon as we know, we will be sure to share the news.

We have an official announcement from MuHa Games below as well as a trailer for Thea 2: The Shattering.

This year the Polish-British developer, MuHa Games will be showing the long-awaited sequel, Thea 2: The Shattering at EGX Rezzed 2019. Thea 2: The Shattering builds on the best and most distinctive elements of the former title in the series and provides much more content, enriched and enhanced gameplay, as well as new, innovative ideas.

ABOUT THEA 2: THE SHATTERING

Thea 2: The Shattering offers a unique blend of 4X turn strategy, RPG, survival — and an original card game with a dark fantasy setting — all inspired by Slavic mythology and culture. Players take on the role of gods, overseeing the actions of their tribe of followers, while navigating a procedurally-generated environment. They will decide on a favoured play style and build on it during their adventure: they may wish to simply explore the world as nomads, take on all comers as a warlord-led army, or master the art of diplomacy; building alliances with other factions and trying to ensure the peaceful survival of their worshippers. An atmospheric musical score and moody visuals provide a perfect accompaniment to a carefully-crafted Slavic narrative.

MuHa Games began in 2010 as a two-people project, initially creating browser and flash games. In 2015, with the launch of 4X strategy Thea: The Awakening on Steam Early Access, the team members have left their previous jobs and started to develop indie games full-time. Currently MuHa Games consist of three people working from the United Kingdom and another two in Poland. All have huge experience developing AAA titles – they have worked on titles such as: Witcher 2, Witcher 3, Project Cars, DiRT Showdown and Operation Flashpoint: Red River.