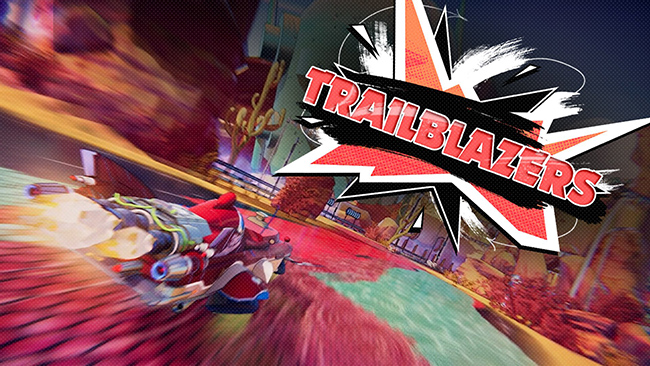 Feel like the Nintendo Switch could do with more innovative racing games? Well you are in luck as a new Co-operative racing title is coming to the Nintendo Switch and other major platforms. Rising Star Games have partnered with Supergonk to bring  Trailblazers to all major platforms. Trailblazers has you working together with your team mates to paint the tracks you are racing on which will allow you and your team mates to boost on your colour. Race in teams up to 3 vs 3 painting the track as you race, capturing key areas to change the racing line dynamically allowing other the other members on your team to be able to boost and essentially win the race.

Racers can also amass skill points to blaze their way to victory by driving with flair and style. Players can play with up to five other players online or locally via split screen for up to four players with additional online or CPU-controlled challengers in blistering high-speed action.

Here is the Official Press Release.

“The Supergonk team is proud to announce Trailblazers: our vision of true co-op racing designed from the ground-up with team play at its core”, said Ben Ward, founder of Supergonk. “The brand new paint/boost mechanics introduce a fresh layer of second-to-second strategic thinking which can’t be found in other racing titles. As huge racing game fans, we feel that the genre often hasn’t been as innovative as we’d like. Our aim with Trailblazers is clear: create a brand new IP to reinvigorate the genre and build an unexpected new racer that we ourselves want to play”.

Loaded with multiplayer thrills and a series of single-player challenges across an extended campaign mode, Trailblazers is an audio-visual onslaught of retro-futuristic style and attitude. The game takes place in a lavishly presented world from the creative mind of BAFTA award winning artist Will Milton. Players race through expansive and stunning scenic tracks set across locations ranging from mountain tops to lush forests and arid desert valleys. Aural soundscapes are provided via the officially licensed soundtrack featuring leaders of the Future Funk genre, including Get On Up by Skope, Bad King Kong by The Derevolutions, and Dead Ringer by A.Skillz.

In Trailblazers players will race as, and alongside, a diverse cast of characters. Each driver plays a vital role in the racing community and unfolding story of the Trailblazers world, and each has a unique role and driving behaviour. Players can also choose from a showroom of the fastest race cars in the galaxy, each with customised stats to fit every play style and track type.

“We are thrilled to have worked alongside Supergonk to help realise their vision”, said Martin Defries, Managing Director of Rising Star Games. “The game is superb, the ambition high and the opportunity vast. We are keen to show the gaming community across the world just how great this game is”.

Trailblazers, developed by Supergonk and published digitally by Rising Star Games, will be available globally from Spring 2018 across all major gaming platforms. Keep your engines running for incoming additional information about gameplay modes and features of this ground-breaking new arcade racing title, by following Rising Star Games on Instagram, Twitter, Facebook, or visit the Trailblazers website.