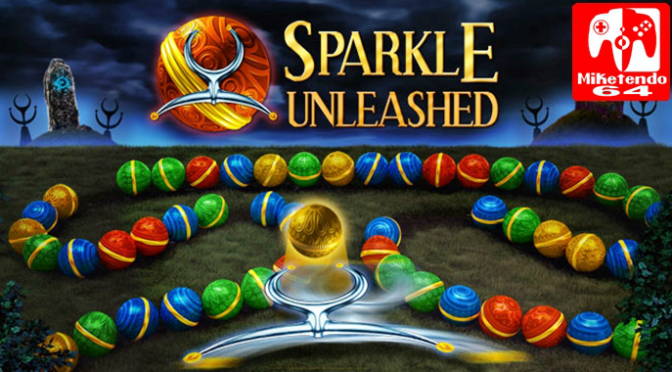 Sparkle Unleashed is a match-3 puzzle game where you launch orbs into a steadily moving line of marbles. If this concept sounds familiar, you’ve probably played PopCap’s Zuma or even 10tons’ own Sparkle 2. In fact, Sparkle Unleashed is almost identical to Sparkle 2 with one primary difference; instead of firing orbs from a stationery, rotating crossbow, your orb slinger now moves freely on the bottom of the screen.

This alteration doesn’t significantly change the concept of Sparkle. The gameplay still revolves around a constantly moving line of colored marbles that travel along a predetermined path leading towards a hole. If too many marbles fall in, you lose. To destroy a group of marbles, you use the aforementioned slinger to fire your own colored balls, making matches of three or more. If you deplete the entire supply, you move on to the next level.

The slinger isn’t affixed to a single location as it is in previous Sparkle games. You can move it in a horizontal line on the bottom of the screen, but it can only fire directly upwards. As a result, aiming feels more consistent, and you only have to worry about correctly positioning your crossbow under the marbles. As a plus, when using the Nintendo Switch’s touch screen, the slinger will instantly travel to any point on the axis and shoot. While the controls and viewpoint are different from Sparkle 2, it essentially plays the same. I only marginally prefer Unleashed’s style. Otherwise, they both function decently. That said, it’s not a particularly original game, even by its own standards. The concept would have functioned better as an alternate mode within another Sparkle game.

Nevertheless, if you haven’t played a game like this before, it’s not a bad gateway at all. You play through a fantasy story, which while extremely generic, provides a good backdrop for a single-player game. Unfortunately, the game becomes repetitive very quickly. There are over 100 levels, but many of the stage designs are repeated throughout. The only differentiating factors are faster ball speeds, additional colors, and gimmicks like extra-durable chained orbs or colorless rocks.

Although much of the journey can feel like a slog, some elements keep it from being too boring. First of all, the game ramps up in difficulty quickly. The balls travel relentlessly, providing that all-important sense of challenge. After losing a round, I felt more compelled to try again. And to outdo myself, I would have to make chains of multiple matches in a row, which itself is a satisfying feat. For every three matches, you are rewarded with a helpful power-up, such as a spray that turns multiple orbs the same color or magic that sends the entire row backwards. There are 18 power-ups that you earn as you play. But what makes the progression noteworthy is that you can choose which powers to unlock within miniature skill trees. Although you can only equip one power from each of the six trees at a time, it’s an effective loadout system that adds a nice customization flair. Finally, some levels employ different rules for a nice change of pace, giving you an endless onslaught of orbs and asking you to survive for a period of time. There is also a more fully-featured survival mode, but the game only grades you in five star increments as opposed to a score, which considerably limits the replayability.

The visuals are fairly good for a puzzle game. The fantasy backgrounds look nice, the marbles sparkle with luster, and a colorblind mode provides accessibility by adding designs to each ball. The orchestral music is also significantly well-composed, providing Harry Potter-esque tunes that change with every level. And the voiced story narration is a welcome touch.

The Nintendo Switch is steadily becoming saturated with puzzle games, and it doesn’t help that Sparkle Unleashed is already very similar to 10tons’ own previous offering, Sparkle 2, with the only significant change being how the orb slinger moves. I liked the presentation and the progression system, but the game grew tedious over time. Because of the repeating levels and underwhelming survival mode, it only takes a few hours to see everything this game has to offer, and that’s only if you can see it through to the end without growing tired. Between Sparkle 2 and Sparkle Unleashed, match-3 puzzle fans may find it worth it to try one of them depending on preference, but it’s unnecessary to play through both.