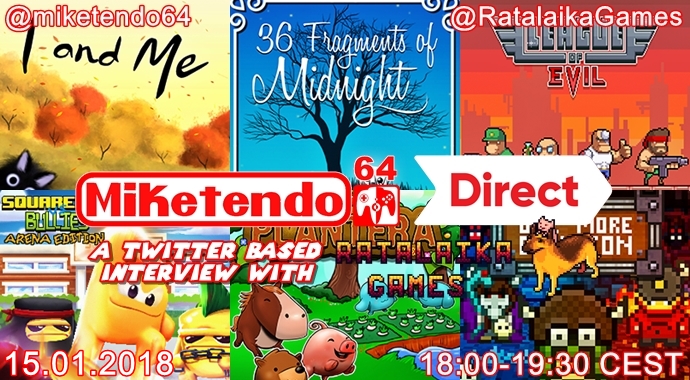 UPDATE (14/01/18): The Ratalaika Team are feeling better and the Twitter interview will now happen during the same time slot as before, but now on the 15th instead of the 12th like we had intended.

UPDATE (10/01/18): While the Twitter interview will still happen, we are currently putting it on hold, until stated otherwise, due to the Ratalaika Games team being unable to partake this week.

Our team is sick due to the flu, we will be quiet for a few days. If you write us please have that in mind! #gamedev #indiedev

With tensions running high, wondering as to when the heavily rumoured Nintendo Direct will occur, we do have an alternative for you.

Although we can’t magic up a Nintendo Direct for you out of thin air, we can at least bring back the old Miketendo64 Direct things we used to do, but merge with yet another of our Twitter based AMA’s and this week it will be with none other than Ratalaika Games. With a new announcement to go live a littler later this week, we’ll be catching up with the Spain based developed to be talking about it, only because the interview will be Twitter based, everyone with a Twitter account will be able to join in with the public interview and ask a couple of questions of your own.

There will be a few things Ratalaika Games’ Adrian Vega, won’t be able to comment on, such as unannounced games, but there are plenty of games that he can discuss and you can see the list of them on the Ratalaika website, with the following link:

As for reasons why you should join our Twitter interview, for starters, you will get to hear some cool game news straight from the source, especially news concerning the game that is to be announced this week. Secondly, you will get your chance to ask a question or two of your own, but lastly, we actually have 5 NA and 5 EU Nintendo Switch keys for One More Dungeon to give away and 10 of those of you who happen to be following both @miketendo64 and @RatalaikaGames and ask a question, will randomly be selected to win a code for One More Dungeon, once the interview is over.

So save the date, add it to your diary, bring yourselves and bring your questions! This is one AMA/Interview you won’t want to miss!