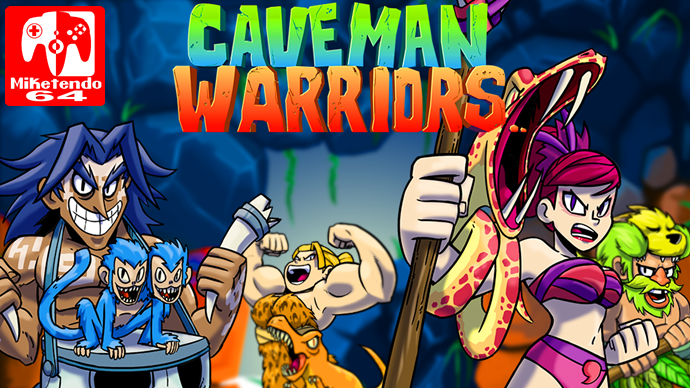 Get ready to go back to a time where dinosaurs still roamed the earth and Loincloths were still in fashion. Then, to shake things up, throw in some aliens, tanks and dino motorcycles. It’s time for our Caveman Warriors Review!

In October 2016, Jack, Ashleigh & I went to Barcelona Games World. We had an amazing time and got to play a lot of Nintendo Games that we haven’t played before. We got to meet Charles Martinet, the voice of Super Mario, and we had the opportunity to experience games that had not yet come to mainstream gaming yet. One such game was Jandu Soft’s Caveman Warriors, A modern take on the 80’s Arcade side-scrolling beat ’em ups that gives you a choice of playing as four different warriors, both male and female, each with their own unique weapons and abilities that you aid you to get past the many hazards and obstacles you will face.

There is no tutorial per se, however there are plenty of large rocks with paintings on them to describe the controls, techniques and how to change characters. I find this more appropriate than written text boxes as I am pretty sure Cavemen couldn’t read actual words as the written word hadn’t been invented then. Though I must admit, the fact that finding a lot of modern inventions throughout the game does show that Caveman Warriors isn’t completely historically accurate but then again, that’s not really a bad thing.

An Alien invader has come from a distant planet and has abducted some cavebabies. It is up to Jack, Liliana, Moe & Brienne to rescue the cavebabies from the dastardly Alien and club and smash anyone and anything that oppose them. As you progress through each of the 16 levels available, The Warriors will travel through time and space via dimension portals and have you riding dinosaur motorcycles trying to escape a leather jacket wearing cybernetic organism, or piloting an airplane to attack Jackboot Trunching Soldiers.

Being an Arcade game, you have three lives to make it to the end of each level. There are several checkpoints that you can activate which will respawn you should you lose a life. Losing all 3 lives will take you back to the course select screen. As you progress through each level, you can increase your score by defeating enemies and collecting what they drop. Sometimes they can reward you with anything from 50 points to 1,000 points. Of course, getting the high score only really matters when playing in multiplayer but when objects start appearing that looks like a Gameboy or Super Mario’s Cap, you can’t help but feel a desire to collect them. Enemies also drop food items as well that replenish health and can be anything from a chicken drumstick to a soda cup.

Caveman Warriors has a hand-drawn aesthetic that just looks incredible, almost like a moving cartoon. The details are sharp in full HD and are just great to look at in handheld mode as well as it is on TV. The music is upbeat and is reminiscent of the good ol’ 80’s Arcades but with plenty of modern flavour. In keeping with the whole cartoon comic book feel, each cut-scene is a short sequence of panels in comic strip format along with sound effects to fill the player in on the story as it progresses.

Each Level is made up of three sections that are connected together by the spit roast fires that make up the checkpoints. In each level there are various secret areas that can contain batteries. There are three batteries in each level and collecting enough of them will open up new levels to play. Secret courses can also be found on various levels so always be on the lookout for any shortcuts or hidden passages. There are also sub-bosses and a main boss to defeat on each level so be sure to maintain a good health bar, you never know when you may need it.

The Gameplay is straightforward in consists of fighting your way through many different baddies until you reach the boss. You can play alone or with friends and, regardless of the character you originally chosen, you can swap between characters except for when all characters are being played at the same time via 4 player as you can not have more than one person playing as the same character. Though if you really wanted to, you could always just swap Joy-Cons with each other.

The controls are easy enough to learn and consist of a Jump, standard attack, special attack, special ability, character swap and the control stick for moving. You will need to make good use of each technique, especially the Specials as they use up the stamina bar. The Stamina bar can be replenished by collecting certain items and also automatically over time if you don’t use your specials for a short period. The special abilities and attacks can be used to overcome specific obstacles like Jack’s charging run that breaks through blocks or Liliana’s throwing spear that helps create a temporary platform to jump onto. As each level will require different techniques in order to progress, swapping between character becomes very useful in order to take advantage of their special skills.

When playing in multiplayer, each player can play with a single Joy-Con, or opt for the Joy-Con Grip or Pro controller. But with its simple enough controls, everyone can still have a good time with just a Joy-Con each. There are no tricky combo attacks to master which in a way gives the game a level playing field to both novices and arcade game experts and both can enjoy it for the wacky fun that Caveman Warriors is.

An extremely fun and entertaining romp with plenty of pop culture references to enjoy on your own or with friends. It is clear to see that Caveman Warriors takes inspiration from various platformers, arcade games and even action games like Metal Slug (I did mention this game had tanks right?). If you are looking for a game that takes the foundations and is not afraid to shake them and mix up the formula, you can’t go wrong with Caveman Warriors.