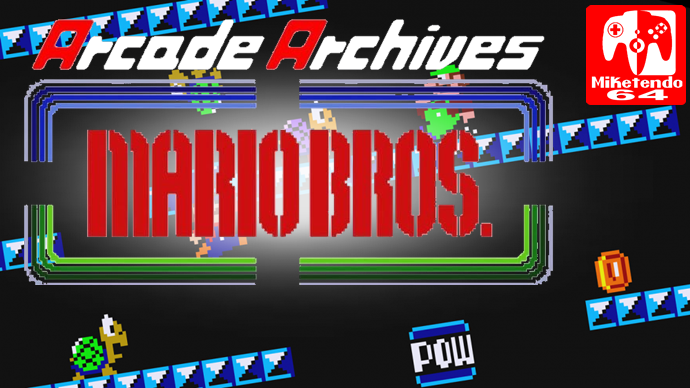 There was once a time where Jumpman became Mario but had yet to earn his “Super” status. He and his brother Luigi were ridding the pipeworks of nasty critters that have been clogging the pipes. We are of course talking about Mario Bros.

Before Mario became a world famous video game icon saving princess toadstool from King Koopa, yet after rescuing his First Love Pauline from Donkey Kong, he and Luigi starred in Mario Bros. An Arcade game that would allow up to two players to play together or against as they try to get a high score squashing turtles, crabs and angry flies that appear out of the pipes above. Arcade Archives have brought the nearly forgotten title back into existence and given it a bit of polish and ported it to the Nintendo Switch.

Mario Bros is an action game that has the simple objective of dispatching enemies by flipping them over from underneath the platforms and then kicking them whilst they are immobilized. It sounds simple enough but enemies can become faster and fireballs can home in on you making your task of getting an impressive high score much more difficult. You only have three lives and a single touch of an enemy that isn’t immobilized can kill you. Mario Bros. comes straight from the 8-bit era and brings all the 80’s video game goodness with it, along with some touches to the gameplay controls making them much more responsive whilst still maintaining some of their awkward charm.

The legendary POW block can be used to flip multiple enemies at once if they are touching the ground which can be very helpful in a pinch but also only has limited use. Once it has been hit 3 times, say “bye-bye” to the POW block as you now have to take on the ever increasingly faster enemies that spawn on the later levels. After several stages, a new enemy will be introduced along with a short cut-scene showing how to dispose of them. Though both Mario and Luigi are playable, you can only play as Mario in single player so sorry to all of you Luigi fans out there but you will just have to suck up being player two again.

Being an Arcade Archives game, your high score is recorded and can be registered on the online leaderboards providing you have an internet connection. You will then be able to lord it over your friends if you have beaten their scores and many others around the world, who doesn’t love a bit of gloating? (Well, maybe those that have nothing to gloat about).

There are three different modes available to play which all pretty much offer the same thing just with different parameters. There is Normal mode which is basically the game as it is but with the option to save game progress and load it up again after reopening the game application, Caravan mode gives you 5 minutes to get the highest score as possible without a save option. Then there is Hi Score Mode which as the name suggests, is a go for gold mode where there are no saves and when all three lives are gone, it is game over and there is no save game option here either.

Being a simple arcade game, it lacks any real depth and so what you see is what you get. It is a single stage that sometimes the platforms can be covered in ice to make the platforms slippery. Every now and then, you will reach a bonus stage that has you try and collect as many coins as you can in a given time to help raise your score. The controls are relatively simple and mainly consist of the ‘A’ button to jump and the Left/Right directional buttons (or Left Joy-stick) to move. Movement can be a little stiff but then it always was. There have been tweaks though to make the controls a bit more responsive.

Other than the three extremely similar game modes, there is nothing else to Arcade Archives Mario Bros, even the Donkey Kong has more variety with it’s three different stages and a number of items to collect which add points to the high score. It is nice that they kept the original screen ratio but it would have been more appealing if the game was updated to fit the full 16:9 screen or even offered a modern graphic palette to give it something new or at least look a bit meatier.

Another nice title to own but to be fair there are plenty other games that probably deserve your hard earned cash. The Mario Bros game is a one and done title and I don’t think it is actually worth the $7.99 price tag that it has on it. All the levels are the same with only different variants of enemies and the inclusion of extra hazards. You will probably come back to this time after time to play it after finishing up Super Mario Odyssey, collected all the Korok seeds in The Legend of Zelda: Breath Of The Wild, Reached the highest rank in Splatoon 2 online Multiplayer, 100% Xenoblade Chronicles 2, wash the car, reform the house, redecorate the garden and then if there is time free, maybe you could squeeze in 5 minutes to play Mario Bros when there is nothing else left to do.