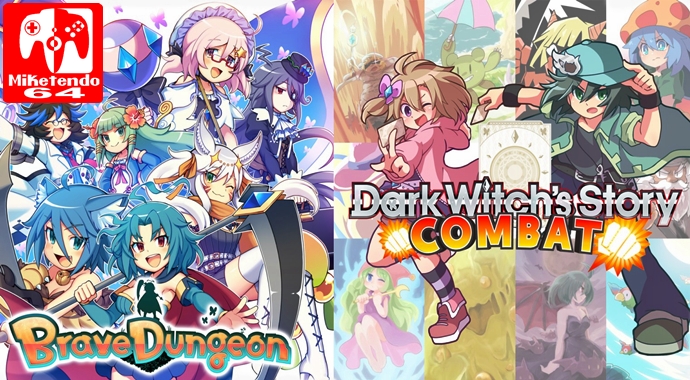 The Legend of Dark Witch is one of those little-known eShop franchises that’s revered by the few who have heard of it. The Mega Man-esque platforming games in the main series were some of the best budget games on 3DS, and even rhythm spin-off Rudymical has its charms once you turn off the high-pitched anime shrieks. Brave Dungeon is the fourth title in the series, and after a release on 3DS earlier this year it’s brought its special brand of RPG dungeon crawling to the Switch – and rest assured, this is one dungeon you’ll want to explore.

After a classic bait-and-switch opening where protagonist Al (as in Albert… yes, the names in this game are very odd) gets her derriere handed to her by some overpowered monsters, you’re brought to the main town where you do the vast majority of your business. Alongside Al, who must be in your party at all times, you can bring two of six potential party members into dungeons with you. It pays to take a dedicated healer like Stoj or Klinsy as well as an all-out attacker such as Rudy or Papeline, but you’re free to customize your party however you wish. Each character starts with a basic attack, a special skill, and a Revenge Attack that deals massive damage but can only be used once you’ve been hit by enemies enough times. It’s pretty standard stuff, but unlike most RPGs, you gain only minimal benefits from leveling up. Instead, character progression is handled through Tres, the game’s currency. When back at the main hub you can spend Tres to level up a character’s Attack, Defense, Mind (status effect potency), and Agility. You can also change classes at certain levels, which is basically just a fancy way of saying you further increase your stats and gain one of two new abilities.

When not pummeling foes into oblivion, you’re mapping out dungeons and collecting materials used to craft new items and equipment in town. It all seems like a lot to keep track of, but as someone who struggles to get into anything more complicated than Dragon Quest, Brave Dungeon proved to be a surprisingly comfortable and relaxing game. Enter a  dungeon, beat up some baddies, then go back to town and power yourself up to do it all again. As an RPG you can easily spend hours playing it on the TV, but the structure of the dungeons is also extremely suited to short pick-up-and-play sessions in handheld mode where you can feel like you’ve made solid progress by clearing a dungeon or two.

In classic Dark Witch fashion, the art comes in two forms: beautifully illustrated 2D drawings used for character portraits and backgrounds, and strangely stubby sprites with a surprising amount of animation frames for everything else. There’s a very doujin feel to everything, if that makes any sense, from the quintessentially MIDI music to the very basic and generic way menus and text are handled. Fans of niche Japanese PC games will feel right at home with Brave Dungeon’s charming and awkward presentation.

But wait! I seem to be forgetting something… ah yes – also included is Dark Witch’s Story: COMBAT, a bonus side game exclusive to this Switch release with no connection to the Brave Dungeon side of the package. You play as a young boy in the real world who takes part in a card game based on the fictional Dark Witch universe. Fights take place using the same backdrops and sprites as the main game, and it’s a clever way of reusing assets while adding more value to the package – at least, it would be if the “gameplay” weren’t shockingly bad. You pick three cards from your deck and send them into battle against an opponent. Each card has its own health and Tres points, as well as a rock/paper/scissors symbol that determines whether or not they will sometimes perform a critical attack on the opponent. After the initial set of Rookie fights, you also get the ability to attach a magic item to each card that offers additional benefits such as healing your character or poisoning the enemy.

And… that’s it. There’s literally zero interactivity to the fights once you’ve chosen your cards and items. Your fate is completely at the mercy of whatever the computer has picked, so if all of your cards happen to go up against the rock/paper/scissors symbol they’re weak against, you lose. If the opponent’s cards have better stats than yours, you lose. Even if your strategy is indisputably foolproof and takes into account all possible permutations of cards and abilities, sometimes the enemy will just randomly pull an extra attack out of its rear end and – you guessed it – you lose. You don’t even get the luxury of trying out many strategies, since the comically low card drop rate means you’ll be stuck with the same couple of cards to choose from unless you’re extremely lucky. The worst part is, the game is completely aware of its shortcomings. The little girl who serves as your tutor and comic relief straight up tells you early on that you will lose often due to luck, and the only way to win is by repeatedly losing battles and gaining Tres to level up your cards until they can dominate your foe without trying. Why would I want to suffer through a game where I literally cannot win until I get better cards than the opponent? What do I look like, a Hearthstone player?

Not since Kingdom Hearts: Chain of Memories have cards been such an unwelcome addition to an otherwise perfectly fine game. Normally I’d be tempted to knock the entire package down a few points for justifying a price increase from $5 on 3DS to $8.99 on Switch by including such a terrible add-on, but between the ability to play the game on both a TV and an HD handheld screen, as well as the addition of two extra party members not found in the 3DS version, I’d say Brave Dungeon alone is worth the extra $4 on Switch even if you never touch Dark Witch’s Story: COMBAT.

Brave Dungeon + Dark Witch’s Story: COMBAT is a fun dungeon-crawling RPG with great gameplay and a lot of heart – just pretend the last four words of its title don’t exist.

*Review Key Provided by INSIDE SYSTEM