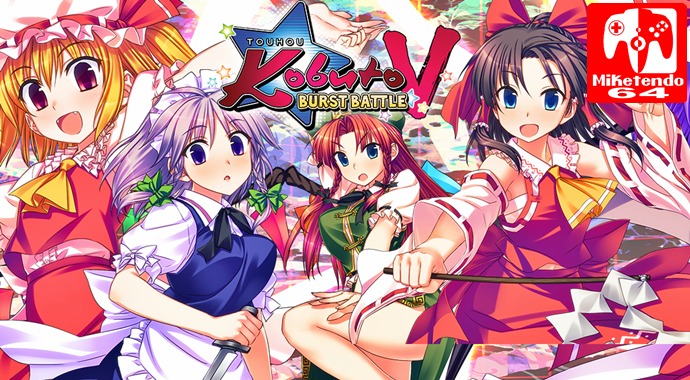 Before I can begin, this is a review that requires a little backstory, so here goes:

The Touhou Project is a series of PC-exclusive bullet hell shmups created by Team Alice Shanghai, which actually consists of just one guy known as ZUN. None of these games have been officially released outside of Japan, as the creator insists on handling the franchise entirely by himself. Instead, he allows fans to freely make their own titles based on the series, and in recent years has even begun to let them be released on consoles like PS4 and Vita. As a result, most Western gamers’ only exposure to Touhou has been through these ascended fangames of dubious quality, and unfortunately Touhou Kobuto V: Burst Battle will not be the game that turns anyone into a true believer.

Touhou Kobuto V: Burst Battle is a 3D arena fighting game/shmup hybrid where you choose one of nine adorable anime girls and fight to the death using all manner of colorful bullets. Each character has three basic ranged attacks with multiple varying properties based on whether you’re jumping, dashing, or holding the shoulder buttons, as well as three melee attacks that can only be activated while near the opponent. You also have an Action meter used to dash and cancel out of attacks, plus a Charge meter that allows you to pull off a powerful Spell Card super attack when filled. There are enough mechanics here to make for a decent fighting game, but the execution is just plain poor. Every single character feels identical in how they jankily move about each arena, and attacks feel extraordinarily similar regardless of who you’re playing as. It doesn’t help that the eight different stages can all be separated into two types: a completely flat and empty arena, or the same flat and empty arena with some walls randomly strewn about. Every fight basically just comes down to dashing around while spamming your most powerful move to end the boredom as fast as possible. After a few minutes of gameplay, you’ve seen everything Touhou Kobuto V has to offer.

In terms of modes, the offerings are meager regardless of whether you’re a single player or multiplayer gamer. Story Mode takes you through six battles with visual-novel style sequences before and after each. The game expects you to already know about the Touhou characters and world, so if you don’t understand why impish ice fairy Cirno takes offense at being called “⑨” or why the final boss is the giant disembodied head of shrine maiden protagonist Reimu, too bad because it’s never explained. Arcade Mode and Score Attack are just endless fights against CPUs with the goal of getting a high score, so the tedium never has to be broken up by those pesky cutscenes. VS Com lets you fight a standard battle against any character on any stage with any song, and even offers a training mode for anyone foolish enough to seriously put time into mastering the mechanics. Finally, VS Human and VS Online let you fight opponents through either split-screen, local wireless, or the internet. And I’m just guessing on that last one, I repeatedly attempted to find an online opponent and found the servers empty every time. Do not buy this game for the online play unless you already have someone you know will play with.

At least the game is filled with fanservice, for whatever that’s worth. Every member of the cast has a suitably cute chibi look despite the dated PS2-era visuals, each attack is ripped straight from the characters’ original shmup move sets, and classic songs from the series like “U.N. Owen was Her?” and “Tomboyish Girl in Love” can be heard during battles – but ultimately, what good does it do? Touhou Kobuto V: Burst Battle is an extremely shallow fighting game that Touhou neophytes will find impenetrable and Touhou diehards will find unbearably boring. Even for those willing to give the unique mechanics a shot and become the king of danmaku battles, the dead online lobbies ensure that your efforts will go wasted. This is a game for absolutely no one, which makes its retail release and $30 price tag even more bizarre.

In what I can only assume is an attempt to further nickel and dime the few loyal fans who would actually pay full price for such a weak package, NIS America has also released paid DLC for the game just days after its release. The Koishi Komeiji DLC adds a tenth anime girl to the roster with her own story mode and the “Hartmann’s Yokai Girl” BGM. The Touhou wiki states that “Koishi’s presence cannot be felt by anyone unless she has entered their direct field of vision, and is forgotten as soon as she leaves it”, and I can’t think of a better way to describe this bit of extra content. She plays pretty much the same as every other character, with her only distinguishing traits being a bubbly personality and penchant for saying “moshi moshi!” at every opportunity. That being said, she only costs a mere $.50, so if you like Touhou enough to have actually bought this game then you’re probably going to get this dirt-cheap DLC anyway.

For a system that’s already got no shortage of fighting games to choose from, this may be even less essential than Ultra Street Fighter II. I’d say only the most dedicated of Touhou fans should bother with this, but even then, they probably wouldn’t be interested.