[Feature] Wraith Games, Konami and the Future of Castlevania 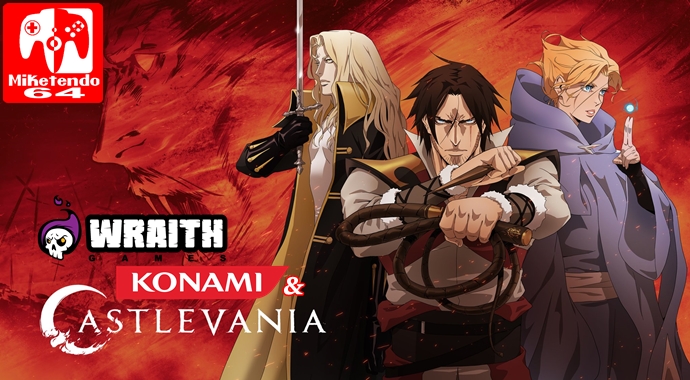 In the video gaming industry, things can go very right or they can go very and for the Castlevania Netflix series, things have gone very well indeed and although we have reached out to Konami to talk about the success, we thought it would be interesting to talk to someone else in the same industry for an alternative view while we wait for Konami’s response.

So we reached out to Wraith Games and spoke with Jay Kidd to see what does he make of it all and if he and Wraith Games as Konmai, had the chance to make a Castlevania game and this is everything he had to say:

Konami may not have anything to do with the Success the Castlevania Nextflix series has attained, but it is responsible for creating an iconic series. So how do you think Konami should react to the series’ success and where should they go from here?

Jay Kidd: Ultimately, the Castlevania Netflix series was a passion project for writer Warren Ellis. Due to the fact that it took so long to get out of development hell (and the fact that it really only got made because of outside funding) it’s pretty safe today that Konami didn’t have much faith in it. In fact, the limited nature of season one really feels like they were just testing the waters to see if continuing was even in their best interest.

That being said, with how popular the series has become, I guarantee that they [Konami] will be rethinking not only their stance on the Netflix series, but also how they’ve been treating the franchise as a whole. Maybe with Sonic Mania doing so well, we might just see a “retro revival” of sorts… possibly with a focus on the Switch?

Well since you touched on Sonic Mania, if you were Konami, what would you be doing with regards to SEGA’S creation and if you were responsible of the retro revival, how would you do it?

Jay Kidd: Well, if I were in Konami’s shoes, I’d be paying very close attention to Sonic Mania’s success. Both Sega and Konami share a lot of the same essence: they were both movers and shakers in the 8 and 16 bit eras, they struggled to find an appropriate foothold in the 32 and 64 bit eras, has a fair bit of success in the 6th and 7th console generations, but never to the heights of their more formative years, and let’s not forget that they are both brands that struggle with the dichotomy of new modern, experimental titles and attempting to capture that nostalgia factor… both of which they’ve been having a fair bit of trouble with lately. So, much like with Sonic over at Sega, Konami just doesn’t seem to know what to do with its classic franchises… Castlevania especially. Of course, the exact same thing can be said about Capcom as well. It’s almost fitting, since a company that DOES do this balance well is Nintendo, a company that fans have often asked just scoop up Sega, Konami and Capcom in some sort of hostile takeover (or however fans immagine the industry works).

This makes Mania an interesting beast, while Sonic has struggled to settle down with its own identity in recent years (on consoles at least, the Advanced trilogy and Rush Trilogy were fairly solid), it’s a small group of fan developers who were able to revive what made Sonic great in the first place. Castlevania has had much the same identity crisis (with the GBA and DS titles, again, like with Sonic, being very enjoyable). In the PS2 era it wanted to be Devil May Cry, and in the PS4 era it wanted to be God of War. It’s screaming to be taken back to basics; maybe also by people within the fan community.

Speaking of, you asked me how *I* would design a Castlevania game? It would be an all-new 2D romp with 32 bit sprites. The interesting thing about Castlvania, however is there are really 2 types of fans: “Castlevania IV” fans (who also like 1,2,3,X, Bloodlines, etc) and “Symphony of the Night” fans (Aria of Sorrow, Harmony of Dissonance, Dawn of Sorrow, etc). I think we can appease both.

It would be a big undertaking, but it would be worth it. A game like this could bring legitimacy back to the franchise, but a quick cash-in chasing Mania’s success would just bring another “Harmony of Despair” or “ReBirth”; good games, but just that… good. Konami needs great, and Castlevania (and the fans) deserve its Mania.

Cheers Jay, it’s always great chatting to you and we thank you for indulging us with this little experiment/article. With a bit of luck, we’ll be hearing from Konami on all this real soon.

[Editorial] Wheels of Fortune and a Very Shiny Stunfisk