5 Weeks of I and Me (a Miketendo64 Giveaway) 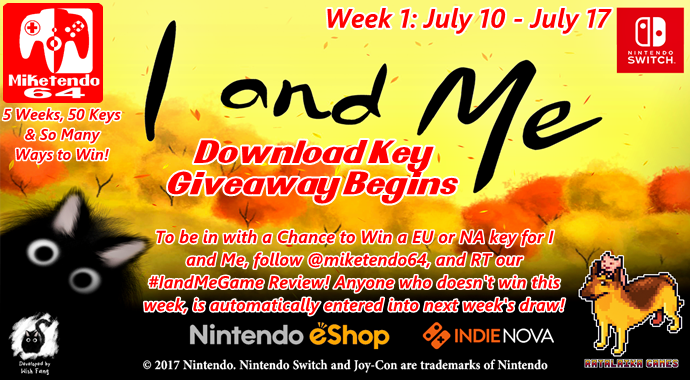 At Miketendo64, we love our giveaways and because there’s never been a giveaway for Switch, where 50 download codes of a single game were available to be one, we wanted to be the first!

So here is what we did. We joined forces with Ratalaika Games, who brought I and Me to Nintendo Switch for Europe on July 6th whilst Rainy Frog Games brought it to Japan on the same day and we were given 50 codes to do as we please! Therefore because it is 50 codes, we want to make the giveaway to be special, so instead of giving them out in a single week, we’re giving away 10 a week, every week, for 5 weeks, so that way more people have a chance to win.

In fact because we want more people to be in with the chance to win, we actually ensured the rules for this week’s giveaway, was simple. To be in with the chance to win a code for I and Me, all you have to do is follow us on Twitter, share our review in any way of your choosing (Retweet or Quote) and tweet us your region (EU/UK or NA.) Why do it like this? Well because that way, you’re sharing a review for the game that can be won, to your own Twitter audience But by also following us, you can see more contest details when they are posted and share them on, meaning the contest goes further for more to learn about it, as opposed to us just trying to get our followers up.

So yes, Week 1 of our I and Me download key giveaway has begun and will run until the end of this week, but even if you do not win today, or even this week, everyone who entered, remains entered in the draw, so even if you don’t win this week, you can actually win next week, or the week after that. As for why focusing the giveaway on Twitter? Well it’s a lot faster than doing it on Facebook and it’s more open, so it just makes sense, but as a treat, anyone who reads and comments on the bottom of this post, you too are entered, but you will need to comment your preferred region as we have 25 EU and 25 NA codes available and yes you can enter for a friend.

Should you wish you need more details, feel free to check out our I and Me Giveaway Announcement trailer here, or skip that and check out a couple of the tweets beneath it, as they pertain to the giveaway:

5 Weeks, 50 keys & So many Ways to Win! Our #IandMeGame giveaway begins. 25 EU & NA codes are up for grabs. Week 1's rules can be seen here: pic.twitter.com/pixpH97hdp

Our giveaway continues. Have you entered it yet? https://t.co/rrSnMHlYv6

Instead of putting all names in 1 pot, we're going to do 2 pots instead, with one for each region. If you enter, tweet us your region! pic.twitter.com/tXtdx2VZgo

Announcement: @Nintendo_SW & @NyanKitty8 are today's Winners. DM to claim your Prize. Everyone else who entered is now in tomorrow's draw. pic.twitter.com/nPNWq6WkTk

As for the review in question that needs to be shared, you can access it with this tweet right here:

We do hope you’ll join us in participating as this could be something of a repeat performance, but no promises. As for continued updates on the contest, i.e. rules for the next week of giveaways, that’s all going to be revealed on Twitter, so if you really want to stay up to date on everything related to our giveaway, @miketendo64 is the place to go!

Oh and we’re also doing a separate giveaway in Switch Player magazine, where 10 codes in total are available, so to learn how to be in the chance of winning one of those, you will need to check out the next issue that comes out this month.

Thank you for reading.