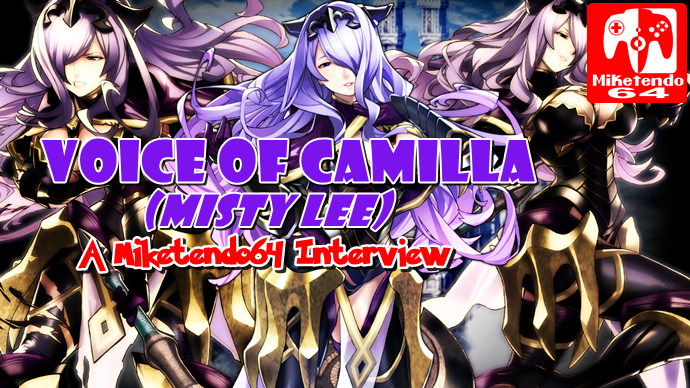 While the majority of our interviews sees us talking to various devs and publishers, every now and then we like to throw a curveball, like we did when we interviewed James Farr and this time around our curveball is Misty Lee! For those of you who do not recognise the name, shame on you for Misty Lee is the voice of Fire Emblem’s Camilla and Ursula and she’s also a talented magician as well, so because that’s enough to get us interested in knowing more, naturally we interviewed her and you can see the results right here!

In typical interview fashion. Would you mind introducing yourself to our readers?

Misty Lee: Hi there!  My name is Misty Lee.  I’m a voice actor and magician based out of Los Angeles, CA.

Miketendo64: As a voice actress, you have worked on a great number of projects from live action films, to animated movie and some of the most popular video games to date, so when picking a role, just what exactly is it you look for from your characters?

Misty Lee: As actors, the roles kind of pick us.   I do love playing salty broads, though.  Sassy, uber-competent badass chicks and over-the-top villainesses are always ‘oh HELL yes’ parts for me. *grin”

Blame it On Seitz!:

Miketendo64: And because I brought up games, what led you to doing voice work for Nintendo & Intelligent System’s Fire Emblem series in the first place?

Misty Lee: Patrick Seitz is to blame, because he suggested I audition.  I did, and just got lucky.

Miketendo64: Being as though you have voiced Camilla twice now, do you have any hopes of voicing her once again? Be it for another mobile title or even Fire Emblem Warriors?

Misty Lee: I love Camilla, and would love to be voice her again. Forever!

Miketendo64: Out of curiosity, have you yourself played Fire Emblem Fates and Heroes or any Fire Emblem game?

Misty Lee: I haven’t played FE yet and am afraid to start, because after voicing Lady Liadrin in Hearthstone, I started playing… and haven’t stopped.  FE seems so fun, I just KNOW I’ll get addicted.    It’s inevitable – I know it’ll suck me in eventually, but for now I’m trying HARD to stay away.  *grits teeth, struggles*  Must… avoid…the awesome…    *grin again*

Miketendo64: I feel exactly the same way about the Fire Emblem games!

Voice Acting vs The Life of a Magician:

Misty Lee: Voice acting is both easier and more difficult than magic. In magic, I have to coordinate staff, transport tons of stuff, generate stage plots/light cues/audio files, help with marketing AND perform – and that can be both time consuming and exhausting.   With voiceover, you show up with everything you need – your voice.  That’s convenient, but also rather daunting.  You don’t get props to hide behind, or makeup/costumes to help sell the character.  It’s you and the microphone – and if you’re swinging a sword, singing a song, or falling off a 50-ft cliff, landing on spikes, bleeding into your throat and dying after 2.5 seconds of trying to get up, you have to make that sound convincing.

Miketendo64: With a lengthy career like the one you have, what has your biggest highlight in the terms of everything you have done to date?

Misty Lee: Voiceover Highlights?  Playing Princess Leia and Red Sonja.  Both were ‘big deals’ to me personally, because I’ve loved both since I was very young.  There’s a character coming out in a game this Summer I’m pretty stoked about, too – she’s crass, she’s tough, and she’s got QUITE a mouth.  I love her!

Magic Highlights?  Lots of moments to mention, so how about something coming up?  I’ll be on Penn and Teller’s Fool Us this July!  Please be sure to watch for it!

Miketendo64: We most certainly will!

Misty Lee: Yes.  I love several of our tricks.  Am particularly fond of the straitjacket escape we filmed, because that was incredibly personal.  My favourite trick by someone else is Teller’s Shadows trick.  It’s magnificent.

Miketendo64: But since you are both a talented and a successful voice actress, do you have any tips and tricks you wouldn’t mind sharing to our readers who wish to walk in the same shoes as you do?

Misty Lee: Hey, thanks!  The best advice available has already been compiled by the brilliant Dee Bradley Baker:  www.Iwanttobeavoiceactor.com  He covers everything from behavior in a session to audition tips.  Go have a look!

A Message for the Fans and a Cliffhanger:

Miketendo64: Final question, is there anything you would like to say to your fans and when can we hope to hear your voice once more in yet another videogame/film?

Misty Lee: Oh man.  So many great things are coming out this year, and I can’t tell you ANYTIHNG about them because they aren’t released yet.   Keep your eyes peeled – we’ve got some exciting announcements to make!

We most certainly will keep our eyes peeled Misty. If you’re involved it’s bound to be good, so fingers crossed its Nintendo related some way as we’ll be more than happy to share the good news! And even if it’s not, we might just have to make an exception!