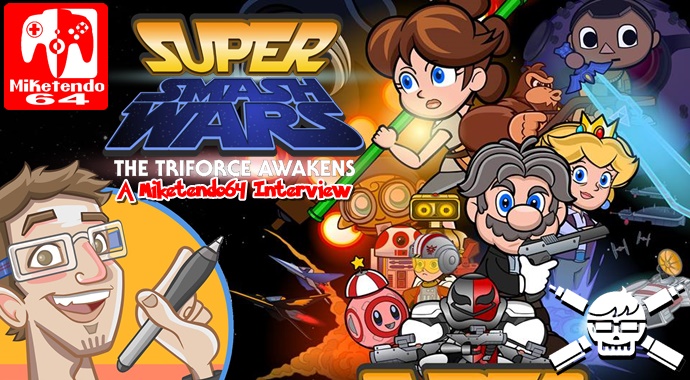 While the majority of our interviews sees us chatting with devs to learn more about their games, sometimes we like to interview animators, writers and passionate fans and given the fact that a few of us at Miketendo64 are fans of James Farr, of course we just had to interview him as well! Here’s how we got on:

Hi James, thank you for taking the time to do this. Would you mind starting things off by introducing yourself?

James Farr: Hi. I am James Farr, I’m an animator, a writer, animation director and the creator of Xombie.

Miketendo64: Since we’re doing this, let’s do it right and start things off by talking Xombie. Not just an animation, Xombie went on become something of a franchise what with getting, an illustrated novel, a DVD released in 2009 and a 6 issue long comic book series! How did it feel for you to see Xombie become something far more than what you first pictured it being, when you first conceived of it back in 1994?

James Farr: Producing the Xombie series was a wonderfully rewarding experience, and not only because it forced me to improve my art over the course of several years, but because the characters seemed to resonate with so many people. Because of the surprise success of the first online series, I was able to work on a number of other cool Xombie projects, like the comic book, the illustrated novel, and even an un-produced live action film over at Dreamworks. I never could have foreseen it having that sort of trajectory in the beginning, and was honored to work with some of my all-time heroes in the process. That experience, and others, are daily reminders to me to never stop drawing, or producing new things. If you build it, they will come.

Miketendo64: Since we’re doing this, let’s do it right and start things off by talking Xombie. Not just an animation, Xombie went on become something of a franchise what with getting, an illustrated novel, a DVD released in 2009 and a 6 issue long comic book series! How did it feel for you to see Xombie become something far more than what you first pictured it being, when you first conceived of it back in 1994?

James Farr: Despite an awesomely-run campaign, we unfortunately weren’t able to kickstart that story at the level I was hoping, so you might say that option decomposed rather quickly. Fortunately, however, I have re-acquired the rights, and can now continue the story myself – exclusively on my YouTube channel. For any Xombie fans out there, I sincerely hope it’s worth the wait. Xombie: Dead Ahead premieres March 1st, 2017 at youtube.com/jamesrfarr.

And a teaser just went up on the 20th of this month.  You can check it out right now over at the brand new xombieonline.com

Miketendo64: I think I’ll be heading over there myself in a minute!

Taking it to the Next Level:

Miketendo64: So with such an extensive portfolio and all that you have learned over the last couple of decades, what has been the hardest project you have ever worked on?

James Farr: Xombie: Dead Ahead – Premiering March 1st, 2017 on youtube.com/jamesrfarr. Haha. No lie, though. This one is next level challenging. But that’s exactly how it should be.

Miketendo64: You have collaborated quite a lot with Jacksepticye and he has his own series that you animated, what is it like to work with him?

James Farr: Jack is a great pal, and a wonderful human. Unfailingly great to work with, and just a fountain of positive energy. We need a hundred more just like him.

Miketendo64: When you first dived into the world of animation, was it something you always wanted to do or something you sort of fell into?

James Farr: When I was in college back in 98, Flash animation became the quickest and most impactful way to get my stories out in front of people, which enabled me to sell my first cartoon pitch at the age of 21. Since then, for better or worse, I guess I’ve been “in” animation. Although the goal was always to just tell a good story.

Miketendo64: From Xombie to Super Smash Wars: The Triforce Awakens, you have animated a great deal of projects over the years and each one different from the other greatly. How do you find adjusting to each project you take on?

James Farr: It can be a challenge sometimes to switch between multiple projects or tones within short production windows, but when possible, I try to set aside a few weeks (or even months) to exclusively focus on one or two things at a time.

James Farr: It’s nearly impossible for me to devote that sort of time and attention to a mashup project unless its capturing, or parodying, something I already love. As a lifelong Nintendo fan, the Mario-verse was an easy sell, and something about which I happen to know a LOT. Hey, DidYouKnowGaming! I’m lookin’ at you!

Miketendo64: When it comes to doing your Parodies, you must go through a lot of ideas, we have seen, Star Wars, Ghostbusters and Teenage mutant ninja turtles mash-ups, surely you have a lot more ideas you have mulled over on one or two occasions. What other mash-ups have you considered that never made the grade or maybe are still sitting on the back burner or currently in development hell?

James Farr: Another Trains-Formers has been a long time in development, but hasn’t been forgotten.  And I’ll also be doing the new Ghostbusters 2016. Aside from that, I have a list of over 200 funny concepts to choose from. I may do a clips show at some point, where I rapid-fire 9 or 10 mashups that didn’t warrant an entire short of their own.

No Time for Marvel:

Miketendo64: With the latest entry to the Captain America/Avengers films released, could we be seeing a Wiivengers Civil War Parody or would it be too challenging to maintain the storyline?

James Farr: I just haven’t had the time for another Marvel crossover. But I may still do one in the future. I mean Infinity War pretty much has to be the ultimate mashup possibly ever, right?

Miketendo64: Over 5 months ago The Triforce Awakens! Part 1 was uploaded onto YouTube. How long did you spend working on the animation it and how goes development on Part 2? (Currently over 1.3 million views.)

James Farr: The first part took about three months from start the finish, with a long pause near the end as I worked out music with Joshua Peterson. Part 2 is nearly 80% done, and features some stupid levels of epic I’m very proud of. It will absolutely be dropping before Episode 8 comes out. Keep an eye on my Twitter/jamesfarr.com for announcements.

Miketendo64: After watching Super Smash Wars: The Triforce Awakens! Part 1, which I thoroughly enjoyed, I couldn’t help but wonder who Kylo Ren is supposed to be. He looks like a Shy guy but we know his true identity is hidden, will we find out who he is in Part 2 or could you tell us right now for the interview? If not, we understand.

James Farr: Thank you! I would hate to spoil the fun of the surprise. But as with every other mashup casting decision, I can only hope it feels exactly right once you see it. It can’t just be a name pun. (Like having Captain Falcon be Han, for example) It can’t just be a similar look or design. (Like having Samus be Iron Man, for example) Each choice has to work out long term, and on multiple levels, for me to land on a solid 1 to 1 analog. Needless to say, since none of us have seen Episode 8 or 9, some of these decisions have been insanely tricky to navigate for Triforce Awakens. But by the end of Triforce Awakens Part 2, I hope everyone will be super psyched for more Shylo Ren.

Appreciating the Work of Others:

Miketendo64: Your works are pretty hard to beat and feature some amazing animation. Do you enjoy taking the time to watch animations from other creators, for example ArtistGamerGal or CharlesCBernando?

James Farr: They are both awesome! I also love the work of Steff Egan, Steve Stark, Egoraptor… I have a long list of favorites that I try to keep up with.

Miketendo64: Not just viewable on YouTube, your creations can also be found on Newgrounds, where they have over 4.5 million views. Prior to falling into the Top 6 highest rated animators on Newgrounds, you were among the Top 3. How does it feel to be so well received in the Newgrounds community?

James Farr: Newgrounds was always wonderful to me, and the community there is full of mad geniuses. They are a bright creative beacon and outlet for so many people. I’m honored to have been a part of their history in some way.

Miketendo64: Now, since we’ve asked you pretty much everything else, it’s time to get real and ask a hard hitting question. Are you a console, handheld or PC gamer?

James Farr: All three, actually. I write and animate on a PC (and occasionally trip and fall into Steam), frequently play co-op on the NES, SNES and Xbox ONE, and when my wife isn’t guarding it, playing Zelda on my (Gold Triforce) 3DS.

Miketendo64: Well since you’ve mentioned a few consoles, just how many do you currently own?

Miketendo64: And I thought a certain Mike Scorpio had an extensive collection, good for you!

A Few Words for Aspiring Animators:

Miketendo64: For anyone aspiring to become an animator, do you have any words of advice, what key programs are good for animating, etc?

James Farr: Be prepared to practice, and be capable of noticing both your strengths and your weaknesses as they change. Strive to reduce those weaknesses with each new frame, and above all, don’t let anyone tell you to stop. And that includes telling yourself. As for programs, I still use Adobe Flash. And Premiere Pro to do my final edits.

Miketendo64: And do you have anything to say to your growing fanbase?

James Farr: I love you all! And thank you for your kind words and patience. Everyone is welcome to come follow me on Twitter @jamesrfarr, or on Patreon @ patreon.com/jamesfarr. I am looking forwards to creating more cool stuff with you this year!

James, it was an absolute blast being able to chat with you, so thank you, but hurry up and finish Part 2 of The Triforce Awakens. I’m dying to see what happens next!