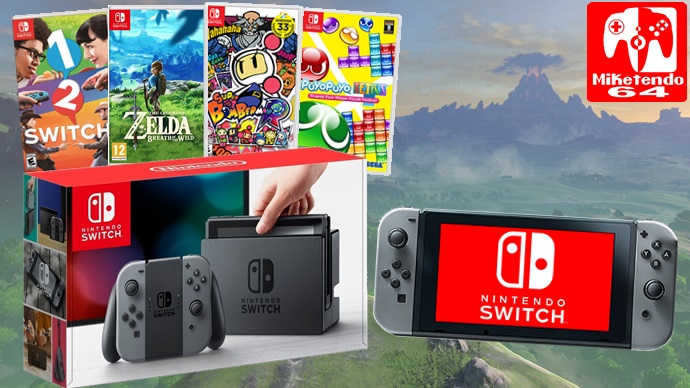 Following yesterday’s huge Nintendo reveals, Nintendo provided an update list of their games that have sold over 1 million units and despite Snipperclips, Super Bomberman R and 1-2-Switch all being exclusive launch titles for Switch, neither of them made it onto the list.

In fact the only Switch game that made it onto the list was in fact The Legend of Zelda: Breath of the Wild, which also made it onto the Wii U’s 1 million sellers list, but going by information provided by Nintendo today, it seems 1-2-Switch is on the cusp of making it onto the list and to give you a good idea of just what exactly I am talking about, here’s Tatsumi Kimishima’s full comments with regards to 1-2-Switch:

“1-2-Switch, which was also released at the same time as Nintendo Switch, is likewise on track to ship one million units very soon.

This title has become something of a hot topic due to the way it uses Nintendo Switch in some unconventional ways compared to other game systems. In particular, 1-2-Switch includes a mini-game that lets players use the Joy-Con as if they were milking a cow. The realistic sensation players feel thanks to the unique HD Rumble feature in every Joy-Con was noticed by a farm museum in the U.S., and we sent some Nintendo employees to go out and face their dairy farming challenge. This generated additional buzz through media coverage.”

As for Super Bomberman R and Snipperclips’ performance, in the month of March Super Bomberman R moved over 500,000 units and Snipperclips had a recorded number of 350,000 downloads, which is pretty impressive itself, but is nowhere nearly as impressive as the number of downloads & purchases The Legend of Zelda: Breath of the Wild had and since Kimishima had something to say about all of them, here is ever comment he made:

“Third-party publishers have also had a strong start for their software releases. Among these, Nintendo shipped over 500,000 units of Konami Digital Entertainment’s SUPER BOMBERMAN R in March; less than a month since the release of Nintendo Switch.”

Kimishima on Snipperclips – Cut it out, together!:

“The download-only title Snipperclips ‑ Cut it out, together! was developed over a short period by an indie developer. Its boisterous play style that gets people working together has been highly praised, and it has already been downloaded over 350 thousand times worldwide.”

Kimishima on The Legend of Zelda: Breath of the Wild:

“The Legend of Zelda: Breath of the Wild was released simultaneously with the Nintendo Switch launch, and has helped to drive system sales. It has gotten outstanding reviews not only from the consumers who purchased this title but also dedicated game magazines and all kinds of review sites.

Together with the Wii U version, sell-through topped three million units worldwide as of the end of March. By averaging our global sales numbers, we know that close to 90% of all consumers who purchased Nintendo Switch also purchased this title. Looking at these software sales trends together with Nintendo Switch system sales, we can see that sell-through will continue to grow. This high of an attach rate is more or less unprecedented, and we anticipate that this momentum may lead to a new sell-through record for the entire The Legend of Zelda series.

By listening to what players are saying and looking at the circumstances surrounding their actual play, we are finding that a growing number of consumers who do not usually play dedicated video game systems are purchasing Nintendo Switch to play this title or are taking an interest in doing so. By leveraging this opportunity, we sincerely hope to be able to reach consumers who have never played a game in The Legend of Zelda series before.

To put it simply, the four launch titles have done spectacularly well for the recently launched console and Nintendo believe their performance will only get better as each title secures even more sales, as more consoles make their way to the hands of their new owner and that is fantastic news.

But Nintendo are not putting all their eggs in these four baskets as they do have a great array of titles launching all throughout this year and among them is Mario Kart 8 Deluxe and it is out today and if you didn’t get it, there must be something wrong with you! But if you’d rather save the cash, ARMS is due out in June and Ultra Street Fighter II: The Final Challengers is out in May. Which fighter game takes your fancy? Let us know!