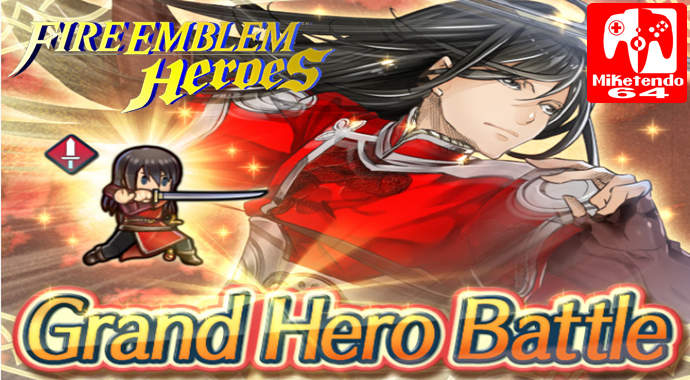 Ursula provided a challenge. Michalis was even tougher and now Navaree wishes to put them both to shame. Grand Hero Navarre has arrived!

As with every previous Grand Hero Battle, to do battle with Navarre, players will need to head over to Battle, then Special Maps and then choose the Navarre map before selecting the difficulty in which they’d like to challenge him on. (Options of course include Hard and Lunatic.)

But beating Navarre will be no easy task, as not only is it a difficult challenge on Hard mode, but should a single one of your units fall in battle, it’s game over, so if you’re an expecting easy battle, think again. But if you do have a powerful army and a decent strategy, then success shall be yours and victory on Hard mode you will of course earn you a 3★ Navarre, whereas a victory on the Lunatic difficulty will of course see you walking away with a 4★ Navarre.

However should your teams of Heroes let you down, than maybe it’s time to considering getting some new ones, and with a new Summing Focus Banner available, now might be the best time to do so. Especially since the likes of Caeda, Effie, Kagero and Sophia are carefully selected to ensure total victory, but you will need a lot of Orbs to get them. But should you require a quick lesson in why these characters are needed, then here is that lesson in photo format:

In typical Grand Hero Battle fashion, the event will only run for a short period of time, with this one set to end at 08:59 a.m. UTC+1 on the 9th of April and now in our typical Miketendo64 Grand Hero Battles coverage fashion, here’s a quick official regurgitation of the information with regards to Grand Hero Battles, to offer a full explanation to those who need it, followed by information on Navaree himself, which of course includes details on all his Skills that can be learned when he’s a 5★ Hero:

What are Grand Hero Battles?:

“These are special extremely challenging Hero Battles. By clearing the map you will gain the enemy Hero as your ally. As with other Hero Battles, if any of your allies fall in battle, it’s game over, so proceed with caution.

Grand Hero Battles also have a special rule: you cannot use a Light’s Blessing or an Orb to continue a battle if you lose, so make your moves on the field very carefully!

Look for golden banners to attempt Grand Hero Battles. Clear one on Hard to get a 3★ Navarre. Clear one on Lunatic to get a 4★ Navarre. Just make sure you’re fully prepared before you go into these battles!”

With all the knowledge you could possibly need, the time for you to go challenge Navarre has come. We wish you the best of luck, because you are absolutely going to need it!