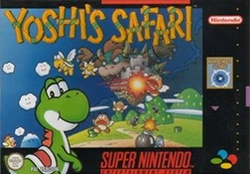 Welcome to The Weekly Wizard, the portion of Miketendo64 brought to you by the not-so-friendly neighborhood Spider-man behind Wizard Dojo, where I talk about Nintendo’s past, present or future. Or something along those lines.

Mario is not only the face of Nintendo, but the face of all gaming. There’s not another video game character who has retained such an iconic status for so long. As such, Mario has appeared in many, many video games through the years. But not every Mario game is a million-dollar best-seller, and some fall right into obscurity.

Who could ever forget Yoshi’s Safari? Well, most people, apparently. To this day, I have never met anyone outside of myself and my brother who has ever played this game. Most have never even heard of it.

Yoshi’s Safari was a rail shooter (yes, shooter) on the SNES, in which players controlled Mario in a first-person perspective (yes, first-person). Mario was riding on Yoshi, with players guiding a crosshair using the Superscope 6 peripheral, and basically just shot every enemy in sight. It wasn’t particularly violent, but I’m guessing the idea of Mario with a gun just wasn’t too appealing to most players, and the fact that you needed the Superscope in order to play it probably didn’t help things, either.

Then, of course, we have the Virtual Boy games: Mario Clash and Mario Tennis. Mario Tennis was decent enough, but lacked the fun gimmicks of later Mario Tennis titles to really make it feel like a Mario tennis game. Mario Clash was a bit more unique, resembling the original Mario Bros. arcade game, but played in a 3D perspective where you could travel between the foreground and background.

Of course, it didn’t matter how good these games may have been, the simple fact that they were on Virtual Boy all but sealed their fate of falling off the radar.

Then there are the dreaded “edutainment” Mario games, such as Mario is Missing (Luigi’s first starring role, a detail the green-clad plumber would likely wish to forget), Mario’s Time Machine, and Mario Teaches Typing. Suffice to say, there’s a very good reason these titles fell into obscurity. They were pretty bad, even by educational game standards (although Mario Teaches Typing was at least somewhat successful at teaching typing).

“Me, after playing the Mario edutainment games.”

Not all obscure Mario games were products of the 1990s, however. Even in 2002, we had Mario Party-E, a Gameboy Advance title that took advantage of the E-reader in an attempt to capture a more literal board game feeling. The E-reader wasn’t a big success, and if people wanted to play Mario Party, no doubt they’d stick to one of the versions that only requires extra controllers to play.

Then, of course, we have a number of Japanese-only games, like Mario & Wario or All-Night Nippon Super Mario Bros. It’s not just Mario who has been in such obscure titles, however, as other characters associated with Mario have also starred in some hidden gems.

Wario Blast (also known as Wario Blast: Featuring Bomberman) is an interesting case. In Japan, it was simply titled Bomberman GB, because that’s what it was, Bomberman on Gameboy. But when it made its way to the west, it became a crossover title with Wario, with Nintendo’s anti-Mario getting top-billing. From what I remember, it was a pretty solid Bomberman game, at least when one considers the limitations of the Gameboy. But no one ever seems to remember it.

Of course, where Wario is concerned, we also have Virtual Boy Wario Land. Like Mario Clash, it’s placement on the ill-fated Virtual Boy all but ensured it was a commercial failure, but it actually remains a beloved favorite to the few who actually owned a Virtual Boy. VBWL even ended up inspiring other game designers, such as Retro Studios when they were developing Donkey Kong Country Returns.

This is just the tip of the iceberg. There are many other obscure Mario games out there. Perhaps I’ll cover more of them in a later edition of TWW. For now, I hope maybe I could either inform or remind you of Mario’s more under-the-radar ventures. Not all of them deserve to be so buried (but the edutainment ones, they definitely deserve it).

That’s all for this edition of TWW. Have you ever played any of these games? Or even heard of them? Or are they not as obscure as I’ve been lead to think? Feel free to share any obscure Mario memories in the comments, and check out WizardDojo.com for more of my thoughts on video games, movies, and other such things.