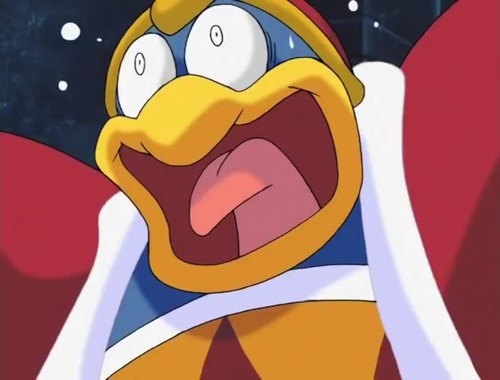 The Weekly Wizard: Issue #9: All Hail the King (Dedede, that is)

March 19, 2017 8:33 am Published by themancalledscott Leave your thoughts

Welcome to The Weekly Wizard, the segment of Miketendo64 brought to you by the nefarious cad responsible for Wizard Dojo, where I talk about the current goings-on with Nintendo, take a retrospective look back at their past, or just share some thoughts on the Big N. Whatever I feel like.

Yes, I know this edition of The Weekly Wizard is late. Things happen. Plans change.  there are unavoidable circumstances. What can I say? I know you all have been at a total loss without my ramblings and my gifs for a whole extra day, but hopefully this late edition of TWW will make up for lost time.

Anyway, let’s get to the point: King Dedede is one of Nintendo’s greatest characters, and quite possibly their most underrated. Kirby’s archrival may look a bit silly, resembling a blue penguin cosplaying as Santa Clause, but he is one of Nintendo’s perennial villains for a reason. He’s simply awesome!

For starters, the good king was arguably Nintendo’s first morally complex character. Video game villains rarely venture into gray territory, and things tend to be pretty black and white in regards to morality in games, but not so for King Dedede.

Though King Dedede is most famous for being Kirby’s enemy and something of a bully, he’s also a character who’s willing to put his ego aside and aide Kirby, should it be for the greater good of Dreamland. He was even the one who first sealed away the evil Nightmare into the Fountain of Dreams during the events of Kirby’s Adventure. Dedede is usually selfish and greedy, but when his kingdom is threatened, he’ll set aside his petty nature to fight the good fight.

Sure, some would say Bowser has done the same thing on occasion, but he didn’t do so until Super Mario RPG in 1996, a good few years after Dedede did it first. King Dedede may not be the most complex character in gaming, but considering he came from a time when video game villains were solely defined by being the final boss, Dedede’s relatively detailed morality was certainly ahead of its time.

Besides his relative complexity, King Dedede is just downright cool. Did I say he looked silly earlier because he looks like a blue penguin cosplaying as Santa Clause? What am I talking about? That makes him look awesome!

Plus, Dedede has a penchant for professional wrestling, at least if his frequent wrestling-themed boss arenas are any indication. He also wields a giant hammer, pilots robots, taught himself to fly simply because he was jealous that Kirby could do it, and uses his own minions as weapons.

We also can’t forget his theme music. That glorious, glorious theme music. First heard as the final boss theme in the very first Kirby game, Kirby’s Dreamland, King Dedede’s theme has remained intact for twenty-five years. While Bowser and Ganon may consistently have great music, it’s always different. Dedede, on the other hand, has the most consistent theme music of any character in all of gaming. It’s been remixed and remastered, but never replaced. And with good reason. It’s freaking awesome!

King Dedede is such a great video game character, that it’s a shame he’s only ever been a boss or a supporting role. In fact, with the exception of Bowser, he’s probably the Nintendo character in most need of a starring role who has yet to receive one. I think it’s about time King Dedede got his own game.

Just think about it, it wouldn’t exactly be out of place. The Kirby series is constantly trying new things, venturing into other genres, and tinkering with its established formula. So a game where you play as the usual villain just seems like a logical addition to the franchise.

I can just picture it. A game where instead of copying enemy abilities, you simply beat the snot out of them with a mallet, stomp them into the ground, and throw them at each other. It would probably be something of a beat-em-up combined with a platformer, which would be the perfect fit for the character. Or maybe they could go the RPG route, and capitalize on the character’s robust and comical personality to make for some hilarious RPG antics (I’ve always longed for a Kirby RPG of some kind, and a focus on Dedede might be what the series needs to make an easier transition into the genre).

Simply put, King Dedede is one of Nintendo’s greatest creations, and he doesn’t always get the credit he so rightfully deserves. His greed and selfishness mean he’s usually depicted as a villain, but he’s also brave enough to stand up to those who threaten his kingdom and his people. In a world filled with cute characters, Dedede is the kind of guy who’s more than willing to break out a mallet and sick wrestling maneuvers against those who wrong him. He’s as funny as he is curmudgeonly, and has a totally kickass theme song to boot.

It’s time more people start recognizing King Dedede’s greatness. And that includes Nintendo themselves. Dedede has played third-tier villain to Bowser and Ganon for far too long. It’s time Nintendo and Hal make him into the video game star he was always meant to be.

That’s all for this week’s edition of The Weekly Wizard. What did you think? Do you recognize Dedede’s perfection? Or have you bought into Kirby’s propaganda and need a good mallet-whacking? Feel free to let me know in the comments, and be sure to check back next week for more of my nonsense on The Weekly Wizard. For more writings from yours truly, including video game reviews and movie stuff, check out my website at WizardDojo.com!