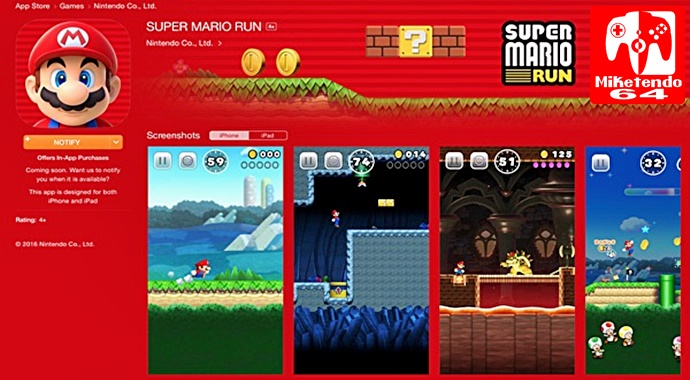 Nintendo has just revealed that Super Mario Run is finally going to be available from the Google Play Store from the 23rd of March onwards, and now they’ve given us even more incredible news!

Revealed via an in-game notification on the iOS version of Super Mario Run, a huge update is one its way that will add new characters and introduce Bowser Challenges, (one of which that will allow players to “unlock World 1-4 in the free version of the game.”) But wait, there’s more!

Additional content is also teased as the notification specifically states that the two mentioned additions above (new characters and Bowser Challenges), is not everything and we can expect to hear more about what this version 2.0.0 update brings with it, in the coming days/weeks.

Why days/weeks? Well no release date has been given for the update and while it would be nice to see the update roll out the day the app does for android devices (as that would make a lot of sense, which is something I have said before during an Let’s Talk About Podcast here at Miketendo64), there is of course a possibility it could come out a few days or even a week later, but fingers crossed that won’t be the case.

But what about the new content itself? Having previously a possible version 2.0.0 update during the same Let’s Talk About above, I made a case that Birdo would be a great character to add to the game, since Birdo and Yoshi can of course work in a similar fashion, but it seems we’ll be getting more than one character, so maybe Princess Daisy or even Rosalina could be joining the party. Whoever it is though, just don’t go expecting any new Worlds to be added, as Nintendo have specifically stated they won’t do that, but maybe, just maybe, we’ll get to see a huge wave of new items hit the store and the max number of Toads we can hold expanded.

Just as soon as additional news and information on Super Mario Run’s 2.0.0 update arrives, you can expect to read all about it, right here at Miketendo64.