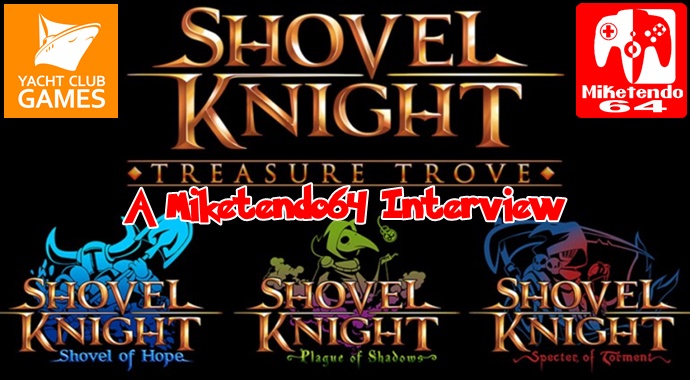 Added to the Switch launch line-up is of course Shovel Knight: Treasure Trove and the standalone first available on Switch, Specter of Torment campaign and Yacht Club Games couldn’t be any more excited, and neither can we, the fans. So in light of what is to come and the fact we’ve been eager to interview the ever popular Yacht Club Games, we actually got the chance to ask them a few very random questions and while the answers may have taken their time getting back to us, they were worth waiting for. Let’s dive right in shall we?

No Plans for Treasure Trove Retail just Yet:

Miketendo64: Will there be a retail release of Shovel Knight: Treasure Trove for Nintendo Switch?

Yacht Club Games: We don’t have anything to announce, but lots of people have been asking. I’d love to see Shovel Knight on that little Switch box! Stay tuned!

Additional amiibo Would be Nice, but Unlikely (For now):

Miketendo64: That Shovel Knight amiibo is looking awful lonely, are there any plans to do an amiibo of another Shovel Knight character now that the game and its titular hero, continue to rise in popularity?

Yacht Club Games: Man, wouldn’t that be so cool!? I would love a whole array of amiibo, maybe even like an Ornate Plate variant of the original amiibo. What would they do in the game? Sadly, we have nothing to announce at the moment. But never say never- stay tuned!

Four Years on, the Madness is Setting in!:

Miketendo64: Being so Shovel Knight is now an anthology you are still developing, long after the release of the initial game, what’s it like working an ever growing project, even if you are just trying to come through on your Kickstarter promises?

Sean Velasco: Yes, we are slowly going mad from working on Shovel Knight for so long. It’s been 4 years now, hee hee ho ha ha! But we also are having a great time building this big epic game, and we often have flashes of humor or inspiration that are still really fun to work on.

Miketendo64: Other than Yooka-Laylee, does Shovel Knight have any other cameos lined up for this year?

Sean Velasco: I’m sure he does, we have lots of fun seeing our little hero in other games, haha! But right now, we are the most excited for Shovel Knight in Yooka Laylee. “Yo ho yo ho yo ho!” Have you heard his voice? That’s me, haha!

We won’t be Seeing Yooka and Laylee Appearing in Shovel Knight any time Soon:

Miketendo64: Is there any chance of a Yooka-Laylee cameo in a Yacht Club Games work, i.e. a Shovel Knight campaign or another title you guys are involved with?

Yacht Club Games: That sounds really cool, but we don’t have anything to announce at the moment!

Miketendo64: Inti Creates have expressed an interest in doing an Azure Striker Gunvolt 3. Should the game become a reality, can we hope to see Yacht Club and Inti work together once more.

Yacht Club Games: Absolutely, we love Inti Creates and working with them has been awesome. I hope we can always support our indie brothers!

We won’t be Seeing Yooka and Laylee Appearing in Shovel Knight any time Soon:

Miketendo64: Last question, the Nintendo Switch. Are there any plans by staff members to pick up the new console?

Yacht Club Games: I think most of us have it pre-ordered! Some of us for excited for Zelda and some of us really want to fondle cows in 1-2 Switch! I’m waiting impatiently for Super Mario Odyssey, but for now I’ll play Specter of Torment, and bring cooperative 2 player Shovel Knight everywhere I go! Isn’t that the best!?

Given just how busy you guys are, we appreciate you guys being able to get round to answering our short list of questions. Best of luck with your Switch releases this week!