Meet Giovanni Gaul, The Boy With The “Super” Nintendo Room. 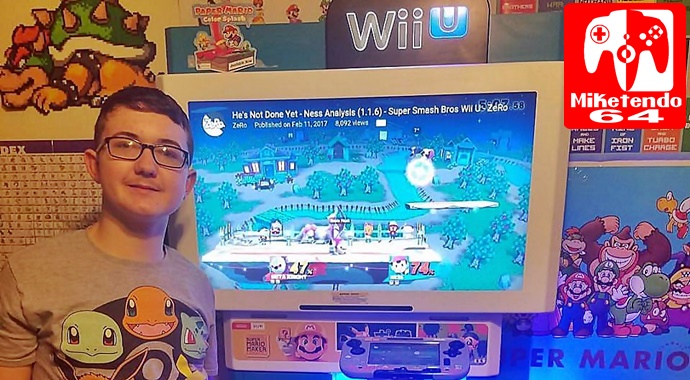 As you all well know, here at Miketendo64 we don’t just cover the latest news and updates from the Big N, we also like to honour the fans as well. Well today is no exception as we stumbled across one gamer in a Facebook group whose love for Nintendo has created one really awesome looking gamer den that puts my own to shame. We contacted the gamer in question to talk about his fantastic room and he got in touch almost immediately. Meet Giovanni Gaul, a 13 year old gamer whose passion for Nintendo was nurtured by his Mom and has grown into a true Nintendo Aficionado.

I am only 13 but my love for Nintendo has been lifelong. My mom grew up with playing the original NES as a kid. We still have her original system, all of her games and even her turbo controller. I got my very first GBA Pikachu edition when I was 3 and when I had surgery when I was 4, mom and dad bought me a Wii. My mom and I played Mario Kart every day. My mom joined Club Nintendo and I got a lot of really cool stuff like special posters and a commemorative pin collection that I have never opened to this day. I started collecting little figures and stuffed animals of Mario, Sonic and Pokemon too. I have a really cool old remote control Mario Kart and a big Japanese gold 30th Anniversary Mario statue.

A couple years ago my parents drove me to Nintendo World in New York City which was really cool. I got some cool stuff there and I even saved the special bags. When I was little I watched The Wizard all the time and dreamed of playing in a tournament. I started playing Super Smash Bros. I now play in local competitions at a place called The Laboratory. It’s a cool gaming lounge about an hour away. I don’t have a lot of friends to hang out with so a couple times a week I go to our Game Stop and talk to a couple guys that work there and will play the Smash Demo. Last Saturday, I sold my extra PS4 so that I could pay off my Switch preorder. My mom took me right to Game Stop after. When I got there I went to play the demo and the whole Wii U was gone! I asked what happened and they said that Nintendo came and took it out. I asked what they were doing with the stand and if I could buy it and he said that I could have it! It was the best day ever! It completes my Nintendo room.

We would just like to take the time thank Giovanni for getting in touch with us and participating in this feature article. We hope you will spend many more wonderful years filled with joy that can only come from the Big N.

Choose your Paldean Starter with the Next Splatfest for Splatoon 3

5 thoughts on “Meet Giovanni Gaul, The Boy With The “Super” Nintendo Room.”

Choose your Paldean Starter with the Next Splatfest for Splatoon 3