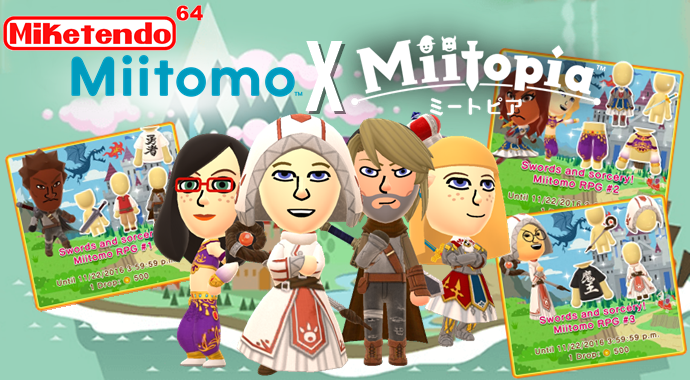 Is Nintendo Teasing Miitopia With Miitomo?

I am sure all of you Miitomo users have seen the latests series of clothing “Swords & Sorcery! Miitomo RPG” to be won in the Miitomo Drop Games. These costumes range from Warrior To Mage and are available in all sorts of colours like most costumes that are available to win or purchase in Miitomo. It does make me wonder if these costumes have been introduced to gauge players reactions and interests for Miitopia. Miitopia is currently only coming to Japan but it wouldn’t surprise me if Nintendo are using Miitomo to see if it would be beneficial to bring Miitopia to the west.For those that don’t know what Miitopia is, it is an RPG for the Nintendo 3DS thats make your Mii Character the Main Protaganist and is tasked with choosing a class (Warrior, Mage, etc) and taking down monsters. You can recruit other players and characters to join you on your quest. It also has some Tomodachi Life and Streetpass Quest elements to it which may be familiar to some 3DS users. Not much else is known about the game except that it launches in Japan December 8.

Until we get news of Miitopia coming to the rest of the world, I guess us Miitomo users will just have to settle with playing dress-up!