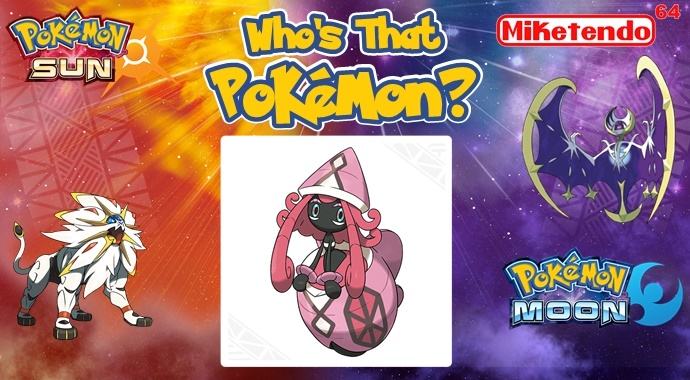 Welcome back to Who’s That Pokémon? the feature series regarding the Pokémon we can expect to see in the upcoming games. From Rowlet to Tapu Koko, and Drampa to Silvally, we have covered them all, but now we have another batch of eight Pokémon to cover, so get ready for another instalment of Who’s That Pokémon? We dedicate this edition to the Guardian of Akala Island, Tapu Lele!

Description: “There is a legend which says that long ago Tapu Lele once brought an end to war between the islands of Alola by scattering its scales and soothing the tired warriors.

Tapu Lele scatters glowing scales that physically affect others—providing stimulation to their bodies and healing their illnesses or injuries. But these scales can be dangerous as well, because a body can’t withstand the changes brought about by contact with too many scales at the same time. It will scatter its scales over humans and Pokémon for its own enjoyment; while it is innocent in one sense, there is also cruelty in the way it casually brings others to ruin.

If Tapu Lele doesn’t have much energy stored in its shell, it may lack the strength to seize victory in a head-on battle. With this in mind, it tends to prioritize not losing a battle over actually beating a foe, and it’s skilled at strategies such as inflicting status conditions on opponents.

Nature’s Madness slams a target with all of nature’s rage, reducing the target’s HP by half. Psychic Terrain is a move that no Pokémon was previously able to learn, and using it will boost the power of any Psychic-type moves used by Pokémon on the ground and prevent them from being hit by priority moves.

Tapu Lele’s Ability is Psychic Surge, an Ability that no Pokémon has previously had. With Psychic Surge, the field will be turned into Psychic Terrain when Tapu Lele appears in battle, boosting the power of any Psychic-type moves used by Pokémon on the ground and preventing them from being hit by priority moves.”