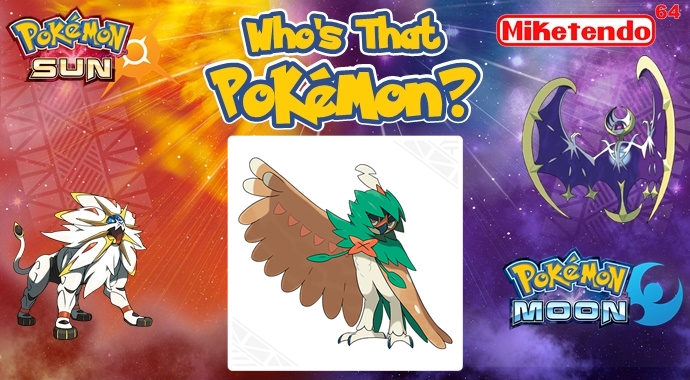 Welcome back to Who’s That Pokémon? the feature series regarding the Pokémon we can expect to see in the upcoming games. From Rowlet to Tapu Koko, and Drampa to Silvally, we have covered them all, but now we have another batch of eight Pokémon to cover, so get ready for another instalment of Who’s That Pokémon? We dedicate this edition to Dartrix’s evolved form, Decidueye!

Description: “This Pokémon is able to move about while completely masking its presence from others. Once an opponent has lost sight of it, Decidueye seizes the chance to attack it unawares. In a tenth of a second, Decidueye plucks an arrow quill from within its wing and sends its hurtling toward its target. Its speed is astonishing, but not more so than its precise aim, which enables the arrow quill to pierce a target through and through from half a mile or more away! Decidueye usually acts very cool, but it can become terribly flustered in unexpected situations like a surprise attack.

A skilled Decidueye can boast acrobatic curved shots. It seems some are also able to shoot arrows that reach up through the sky, only to come drilling down from above, piercing multiple targets one after another.

Spirit Shackle is a Ghost-type physical move that only Decidueye can learn. An opponent hit with this move will become unable to flee from battle or switch out for an ally.”