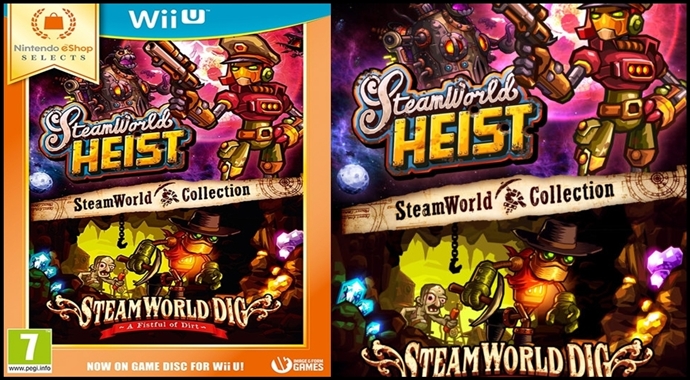 SteamWorld Everything! (Collection, NX Support, amiibo & a New Episode of the Engine Room)

In fact there’s quite a bit to cover, especially since Brjánn Sigurgeirsson (CEO of Image & Form) and Community Manager Julius Guldbog, were kind enough to give us a whole bunch of details in their latest Engine Room episode. There was no mention of how much the game will cost, as that mention will be revealed in the next Engine Room episode, but it does sound like the game will be releasing late September/early October. There’s even talk of dlc, hats and Julius and Brjánn requesting a new slogan. To see all of that and more, here’s the full video:

But that’s not all, because we haven’t even touched on NX support and amiibo yet, until now. Both Brjánn Sigurgeirsson and SteamWorld Collection is at Gamescom this week and MyGamingBoulevard managed to grab 10 minutes with Brjánn to talk about all things SteamWorld. From SteamWorld Tower Defence to changing SteamWorld Heist, Brjánn covers how the game evolved, talks about SteamWorld Collection and explains just how amiibo works.

Although this bit is going to be covered in the full interview video you can find beneath this paragraph, here’s amiibo in a nutshell. Nintendo don’t make them, so if a company wants to do their own amiibo, they have to licence an amiibo brand from Nintendo, and then on every amiibo sold, Nintendo get a cut, but it’s not that simple. Production of amiibos is not cheap, you can’t just pay to produce 5,000, but over 100,000, so that’s why there aren’t more indie game amiibos on the market. Now as for the NX, by the sounds of things, Brjánn is certainly committed to doing more SteamWorld games, right now not even he has an idea what exactly the NX is, but given the Nintendo devices Image & Form have done games for, it would be odd for them not to do a game for the NX. And now that you’re all clued up with our highlights, here’s the interview:

This is by no means the last we have heard of Image & Form, but for now at least, this has been all the recent news regarding all things SteamWorld related.