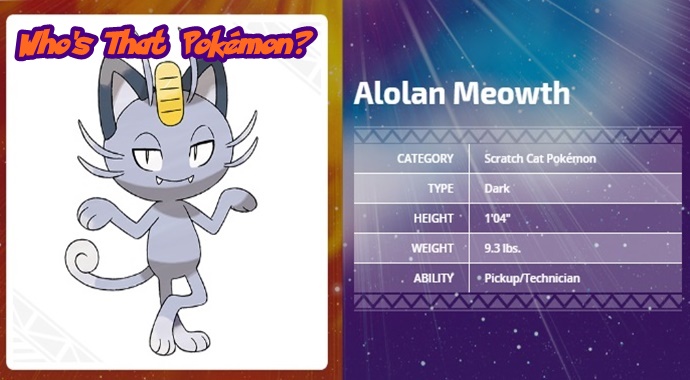 Welcome back to “Who’s That Pokémon?” the feature series regarding the Pokémon we can expect to see in the upcoming games. From Rowlet to Magearna, and Tapu Koko to Mudbray, we have covered them all, but now that even more Pokémon have been revealed this month, its time they got their own instalment of Who’s That Pokémon? So join us as we do a post all about Alolan Meowth!

Description: “Meowth is a Pokémon that did not originally live in the Alola region. They were sent to the royal line as an offering from another region, and only a select few could have them as partners.

The Meowth in Alola are distinct for their cunning and their great pride. Two things they really hate—a wound to their pride and dirt on their coins. If either one happens, they fly into hysterics!

It’s said that the Meowth that were offered to the royal family lived a life of luxury and pampering, which led them to have a selfish and prideful attitude. This caused Meowth’s form to change.

The once-rare Alolan Meowth became feral when the monarchy was destroyed, and they have now become regular Pokémon, seen as commonly in the Alola region as elsewhere.”