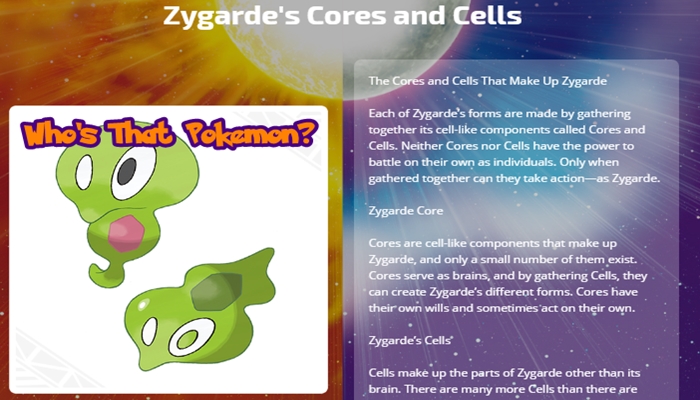 For every day that passes, is another day we move closer to the release of Sun and Moon and the closer we get, the more Pokémon we get to learn about. This is “Who’s That Pokémon?” A series of posts regarding the Pokémon we can expect to see in the upcoming games. From Rowlet to Magearna, we’ve covered them all, but now with the latest batch revealed, it’s time for some more additions of Who’s That Pokémon? and in this particular post, it’s all about Zygarde’s Cores and Cells! (Yes, even Zygarde’s Cores and Cells are getting one of these.)

Description: “The Cores and Cells That Make Up Zygarde: Each of Zygarde’s forms are made by gathering together its cell-like components called Cores and Cells. Neither Cores nor Cells have the power to battle on their own as individuals. Only when gathered together can they take action—as Zygarde.

Zygarde Core: Cores are cell-like components that make up Zygarde, and only a small number of them exist. Cores serve as brains, and by gathering Cells, they can create Zygarde’s different forms. Cores have their own wills and sometimes act on their own.

Zygarde’s Cells: Cells make up the parts of Zygarde other than its brain. There are many more Cells than there are Cores, and they exist all around the Alola region. Cells do not possess wills of their own. They act in accordance with the orders of a Core.”