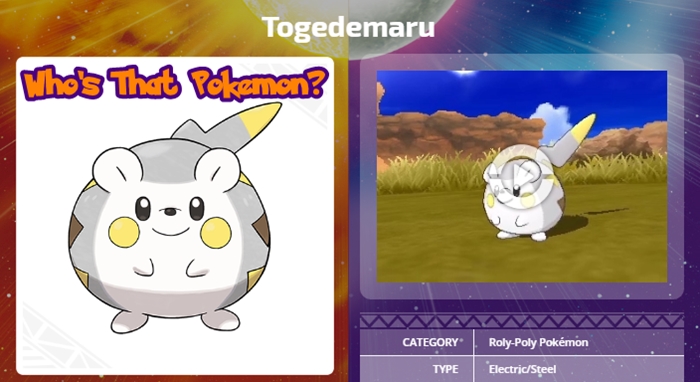 For every day that passes, is another day we move closer to the release of Sun and Moon and the closer we get, the more Pokémon we get to learn about. This is “Who’s That Pokémon?” A series of posts regarding the Pokémon we can expect to see in the upcoming games. From Rowlet to Magearna, we’ve covered them all, but now with the latest batch revealed, it’s time for some more additions of Who’s That Pokémon? and in this particular post, it’s all about Togedemaru!

Description: “Togedemaru is the Roly-Poly Pokémon that gathers electricity and stores it. The long needle that grows from the back of its head works as a lightning rod to attract electricity. With this reservoir of electrical energy, Togedemaru is able to release powerful Electric-type attacks!

Covering its body is a pattern of fur with strands like needles. That means that Togedamaru can roll itself up, and presto—it’s a ball of prickles!

Some skilled Trainers have developed the strategy of getting other Pokémon to unleash Electric-type attacks on Togedemaru, which absorbs their power to use in a response attack!

On days when lightning strikes, you can sometimes see Togedemaru gather and bristle up their needles, waiting to be struck by lightning.”