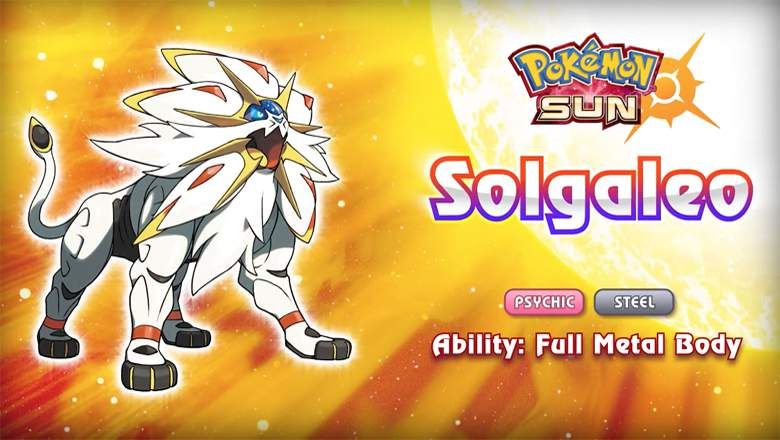 Talking ‘Bout The Next Generation: Gen VII – Solgaleo (The Pokémon Of Sun & Moon)

Hello and welcome back to “Talking ‘Bout The Next Generation,” the spin-off feature series of Talking ‘Bout My Generation, (the 6 part series we ran during #PokemonWeek.) Just like in the last series, we will be talking about, yep you guessed it Pokémon! Except this time instead of talking about one particular Pokémon per generation, in this series we’re talking about the many Pokémon of Sun & Moon. So to kick off the third instalment, let’s talk about Solgaleo!

I know this instalment has been a long time coming and the fault is entirely my own, as I have been too busy covering all of my other features and reporting the news to even think about the next instalment in this series, so today I have made the time to get this done and decide on which Pokémon I’ll be covering next time. But yes, today is all about Solgaleo and how I feel about him and honestly, I’m conflicted.

Sure he’s a lion and he’s big, powerful, an emissary to the sun, but he’s a Legendary based on the sun that is weak to Fire? What is with that? Still Lunala isn’t perfect either as she’s weak to Dark. (Yes, I see Solgaleo as male and Lunala as female, and I am not the only one.) Both of these Legendary Pokémon do look pretty cool, but they look too much like other Pokémon, what with Solgaleo looking like the ultimate Pyroar. Still he is pretty intimating.

Majestic, powerful and fearsome, I can see why so many prefer him to Lunala but me personally, I’m #TeamMoon and Pokémon Moon is the game I will be getting this November, so although I do like Solgaleo and would love to use him in action myself, my path does not rest with him, so those who are on #TeamSun, you’ll have to tell me what he’s like when you finally get the game. Although if I’m honest, considering as how Solgaleo is referred to as “the beast that devours the sun,” I might just end up getting Pokémon Sun well, or trading some of my more special Pokémon for it.

But, and as far as Solgaleo goes this is a big but, is Solgaleo really worth buying Sun for since we could choose Litten as our starter in either version? Don’t get me wrong, sweet Legendary or not, but Litten is most likely going to become a Tiger or a Panther, (a big cat) and Solgaleo is a lion (another big cat.) If these too were to fight, it would be the ultimate big cat showdown, but Litten is most likely to win, what with having tyoe advantage, so given as how Litten could stand to go on to become the better cat of the two, is Solgaleo actually worth getting? Or are you better off going with Pokémon Moon and getting Lunala? For me, the answer is easy, but what about you?

We have reached the end of today’s edition of Talking ‘Bout The Next Generation, and like I said above, I have already decided on who the next Pokémon we cover will be, but instead of sharing it with you, I’m going to leave it unsaid, so the only way to find out is to check back. Now given as how you had to sit there listening what I had to say about the Legendary, feel free to return the favour by commenting as much or as little as you want about Solgaleo.