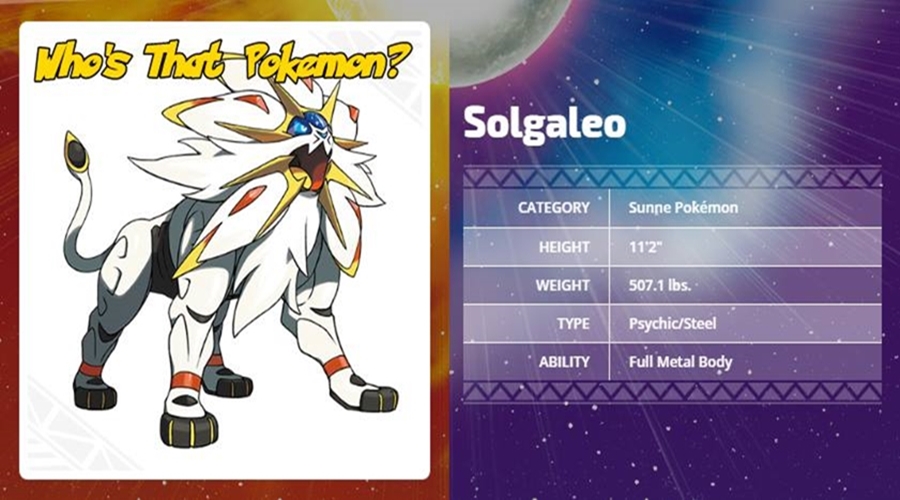 The newest trailer and news is out now, so with official details on the Sun & Moon Legendary Pokémon now out, it’s time for the next instalments in our running “Who’s That Pokémon?” series, so first up, it’s Solgaleo!

In a Location that has yet to be announced, but somewhere in in the Alola Region and when playing a copy of Pokémon Sun.

Description: “Since ancient times, Solgaleo has been honoured as an emissary of the sun. It is referred to with reverence as “the beast that devours the sun.” Solgaleo’s body holds a vast amount of energy, and it shines with light when it’s active. It has a flowing mane with a remarkable resemblance to the sun. Its signature move is Sunsteel Strike, an attack that charges at an opponent with the force of a meteor, disregarding the target’s Ability. Solgaleo’s Ability is Full Metal Body, a new Ability that no previous Pokémon has had. With the Full Metal Body Ability, a Pokémon’s stats will not be lowered by the effects of an opponent’s moves or Ability.”

As of now, that is all the information we have on the Legendary, but as soon as we have more, we will be sure to post about it as soon as we get it and with CoroCoro’s big reveal just around the corner, we might get the huge Legendary reveal then!

One thought on “Who’s That Pokémon? It’s Solgaleo!”