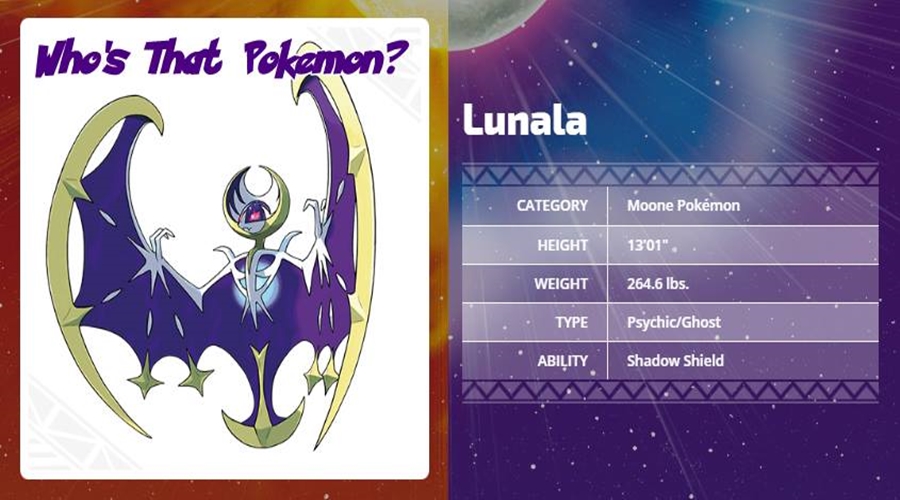 The newest trailer and news is out now, so with official details on the Sun & Moon Legendary Pokémon now out, it’s time for the next instalments in our running “Who’s That Pokémon?” series, so having done Solgaleo already, it’s Lunala’a turn!

Specific location that has yet to be announced, but somewhere in in the Alola Region and when playing a copy of Pokémon Moon.

Description: “Since ancient times, Lunala has been honoured as an emissary of the moon. It is referred to with reverence as “the beast that calls the moon.” Lunala is constantly absorbing light and converting it into energy. With its wings spread to absorb the surrounding light and glittering like a crescent moon, it resembles a beautiful night sky. Lunala’s signature Moongeist Beam attack releases an ominous beam of light that disregards the target’s Ability. Lunala’s Ability is Shadow Shield, a new Ability that no previous Pokémon has had. With the Shadow Shield Ability, a Pokémon will take less damage from an attack that lands when the Pokémon has full HP.”

As of now, that is all the information we have on the Legendary, but as soon as we have more, we will be sure to post about it as soon as we get it and with CoroCoro’s big reveal just around the corner, we might get the huge Legendary reveal then!