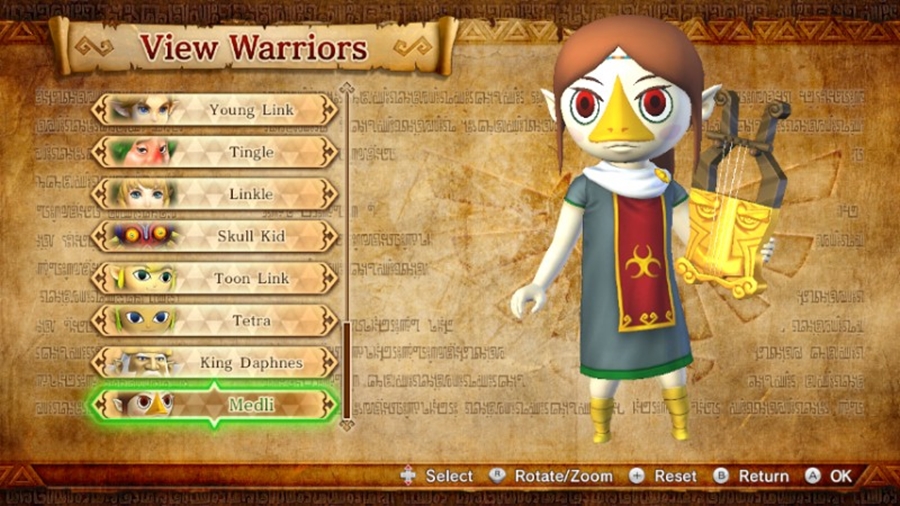 Medli and the Master Wind Waker dlc Pack are now out for both Europe and Japan, but already there has been some confusion as to how to get the update for both devices and the dlc. Well don’t worry we’ve already been through the process and we’re on hand to explain it.

For those of you who own and play the Wii U version, all you need to do to get the new update is to turn on your console and be told the software needs updating (unless of course it has done it already without even asking you first.) You then load up the game, see the update notes and can then go into any mode you want (Legend, Free or Adventure) and select a level of your choosing so that you will be taken to the Warrior screen and you’ll find her just beneath King Daphnes. (Or you could just go into Gallery, click View Warriors and scroll all the way down for it is at the bottom you will see her.) So pretty much, you can play her from the get go.

Getting her for the 3DS however is something else altogether because instead of being promoted to update your software when you access the game, you will have to go to the eShop first, search for Hyrule Warriors Legends if you don’t see it straight away when you first access the eShop. You will then want to download update version 1.3.0 then once you’ve done that, you’ll want to access the game. Once loaded up you’ll be graced with update notes and then the message we’ve been waiting for, “Received Medli.”

As for those who also purchased the Master Wind Waker Pack, you’ll need to head into “Extras,” select Redownload and download the additional content it found. At least that is what I had to do before closing the software and starting the game up again and finally received the “Received new Adventure Mode” message and unlike the other Adventure Mode maps, which can only be accessed after beating the one before it, Master Wind Waker Map is available from the get-go and it comes with its own rules, very similar to those of Master Quest Map but then couldn’t find it.

For anyone looking to do some Medli training, A1 (extreme bottom left,) is a level I have found to be great for training up characters and after one try on the Wii U version of the game, I was able to get her to Lv.25 but given as how Nintendo were so nice to give us some free rupees earlier via SpotPass, I just used the entire lot to get her up there. Unlike the Wii U version though, if you’re looking to get Medli’s better weapons, you’ll have to take on the new map and hunt it down! She is however something of a beast and a character most gamers will soon grow to love.

If however you never brought the Season Pass for Legends, the Master Wind Waker Pack can now be brought on its own, which is done in-game.

We hope you have a very pleasant experience with this character as she does bring something new to the battlefield and don’t forget to make the most of her while she’s here because the next character for both versions of the game, (Marin, who is part of the Link’s Awakening Pack,) won’t be out until the Summer, but as soon as any new details come out, we’ll be sure to share.


Categorised in: 3DS, The Legend Of Zelda, Wii U