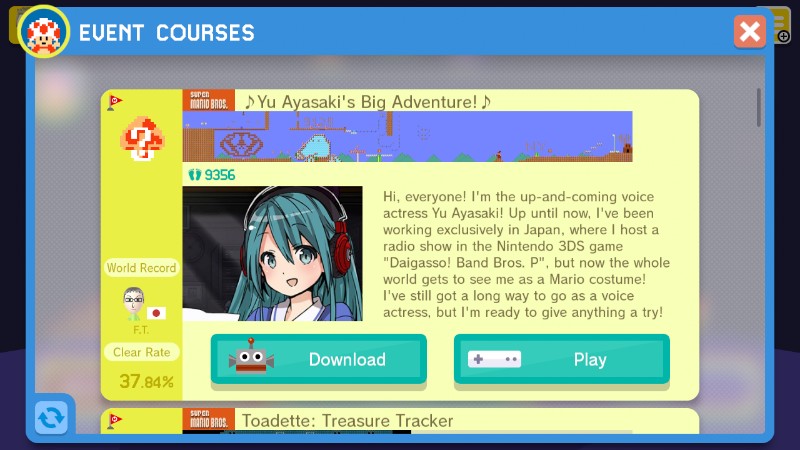 The Big Adventure is Here!

The time has come to add mystery costume #130 to your collection and complete another row as Yu Ayakaki’s event course is out and ready to be played!

This voice actress from Daigasso! Band Bros. P is dying for her big break so now she’s eager to show the world what she can do and is thankful to Super Mario Maker for giving her this chance. She may not be a costume that we need, or even want, but we’ll collect her all the same. To check out her character trailer and course description, you can find both below:

Hi, everyone! I’m the up-and-coming voice actress Yu Ayasaki! Up until now, I’ve been working exclusively in Japan, where I host a radio show in the Nintendo 3DS game “Daigasso! Band Bros. P,” but now the whole world gets to see me as a Mario costume! I’ve still got a long way to go as a voice actress, but I’m ready to give anything a try!

If you haven’t yet, you can unlock her now. Her course is rather simple in design compared to those we’ve seen recently, utilizes the new tools and easy enough to pass first time, even if you make plenty of mistakes, so the only thing that can stop you from getting her, is yourself.

But with the likes of her out now and the “minor celebrities” that became available after the version 1.40 update, maybe now we can move on to bigger and better characters like Ryu. (A guy can dream right?) Be sure to let us know who you would like to see get the Super Mario Maker costume treatment, in the comments below!