Time to Rock Out with the Bat Out 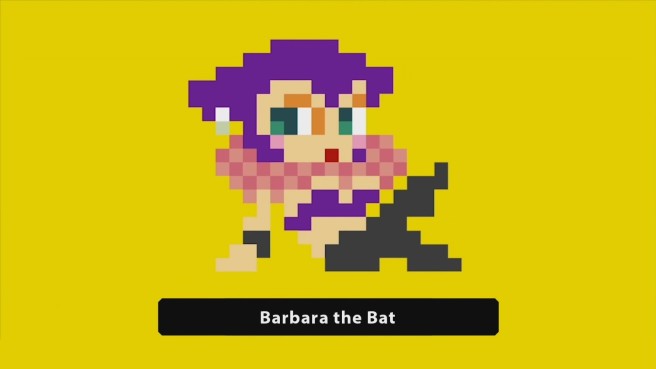 Wait no longer Bat fans, Barbara’s rock show of an event course has landed and its time she got to join the ranks of Professor E. Gadd, Bulbasaur, Charamander, Squirtle and Chitoge Kirisaki, as she claims the #126 spot.

She has been the victim of a bit of hate lately as a number of Super Mario Maker gamers are speaking out more and more about their hate of constant influx of characters they’ve never even heard of, when they would much rather a general update to add something more substantial to the game, but baby she don’t care.

Barbara the Bat is here now and her going away is not an option and although some might consider her costume not worth the hassle of completing the latest event course, they might have a fair point, but like that was going to stop me from going after her and go after her I did. If you, like me are interested in playing Barbara’s level, you can catch both her level description and character trailer, below:

Hello, my dears! I’m Barbara the Bat. …What are those blank looks for? Don’t you know who I am? I’ll have you know I’m the star of a little series called Jam with the Band. It’s very big in Japan, you know! You should all be thankful for this precious opportunity to join the ranks of my minions.

Do have to say though, the star of Jam with the Band (Diagasso! Band Brothers), she does come across as a bit full of herself going by the description alone, still you’ve got to admire the wording used, how it speaks to the majority who don’t recognise her, although as far as descriptions we’ve seen before go, it could have done with a little more work on it. But that’s just my two cents worth, be sure to let us know what you thought of the course and Barbara’s way of presenting it to us and don’t forget you can always check back for more Super Mario Maker news.