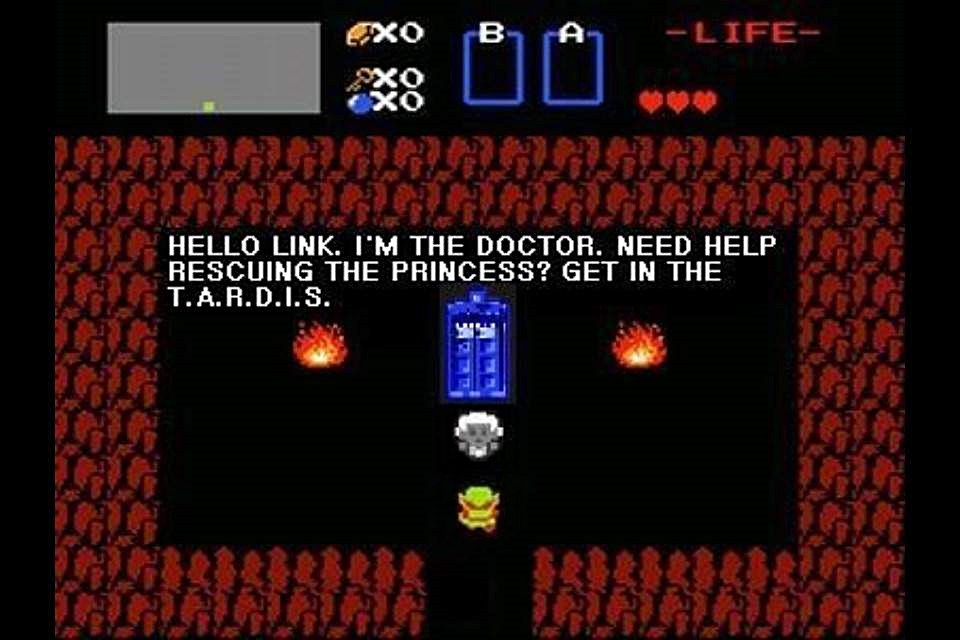 We’ve all seen it, the beautifully done, crossover picture of Link, face to face with the Tardis. A picture of two of the most iconic series’ of both this and the previous century and if you think about it, maybe a Tardis appearing in Hyrule isn’t too far-fetched because just maybe that Hylian boy we all know as Link is actually a Time Lord, if not Doctor Who himself.

Obviously he isn’t, but as far as both Zelda and Doctor Who are concerned, anything goes, but there are a lot of playful indications that such a fact is possible. For starters there have been multiple incarnations of both, such as a Link present whenever the lands of Hyrule, Termina and the rest, find themselves face to face with complete destruction. The odds of the heart of the Hero, being reborn at a time of crisis is just as likely as a single Link regenerating and hoping into a Tardis, flying to the location and era of his next adventure.

Both Doctor Who and Link, love adventures, forever solving puzzles, rushing head first into danger, saving all those they could along the way and risking everything in a deadly head to head with those responsible for the present wake of destruction. Both have more than one heart, mind you the Doctor only has 3, Link often starts off with 3 and can have up to 20 depending on the game (greedy bugger, you can tell he doesn’t have a mother, he never learned to share.). Then there’s the fact that every incarnation of Link is different to those before him, with their own unique qualities, alongside the same key components that make Link, well Link, such as honesty, courage and a guiding set of morals, oh and that playful nature that loves to break pots.

And let’s not forget that magical pouch of his that quite literally allows him to carry all manner of equipment, such as potion bottles, multiple bombs and other weapons. Not once have I ever noticed a cart being pulled by Epona, following closing behind him on all his travels, which possesses his entire equipment secured in one place and nor is there a slim, spindly secondary character, with a bag over his shoulder carrying it all. So clearly there is some magic at work, such as Time Lord technology hard at work, enabling everything to fit into his pockets rather nicely.

Plus they both have a history that heavily involves music, such as second Doctor Who incarnation, who just loved to play a nice little ditty on his recorder, whereas Link has been known to jam it out on a flute, an ocarina, windpipes (all involve blowing, but that’s a joke for another day) and let’s not forget guitar and drums, among others. Both also have an arch nemesis who keeps on coming back, no matter how many times they’ve been defeated and destroyed, the Doctor has the Master and Link he has the Gerudo (Ganondorf). But the biggest things they have in common besides companions and often discovering known & unknown worlds & realms, but time traveling itself.

Time and time again Link has found himself going both backwards and forwards in time, (Ocarina of Time, Majora’s Mask, Wind Waker and Skyward Sword, and Hyrule Warriors to name a few.) How can we be so sure it was pulling the Master Sword out of its pedestal that did it? Or playing a tune on the ocarina or stepping into a portal? He very easily could be darting off screen and jumping into a blue box and timey whimey zooming off to his next chosen destination.

Still playful fantasy aside, until there comes a day the daleks make a cameo or its revealed the Master sword doubles as a sonic screwdriver, I doubt Link is of Gallifrey origins, but he definitely is a type of Time Lord, a Legendary one at that, what with all of his previous adventures and the ones still to come. I’ll be highly disappointed if Link doesn’t even go back five seconds in Zelda U, or cross into another dimension at least, not.

Till Next Time folks and remember, stay gameful and watch out for those Weeping Angels.