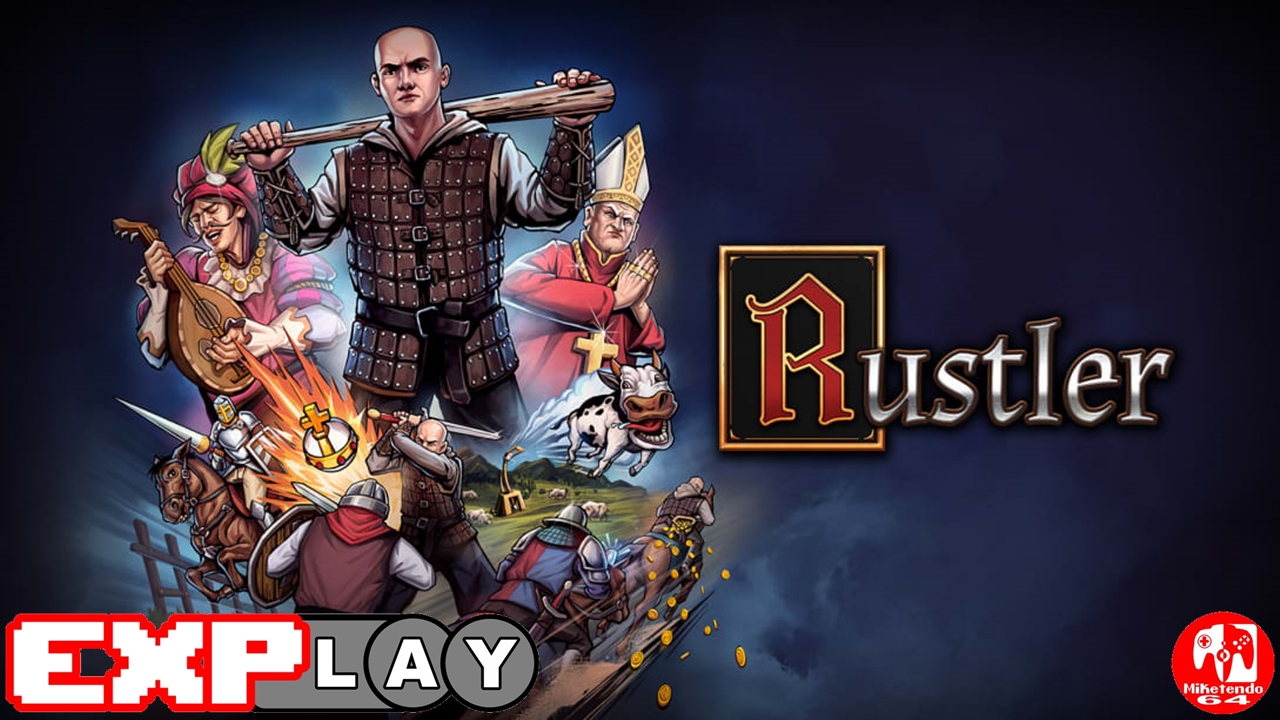 Welcome to EXPlay, (Explain & Play) the review series where we care not for scores but tell it how it is when it comes to every game we get our hands on, whilst also taking the time to include some lengthy gameplay, to give you the reader, the chance to shape your own impressions and views whilst watching and reading. In this installment, we’re covering Rustler by developer Jutsu Games.

Rustler is one of those games that wears its inspiration on its sleeve. It’s evident from many aspects of the gameplay, world, and characters that Rustler borrows heavily from Grand Theft Auto. Instead of a modern world in a big city, you play as Guy, during the medieval renaissance. With your friend, named Buddy, the two of you are on the run from local authorities as you enter into The Great Tournament to win the hand of the princess.

Along the way, you will need to gallop your horse past guards or ride through the local paint shop to hide from them. The gameplay includes side quests that require helping local citizens with jobs they may give you. Early in the game, I had to transport some dead bodies for a local grave keeper, dress as the grim reaper to scare people, beat down the town bullies, and more.

From time to time you may need to fight others in hand-to-hand combat, or use weapons you may find within the game world, or buy from shops. You can also purchase weapons at local shops. By completing the quests given to you, you can gain skill points that can be allocated towards various skills to better your chance at survival. These skills can aid you in slowing enemies down if you throw poop at them, allow for picking up items while on horseback, stamina boost, and more. For a small fee, from the money you are awarded by completing quests, you can change your skill point allocation to better match your needs or play style.

The world is lush and filled with mountain areas, forests, rivers and ponds, and more. Cities you come across are vibrant and full of buildings and details. Rustler is played from a top-down view similar to the original Grand Theft Auto games and Chinatown Wars on DS. The game carries an M (17+) rating, and rightfully so, as the in-game dialogue is a bit crass and there are many adult themes. If you enjoyed the GTA games you will be right at home here.

The style of Rustler’s world is unique in that it crosses the medieval world with modern themes. You will see graffiti on buildings, characters use modern slang, and there are riffs and homage of video games, film, and tv shows throughout. I felt the camera angle was somewhat disjointed from time to time and sometimes I found myself battling the controls. Thankfully the game implements a colored arrow to show you which direction you should go, which is helpful when finding quest markers.

Overall Rustler is a decent ‘clone’ of the Grand Theft Auto gameplay mechanics and features a colorful cast of characters. There are some janky controls while riding your horse and during the fighting but it’s not terrible. The humor may wear thin as most of it’s borderline juvenile but it has its funny moments. Rustler will bring back a lot of nostalgia for the GTA Chinatown Wars and other games in the genre ripe for Switch re-releases.