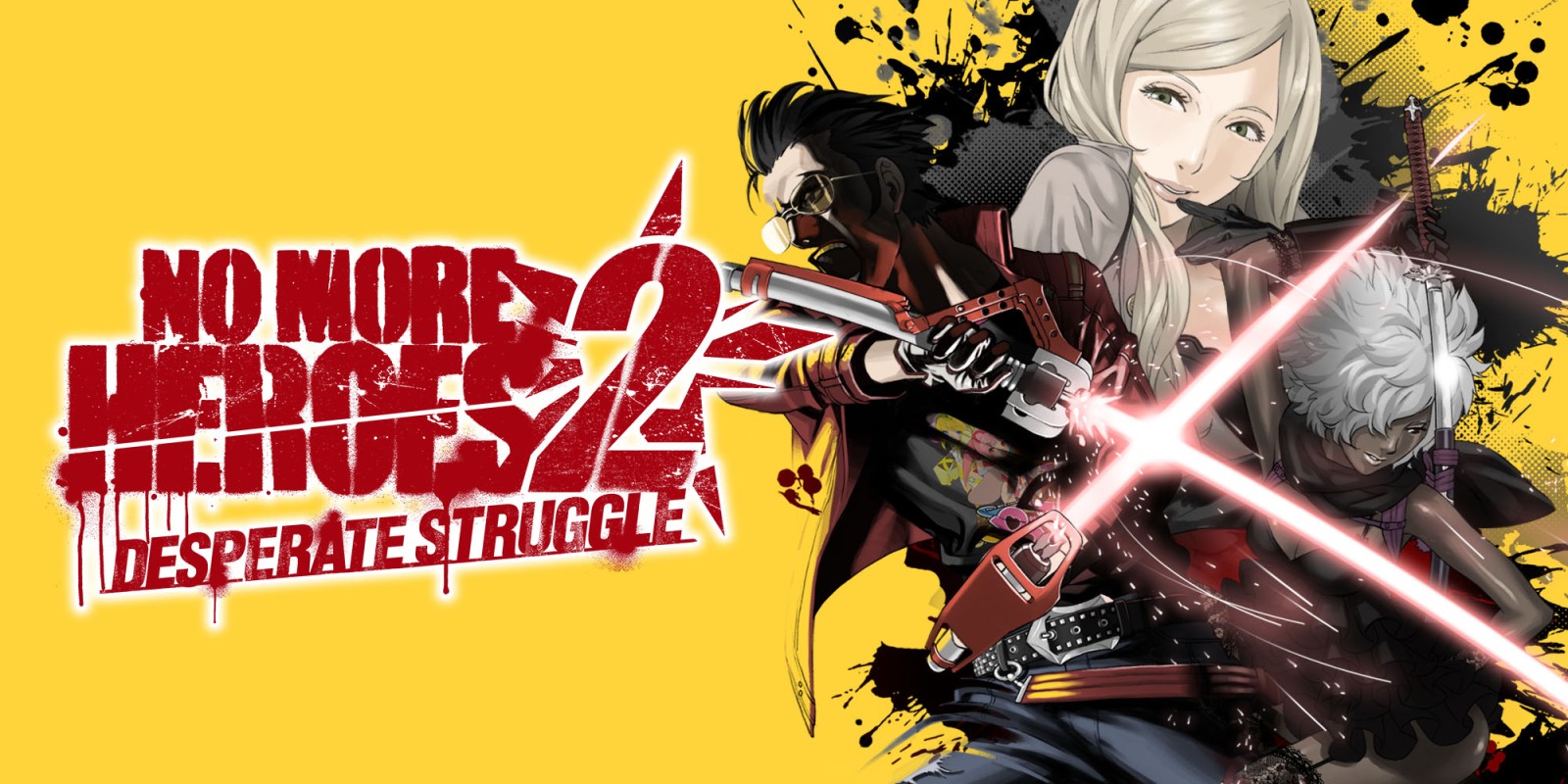 No More Heroes 2: Desperate Struggle is the sequel to No More Heroes and was released on the Nintendo Wii in 2010. Just like the first game, the sequel was developed by Grasshopper Manufacture and published by Marvelous. Suda51 had always developed games as a single entry but due to the popular interest and relative success in No More Heroes, he decided to give the game’s hero Travis Touchdown a deserving sequel.

No More Heroes 2: Desperate Struggle was considered to release only on Xbox 360. However, with the original game already on Nintendo Wii, the control scheme of the Wiimote and Nunchuck also made logical sense in respect to the game’s style of gameplay.

The sequel was well-received by critics, praising its sense of humor, innuendos, the fun new side jobs, and so on. Unfortunately, in regards to sales, it wasn’t as successful as its predecessor with the remastered version of the original selling more on a single platform than the sequel did across all platforms.

No More Heroes 2: Desperate Struggle returns to the fictional town of Santa Destroy, California and follows Travis Touchdown who after claiming the No.1 position in the United Assassins Association (UAA), retires from being an assassin. Three years have passed since the events of the first game and Travis finds himself pulled into the vicious cycle of kill or be killed.

Travis returns to Santa Destroy to fight against the brother of an assassin that he killed in the first game. On the same night, some unknown thugs enter the video store Beef Head, where Travis’ best friend Bishop works, and mercilessly murder him. Travis learns of his friend’s death and is seething with anger and a thirst for revenge. He calls Sylvia Christel, an agent of the UAA so he can find and kill Bishop’s killers. Sylvia reveals that the hit was set up by Jasper Batt Jr., the CEO of Pizza Batt and now No.1 ranked assassin in the UAA. Due to Travis leaving the UAA, he has to start climbing the ranks again from rank 50 if he wants to have a shot at Jaspar Batt Jr.

Just like the first game, No More Heroes 2: Desperate Struggle is an arcade-style, third-person hack and slash game. Travis touchdown is armed with his trusty beam katana yet again and has to participate in Ranked battles yet again so he can improve his own ranking in the United Assassins Association. Travis can use a mix of slash attacks with his weapon and melee attacks by punching and kicking. Wrestling moves also make a comeback and are used to finish off enemies with stylish suplexes. Killing enemies will make a slot machine to appear and can trigger special effects. One such effect can turn Travis into a Tiger so he can maul any enemies still standing.

Waiting for Travis at the end of each stage is a boss fight with a ranked assassin. Each boss has a unique moveset and special attacks like laser beams, homing missiles, poison breath, etc that will have you changing up your fighting style each time in order to defeat them. When Travis kills an assassin, he will take their place in the rankings.

Unlike in the first game, where you had to grind side jobs in order to pay for each Ranked Battle entry, Players can go straight from fight to fight should they wish to. That is not to say that Side jobs have been completely removed. On the contrary, Travis can take part in Side jobs any time he likes to earn cash to buy new clothing items, beam katanas, or train himself up at the Gym. The side jobs have become quirky 8-bit minigames (with the exception of one that is a revamped version of the scorpion side job in the last game) that have their own challenges but are much more fun to play than those in the original game.

No More Heroes 2: Desperate Struggle has done away with the open-world section that was present in the last game and has opted for a more streamlined menu and map. The open-world environment was planned but was ultimately cut due to time constraints during development. In its defense, the new menu layout meant players could get back into the action sooner rather than having the long slog of traveling from point A to point B and back to point A again.

At first glance, No More Heroes 2: Desperate Struggle may seem like it has less content than the first game and it has made some cutbacks on some things but expanded on others. The Side Jobs for example has multiple stages to them with the option to earn more cash. Assassination Jobs and Free Battles have been removed and have been replaced by Revenge Missions. These are notably less in number and can only be played through once.

That said, with the game being as short as it is, it isn’t too much of a pain to play through the game again on New Game plus where collectibles, weapons, and other things carry over so you don’t have to collect them all over again. When you do start over, you can also opt to make the difficulty level easier or harder depending if you want more of a challenge or just want to be OP against weaker enemies.

Motion controls make a return but are entirely optional. Just like the first game that released on Switch, the controls have been adapted for the Pro controller and separate Joy-Cons. The waving of the Joy-Cons are restricted to finishing moves though they can swing the sword around for a strong attack. Motion controls are turned off by default but be turned on in the Config menu.

Though Travis is predominantly the main playable character, other characters like Shinobu and Travis’ twin brother Henry are playable for the first time. Both characters have their own distinct movesets that differ from that of Travis. Unfortunately, you can’t choose to play as Shinobu or Henry. The two are restricted to their specific story beats, which is a bit of a shame. I would have liked to have played with them freely on other Ranked Battles as well.

For anyone who wishes to repeat boss fights, they can but you will have to go to the main menu to do so. On the main menu, you can choose one of three options: New Game, Load Game, and Death Match. Death Match here is not the same as in most other games where you can play against other players. Instead, it gives you the option to replay boss fights with any of the assassins that you have beaten. As in the main game, you are restricted to playing as Travis, Shinobu, and Henry in their respective boss battles.

No More Heroes 2: Desperate Struggles shares the same punk music style as the first game, which is just as well due to the anarchic nature of the game and its protagonist. The OST is inspired by the rebellious punk music of the 70’s and 80’s and is heard throughout the game with the exception of going to the restroom to save your game. The music will cut out and will resume at full throttle again after you leave.

Robin Atkin Downes returns to voice Travis Touchdown once again and a number of other known voice actors also lend their talents like Jennifer Hale and Tara Strong. The main story dialogue is just as crass as it is genius. There is a lack of variety of voiced lines when it comes to the enemies. You will constantly hear the same 5-6 line screamed over and over again as you slice your way through opponents and it can get tedious to hear at times.

No More Heroes 2: Desperate Struggle has the same comic/visual art style as its predecessor. It has seen a graphical improvement on Nintendo Switch thanks to Engine Software handling the porting process and giving the game an HD makeover. The cutscenes on the other hand are straight from the original version and do look a little rough around the edges, more so in this game than they did in the Switch port of No More Heroes. They do look a little better as the game progresses but the first load of cutscenes almost looks out of place in regards to the rest of the game.

The game’s performance and frame rate is spot on. The is hardly any lag, if at all, the loading times are pretty short, and I have not noticed any bugs or glitches during my time with the game. No More Heroes 2: Desperate Struggle plays fantastically on Nintendo Switch and it is fantastic to play as well.

Playing both No More Heroes and No More Heroes 2: Desperate Struggle back to back as been a joy for me. Both games have the same base gameplay but I ultimately prefer the sequel over the first game. The battles feel more engaging and the minigames are actually fun. Not being forced to grind for cash has made this game feel much more enjoyable.

I do wish that missions could be replayed as opposed to having to play through the whole game and then start from the beginning again. The in-game collectibles may not necessarily be important or necessary to collect but it is a nuisance if you are trying to collect them all. Replaying the whole game again and again because you keep missing one collectible seems overkill when a simple “Replay Mission” option would suffice.

Still, it isn’t a deal-breaker. This game is still fun and entertaining regardless and its colorful and eccentric cast make No More Heroes 2: Desperate Struggle such a blast to play. I am now even more hyped to play No More Heroes III when it eventually comes out sometime in 2021.

No More Heroes 2: Desperate Struggle is anything but what its subtitle suggests. Its fast-paced Hack & Slash gameplay is crazily addictive. The minigames are far more enjoyable and Travis is still as crass as ever. Graphical Cartoon Violence, strong Language and promiscuously dressed ladies. Need I say Moe? I mean More?!