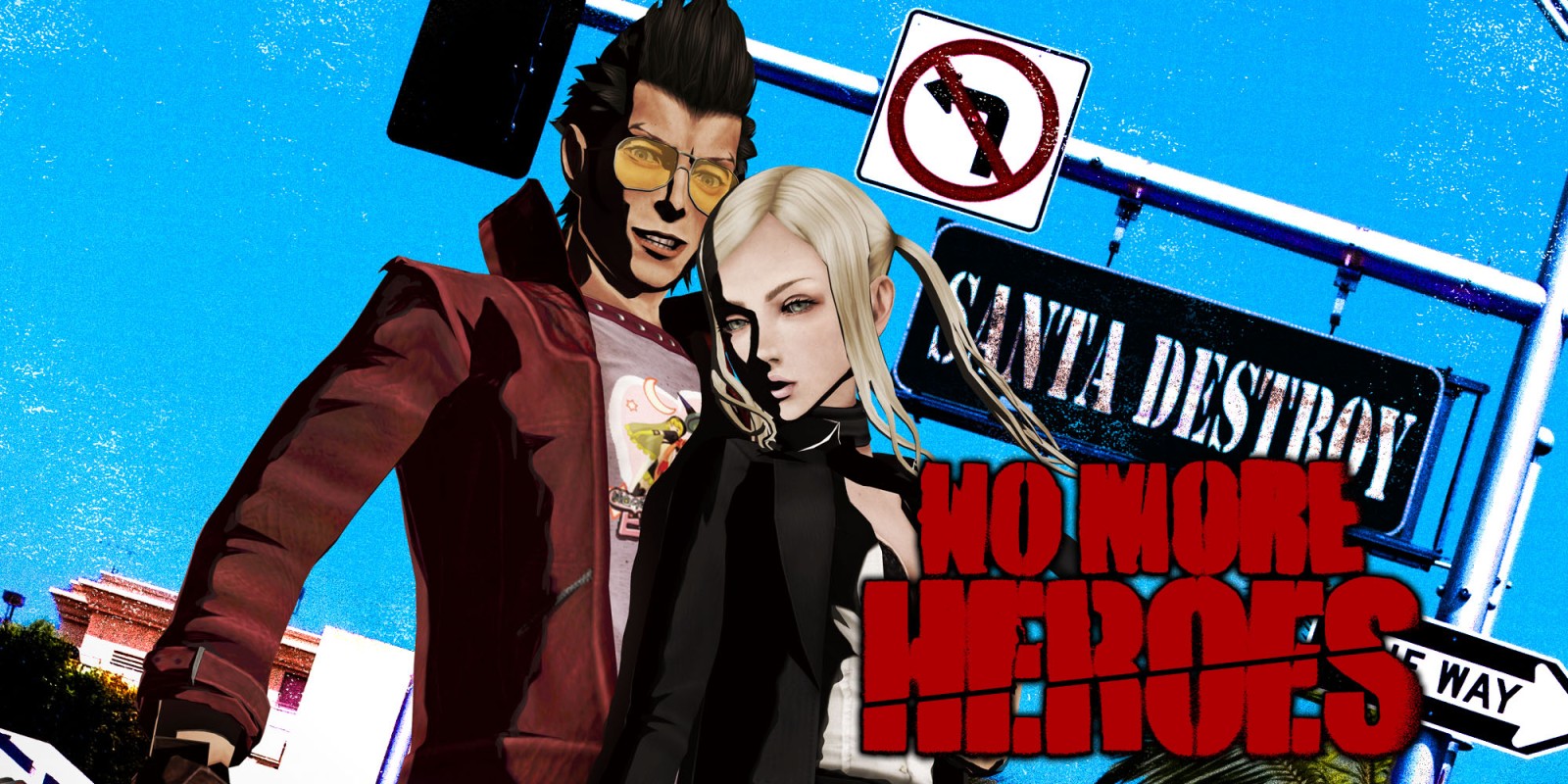 No More Heroes first released on the Nintendo Wii back in 2007 in Japan and 2008 in the US. The game was developed by Grasshopper Manufacture and published by Marvelous. Goichi Suda (who is also known to go by his moniker Suda 51) wrote, designed, and directed the game.

In 2010, a sequel was spawned in the form of No More Heroes 2: Desperate Struggle and also released on the Nintendo Wii. Both games became cult classics but it would take another 11 years before a third entry into the main series (No More Heroes III) would come into being. A spin-off game titled Travis Strikes Again: No More Heroes released on Nintendo Switch back in 2019. It provided a different style of gameplay to its predecessors and helped test the waters to see if the world was ready for another No More Heroes game.

During a Nintendo Direct Partner Showcase held on October 28th, 2020, both No More Heroes and No More Heroes: Desperate Struggle were revealed to be releasing on Nintendo Switch that day. It has been 10 years since they first debuted on Nintendo Wii and now it’s time to dive into them once again, starting with No More Heroes.

No More Heroes is set in the fictional town of Santa Destroy, California. It follows an American Otaku called Travis Touchdown who loves Wrestling and Anime. After winning a Beam Katana in an online auction, Travis is penniless and is in need of a serious cash injection so he can afford to buy video games and collectibles.

Travis meets a mysterious woman called Sylvia Christel in a bar one night who offers him a solution to his cash-flow problem. She offers Travis a job that requires him to kill a man who goes by the name Helter Skelter. Travis takes the job and kills Helter Skelter. What he didn’t know is that by killing Helter Skelter, Travis has unwittingly taken his place in the United Assassin Association World Rankings.

Sylvia appears and says that Travis is now a target for other assassins and that the only way for him to shake them off is to kill the other higher ranking assassins and become No.1. Travis sees that he has little choice and agrees to become the No.1 Assassin in the world… after some feminine persuasion from Sylvia who says she will sleep with Travis if he becomes No. 1.

No More Heroes is a third-person hack and slash game with linear stages and an “open-world” city to explore. Armed with a weapon known as a beam katana, Travis must participate in Ranked battles in order to improve his own ranking in the United Assassins Association. He has to fight his way through multiple opponents across different stages with a blend of slash attacks from his beam katana and physical attacks in the form of grappling and wrestling moves.

Each stage has five chests dotted about in various locations that hold collectibles. They don’t offer much except give completionists another challenge to overcome. They are usually hidden behind a corner but can sometimes be found in plain sight. At the end of each stage, there is a boss fight with a ranked assassin. Travis has to kill them in order to take their place in the rankings.

However, it isn’t as straightforward as that. In order to get an opportunity to knock of the high-ranking assassins, you need to pay an entry fee. So, how and where do you get the money to pay the admission? Why at the job office of course! The Job office allows Travis to take on part-time jobs in order to earn cash. These jobs can consist of collecting coconuts, cutting grass, fueling cars, etc. They are essentially minigames of menial tasks that are not meant to be fun. They instead serve as an end to a means so you can earn cash (essentially a form of grinding before you are ready to progress through the game) and get back to hacking and slashing folk.

In between Ranked Battles, Travis can freely explore the city of Santa Destroy. He can visit the aforementioned Job Center and then travel to the location where the jobs are. Several amenities are available to visit as well. The clothes shop allows Travis to purchase clothes and change his attire. The Gym will allow Travis to improve his strength & vitality. The K-Entertainment building will allow Travis to take on Assassination jobs for cash rewards.

Once you have earned enough cash, you can pay your entry fee for the next ranked battle at an ATM. You will then need to return to the motel so you can receive a phone call from Sylvia who will tell you where you can fight the next assassin and move the story along. Leaving the motel room after the phone call will open up the location to the next ranked battle fight. You can then choose to head straight there or continue to mosey around the city of Santa Destroy.

Speaking of Travis’ motel room, it serves as a kind of hub where you can change your attire with clothes that you have purchased. You can also check out collectibles that you have found throughout the game and save your progress. On the subject of saving your progress, what we really mean is you have the privilege whether you like it or not to watch Travis go to the toilet and drop his slacks. If that is what saving in this game is, I wouldn’t want to see Travis’ definition of “Loading”.

When it comes to content, No More Heroes is rather a short game with about 12-14 hours of gameplay for first-time players. Experienced players will most likely be able to beat the game even quicker if they are already familiar with the gameplay. Of course, this can depend on what difficulty level you are playing on. There are three difficulty Modes: Sweet (Easy), Mild (Normal), and Bitter (Hard). For new players, they will probably feel more comfortable with the Sweet difficulty. Those looking for a tougher challenge that will feel more rewarding afterward will most likely go for the Bitter Difficulty.

When it comes to controls, No More Heroes supports both standard and motion controls. The controls have been adapted for the Nintendo Switch for full button functionality and no need for “silly Wii-mote” waving. Still, if that is your thing, you can use Joy-Cons and turn motion controls on. However, motion controls don’t work in the way that you might expect. You can’t wave the beam katana around by simply waving a Joy-con about. It still requires button inputs in order to swing your blade in-game. Motion controls work with changing your swings from Low attacks to High attacks and vice versa. They are also used for certain on-screen prompts like when doing a finishing move or a wrestling suplex.

No More Heroes has a very grungy, punky look and feel to it that extends into its audio. You can hear it from the short electric guitar rifts between screen transitions to the full music tracks of the main OST. The game’s music is influenced by The Stranglers. In fact, the game even shares the same name with a song by the UK punk band. If you ever thought it was too much of a coincidence, you can take pride in knowing that it wasn’t, The game does take a lot of inspiration and influence from the song and the band.

No More Heroes features full voice acting for the main cast and some voiced lines for supporting characters. Robin Atkin Downes voices Travis Touchdown masterfully and gives the character so much personality. The voice actor is also no stranger to voicing characters in Suda51’s games as he also voiced Hiro Kasai in Killer7 and has many other notable performances in Film, Television, and Video games alike.

The remaining main voice cast also provides their characters with plenty of charisma and charm. The dialogue between characters is filled with adult humor with plenty of sexual overtones and profanity that can turn the air blue. It is crude, rude, and 100% intentional and I love it. The supporting characters, on the other hand, don’t get to share in the limelight as the main cast. Their lines sometimes coming off as flat and also sounding a little off. The guy in the T-shirt shop, for example, I wouldn’t fully understand what he is he is saying if it wasn’t for the text boxes.

For a general port of a Nintendo Wii Game, No More Heroes does look pretty darn good on Nintendo Switch. To be fair, its visual aesthetic probably helps a lot with that. The graphic novel art style is one that never feels “dated” and it makes the game look as good now as it did then. Sure, you could say a lot of the game’s models are blocky and the textures look rough at times but even then, you can look past all that for its violently graphic visuals and addictive gameplay.

The game’s performance is relatively smooth but it is not without some flaws. Although I have not had many issues with frame rate drops, I have had too many instances of pop-up textures loading before my very eyes. I have come to expect that with many current-gen games like The Outer Worlds and other games that can be quite demanding on the Nintendo Switch. However, No More Heroes, shouldn’t technically be as demanding on Switch and yet somehow it is. The Pop-up textures mostly refrain to the textures on the sides of buildings but it looks and feels choppy all the same.

I have slept on No More Heroes for quite a long time. I have known about the game for as long as I have had a Nintendo Wii and I never felt compelled to try it out. It wasn’t until talking with a friend of mine years later did I start having an interest in the series and after playing Travis Strikes Again: No More Heroes, I really needed to play the original game as well.

With the original No More Heroes and its sequel now on Nintendo Switch, I seized the opportunity to play the game and I was not disappointed. The minigames may be ridiculous but they were still amusing to play nonetheless. The actual gameplay itself may be a tad repetitive but it never felt boring. I enjoyed playing the game from beginning to end and wondered to myself “Why I never played it sooner?”

The visuals look good and the controls are responsive. Character movement seems to be missing a gear in the sense that you can go from standing still to taking a large stride with the slightest of touches on the joystick. It made the likes of the Scorpion Extermination side-job and the Mine Sweeping side-job unnecessarily tasking as a single wrong stride will result in being stung or blown up.

No More Heroes is crude, rude, extremely lewd, and we love it for it. Certainly not for a young audience and is sure to raise as many eyebrows now as it did in its Wii days. Even for the humor and story alone, it is a wild ride that should be experienced at least once.