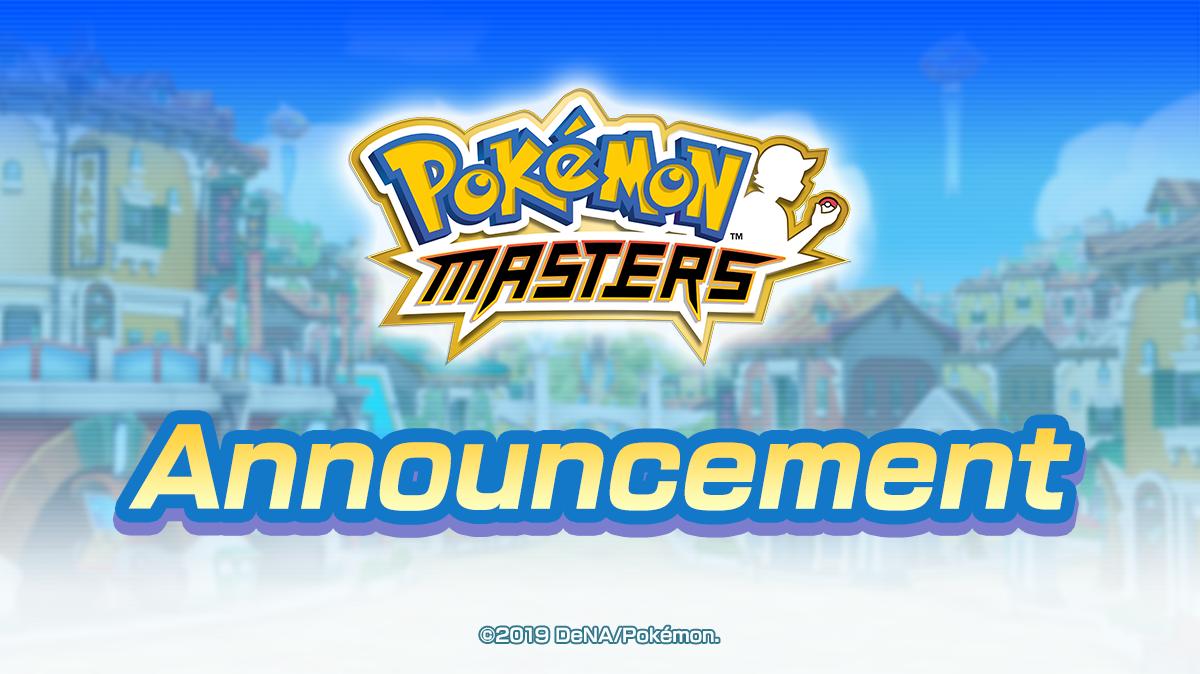 Hello Pokémon Masters fans! The latest news for the mobile application has arrived strait from the games developers at DeNA. This next producer letter talks about future plans for the game, the new Sync Grid Feature, a new Legendary Event, and more arriving to the Pokémon Masters game over the next two months.

A Message from the Pokémon Masters Team (Vol. 6)

Greetings, Trainers.
We’re the producers of Pokémon Masters, Yu Sasaki and Tetsuya Iguchi, here with a new message for you.

This time, we’ll be sharing details about the new Sync Grid feature, January’s legendary event, and what you can expect in the next update.

Sync grids will go live with the content update scheduled for mid-January. They’re a new feature that allows you to strengthen your sync pairs in various ways.
A portion of each sync pair’s grid will be rolled out during upcoming in-game events, so please stay tuned for updates!

In order to activate tiles on the sync grid, you’ll need to collect sync orbs. At the beginning of a battle, the “Sync orb chance!” message may appear—if it does, use a sync move during the battle for a chance to earn sync orbs as drops.

By using sync orbs to activate tiles, you can teach your sync pairs new grid skills. However, activating tiles also reduces your pool of available energy, so however you choose to use that energy is bound to be unique.

Some tiles on the sync grid have additional requirements, such as a minimum sync move level.

We’re planning to have the following available to unlock:

All sync pairs will have sync grids when this feature is launched. With the exception of some sync pairs, the grid skills that can be learned initially will be limited. Sync grids will be expanded in the future for the rest of the sync pairs, as well as for newly released sync pairs.

Sync pairs that will have expanded sync grids in this update are Main Character & Pikachu, Flannery & Torkoal, and Flint & Infernape.

In order to accentuate each sync pair’sunique characteristics, we’re making sure to fine-tune the grid skills as we release them. We’re also considering ways to have sync orbs become obtainable from events, so we hope you look forward to your favorite pair getting their sync gridexpanded.

Sync orbs that are unique to the sync pairs you team up with in the main story will be exchangeable during their type-specific training events.

In late January, Pryce & Seel will have their sync grid expanded.
Generally, we’re planning on expanding sync grids for about four sync pairs each month.

A new legendary event is coming in late January, in which an immensely popular Legendary Pokémon will join the fray.

Also, Event Mission Bingo will debut, offering items for training as well as sync orbs. You can get lots of useful items as you enjoy this new feature.

Many opponents that are weak to Rock-type attacks will appear in this legendary event, so we recommend training up sync pairs like Sygna Suit Brock & Tyranitarand Grant & Amaura. Also, moves that lower your enemy’s defenses may prove vital.

We have plans in store that will give you new ways to enjoy using your favorite sync pairs.

It’s been our goal to improve the overall gameplay of Pokémon Masters with these updates, so if you have any comments or suggestions regarding what we’ve been doing, we’d love to hear from you.

The Battle Villa is a feature that lets you train up to nine sync pairs per day.

The sync pairs you’ll face depend on the hall (or level) you’re in. You’ll need to pay close attention to your opponent’s weakness when building a team, but don’t rely on using supereffective attacks alone. Status conditions and support skills are important, too.

You’ll want to train your support sync pairs and strike sync pairs that can hit the enemy’s weakness. Depending on the hall that you’re in, skills from tech sync pairswill also prove to be useful, so focus on building a balanced team.

After completing certain halls, you’ll receive items that are exclusive to the Battle Villa. These items are sure to come in handy as you make your way through, so use them well.

The Battle Villa is intended to test how far you can make it within a set period of time, so your progress will be reset at fixed intervals. When progress is reset, you’ll receive gems based on how far you made it. Challenge yourself and see how far you can get each day.

Using the rewards you get from the Battle Villa, you’ll be able to grant your sync pairs lucky skills, which are a new way to customize your favorite sync pairs.

Lucky skills are a type of passive skill that provide beneficial effects when conditions are met, such as when a certain move is used. Consider the moves and passive skills your sync pairs have so you can teach them complementary lucky skills.

Pokémon Masters celebrates its six-month anniversary this February.
To show our appreciation to everyone for their support, we’ll hold a special rally in mid-February.

Here’s what we have in store.

The Battle Villa will make its long-awaited debut on Pasio.

We’re giving story events an overhaul, starting with the update scheduled for late February. You’ll be able to enjoy a new story experience that has incredible rewards, like sync orbs and ★ Power-Ups.

Tons of Pokémon are ready to evolve!

Several unevolved Pokémon will become able to evolve! We’ve received many requests for this since the launch of the game, so we hope you enjoy the new Evolutions!

What to Expect in the Next Message

In our next message, we’ll tell you all about the Six-Month Anniversary Celebration and look forward to updates for March and beyond.

Our next message is scheduled for late February.

We are continuing to make the world of Pokémon Masters more enjoyable for players. We appreciate your feedback, so if you have any comments regarding our planned improvements, please don’t hesitate to contact us through the Feedback section in the game.

Until next time, thank you for playing Pokémon Masters.