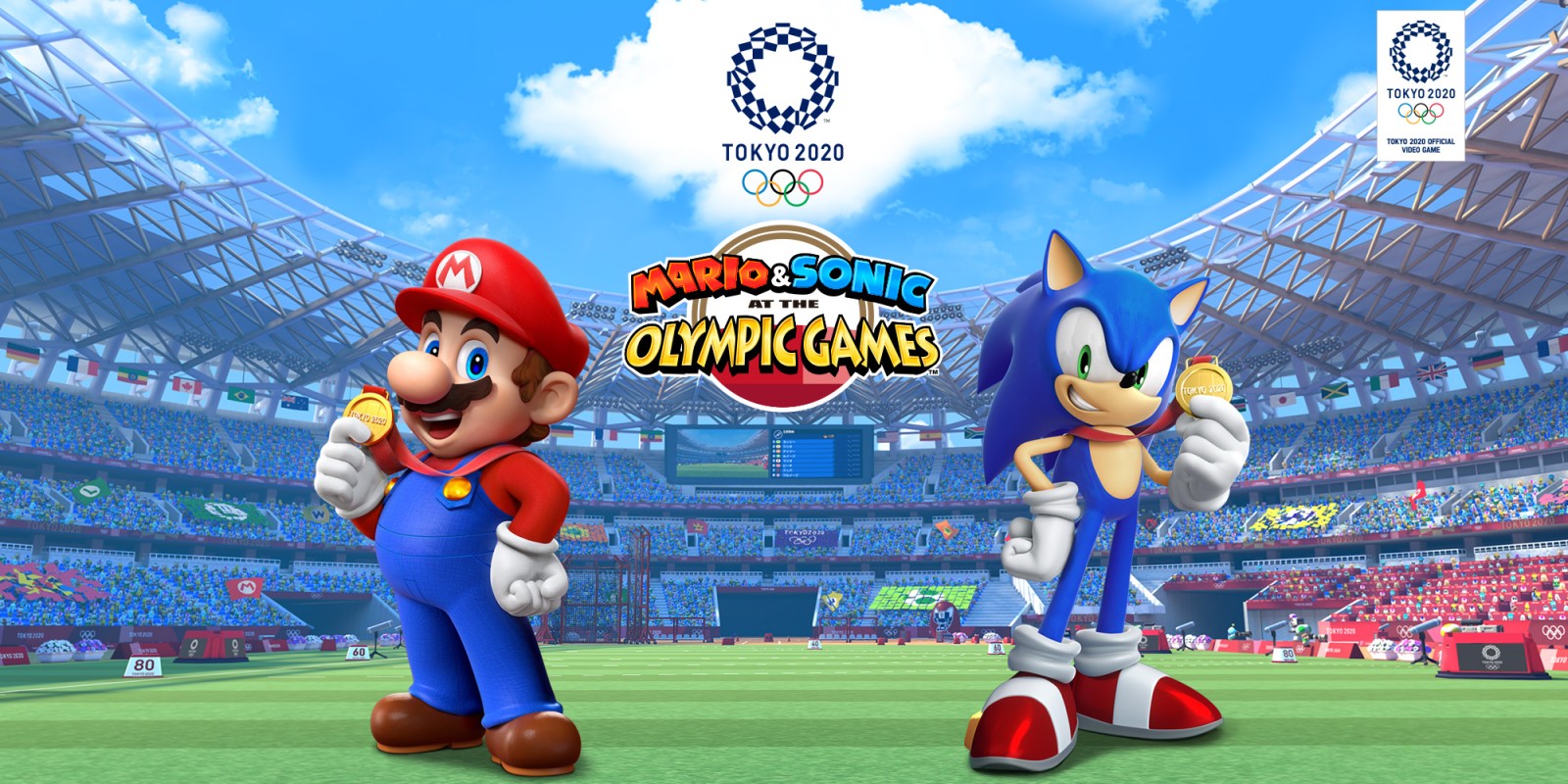 The Super Mario franchise has been around for over thirty years, spanning numerous crossovers, collaborations, ground-breaking titles, a cartoon, and even a movie. Fast forward through the highs and lows to 2007, when SEGA and Nintendo premiered the first true collaborative experience between the mustachioed plumber and the blue blur.

Fans of both franchises joined together as characters from both Sonic the Hedgehog, and Super Mario, came together to battle it out for Olympic glory. The first of six installments released to critical acclaim and spawned an entirely new franchise of games that would await fans every few years.

For the first time in the series’ history, there’s a story mode alongside the single-player and multiplayer modes. I was skeptical to start the mode as I was cautious as to whether or not this would be slapped on and poorly written, but I was pleasantly surprised. The story mode allows you to roam freely around Japan in modern-day and in 1964.

This mode’s biggest quirk is that Mario, Sonic, Bowser, and Eggman become trapped in a device of Eggman’s creation and are essentially sent back in time to the 1964 Olympic Games in Tokyo. Sonic and Eggman are rendered in sixteen-bit while Mario and Bowser don their classic eight-bit look, which is a neat touch. I still wish they would have gone with the universal theme of every character being in sixteen-bit, but that’s just a nitpick of mine.

Doctor Eggman spent years crafting a video game device that he would eventually use to capture his nemesis, however, he miscalculated its use and was sucked into it alongside Mario, Sonic, and Bowser. Luigi, watching the chaos unfold nearby, would then grab the device and take off, which would then lead into a wild goose chase to figure out what to do with the device and how to save his brother and friends. Split into a variety of different chapters, the cast in both time periods are attempting to collect as many gold medals as possible in order to return things back to normal.

Mario and Sonic overhear Eggman and Bowser scheming and learn that the only way to leave 1964 is to participate in some of the events being hosted at the events. The story itself isn’t convoluted or crazy in any way with its linear structure, but its inclusion is appreciated. Dialogue is witty and genuinely entertaining, and the character encounters are wacky enough to fit into the universe built by previous entries. The game shines all the way up to this point. Presentation-wise, this is one of the best games I have ever had the pleasure to check out. Outside of presentation, is when the cracks really start to form.

It’s nearly impossible to find a game that lacks faults, but this one is full of them. As someone that has played past installments, I had a lot of hope during the build-up to Mario & Sonic at the Olympic Games Tokyo 2020. Bottom line: I just did not find the actual Olympics games to be enjoyable.

There was either too much going on or not enough going on. Especially frustrating is the pacing for some of the mini-games, for example, Soccer. It’s normally a fast-paced sport but here, it is the slowest it has ever been. Playing soccer in this game immediately made me wish for the return of Mario Strikers where players actually had control of the ball and had enough time to play the game and have a good time.

There is a good time to be had playing through the twenty-plus sports, but not at its current price point. Playing locally and online with friends allowed these issues to pour out as there is no depth or reason to replay these games. After a single run through with some of the mini-games, we felt like we had gotten as much as we could out of the particular sport.

Previous installments held my attention more, even with the lack of content, but it’s noticeable that the development team swung in favor of quantity over quality here. Motion controls on the Wii felt flawless and the best way to play the minigames in the first game, but there is absolutely no reason to choose them here. The vast majority of sports don’t even allow the use of motion controls, and the ones that do are the ones that are painstakingly boring and dull.

An attempt to introduce brand new sports and minigames was made, with a few of these being enjoyable, but there is no middle man with most of these. They were either fun or a chore to play. Make one mistake with a button press and there’s no chance to come back and win the minigame. This is not to downplay the game entirely as there are some very well designed games among the crowd. Unfortunately, there is not enough for me to confidently say that the game as a whole makes for a fun experience. Surfing and rugby stood amongst the others as some of the more enjoyable sports, but having two of the thirty be somewhat enjoyable was not nearly enough.

Playing through the campaign made me notice that the effort to include so many different minigames and sports drastically impacted the overall product. Brand new nostalgic 2D events attempt to change the pace of the game and make for a different experience, however, I found those to be less enjoyable than the actual events. Some of the events are overly intricate, where learning how to play lacks purpose as the games end in the blink of an eye.

Fighting against Bowser in a judo match required me to learn odd button presses and stick movements just for me to knock Bowser outside of the boundary within a matter of seconds. There were rarely any times when completing a minigame didn’t feel like a task that had to be accomplished. Some may find joy in these, but there wasn’t a single time where I didn’t feel like I should be doing something better with my time.

Back to some positives. There is plenty to do here when roaming through the menus. When comparing this installment to other sports compilations, this is the complete package. From nostalgic events, to dream events, and some brand new ones, the game does not slack when it comes to content. Story mode is an additional time waster for those looking for some single-player content, and families and party hosts will be pleased to hear that local multiplayer is stronger than ever before.

Those interested in completing the multi hour long campaign will be happy to know that the mode does feature collectibles in the form of fact cards, which give facts about the Olympic Games themselves and of the many characters present in the game. These can be found when playing as Luigi and the others in modern times, and back in 1964 when playing as Mario and Sonic. Speaking with the many characters scattered around the map will sometimes provide the player with a fact card, or other times provide some meaningful insight into the chapter currently being played.

The sports included with the game include skateboarding, surfing, sport climbing, archery, boxing, soccer, track and field, and many others. Some are more fun than others depending on the type of experience you are looking for. Included within the game is a wide supporting cast with relevant characters being front and center. While lesser known characters like Rouge the Bat are present, though she only happens to be playable in one minigame. Several other Sonic the Hedgehog characters share the same fate and are locked to one event, which is mind boggling as there is no reason for them to not be playable in all of the events in the game.

Sound design is at its best as you roam around Tokyo and admire the scenery and design of the buildings and events. Tunes are upbeat and fit the tone of the game in more ways than one, and repeated tracks are enjoyable to listen to. Playing through the many different events triggers different music tracks that are all relaxing and a joy to play the game to.

Visually, there are no complaints to be had. Charm oozes from corner to corner, and it’s visible from the opening that lots of love was put into making the game play and look as good as possible. It’s a pretty large step-up from the 2016 Olympics even when playing in handheld mode. Characters are animated extremely well and each character reacts to winning and losing in different ways, even in the story mode. While the Switch is docked, the game blossoms with its bright colors and graphic design.

Unlike other Switch titles, Mario & Sonic at the Olympic Games Tokyo 2020 runs as smooth as butter. Lag is nowhere to be found, and the game hardly chugs even with four simultaneous players on a single console. Even when playing online through Nintendo’s online service, the game connects extremely quickly to friends and runs as though you are playing with that person locally. Playing the game in handheld mode runs well overall but with some issues here and there loading between games/events.

Overall, the game fell flat in more areas than I had expected, leaving me disappointed after waiting years for a new installment. Having the game for a month allowed me to try the events under different circumstances and test the online settings, which made it all too obvious what the final verdict would be. Depth is a huge issue with this game and a quick patch won’t fix that.

Balancing feels completely off and games are way too short sometimes and lack the replayability that made the older installments so much fun to play with friends and family. There is a ton of content to be played, but having quantity over quality really factored into how the game turned out. Other minigame compilations feature a wide variety of games to choose from with only a few being lackluster, while Mario & Sonic at the Olympic Games Tokyo 2020 faces the exact opposite problem.

After waiting years to play a new installment with my close friends, there has been quite a decrease in quality after playing previous entries in the franchise. Events are slow-paced and a chore to play, while the sports themselves lack the charm found in past games. There is some fun to be had with the final product, but not enough for me to encourage those on the fence to rush out and buy the game at full price at launch.

*A download key was provided by SEGA for the purposes of this review.