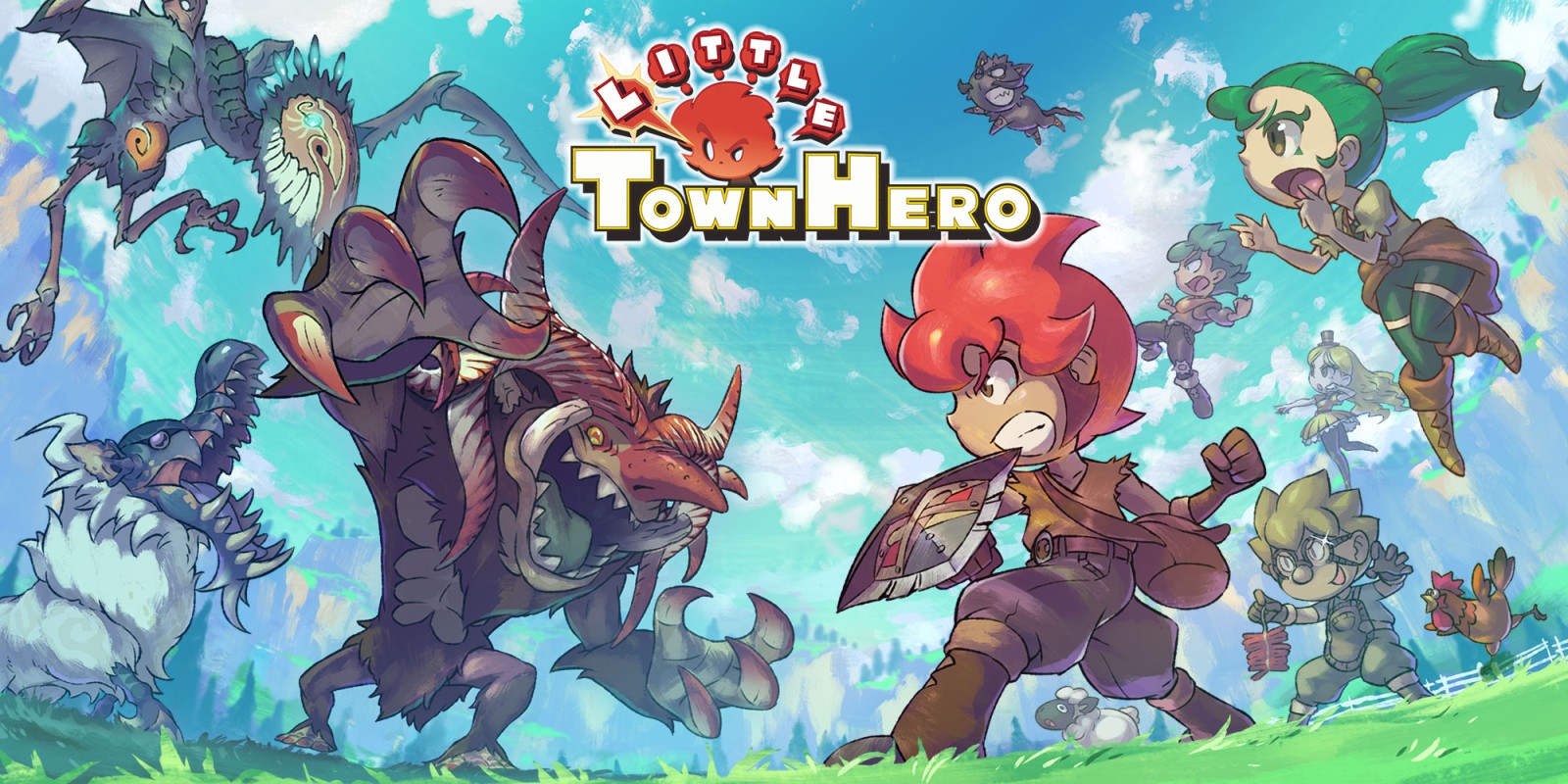 Little Town Hero is a brand new role-playing game from the developers at Game Freak. The game was first revealed under the temporary name “Town” back in the September Nintendo Direct in 2018. Almost a year later, the game was given a final name and trailer showcasing gameplay in the September Nintendo Direct in 2019 with a release planned for October 16th.

Got any ideas, Hero? Little Town Hero’s story begins in an isolated village. You soon find out that the village is guarded by the King and his Servants and that no one is allowed to leave. You, the Hero are different. While everyone else moves on with their everyday lives, the main protagonist dreams of seeing the outside world beyond the gate.

One day a monster attacks, presumed not to exist, Axe must use what he’s learned in combat and the red stone he has found, to defeat this foe and defend the village. Secrets are soon discovered about the village and these Mysterious stones…..

Little Town Hero offers different gameplay than your typical role-playing game. Like that of a collectible card game, you collect ideas known as “izzits” and those make up the combat system within the game. To earn a dazzit, you must first discover an izzit which is simply an idea. Once you have an izzit you can change it into a dazzit using battle points which, then becomes an attack you can use to counter the dazzits of your opponents. Dazzits are broken up into three different types Yellow, Red, & Blue. Yellow gives Shield, Blue gives special effects, & Red gives an attack.

Dazzits are displayed in battle with 2 numbers showing both attack and defense and it is your job to choose the correct one strategically to use against your opponent. Once you break all of an opponent’s attacks it is known as an “All Break” and if you have skill points left including a red dazzit, you’ll be able to attack and damage the enemy’s health or shield.

As mentioned above, Little Town Hero offers an in-depth and strategic battle system. As you progress in the game, you’ll be given the opportunity to tackle numerous side quests that’ll unlock additional features for use later in the game. One feature is the ability to rechallenge past enemies once you complete a side-quest in Chapter 3. Need help learning or practicing the combat system? Well, head over to the scarecrow in town down in the wheat fields and it’ll ask you to choose the enemy you’d like to fight again.

Little Town Hero wouldn’t be a typical role-playing game if it didn’t offer a skill tree! As you complete quests, win (or even lose!) battles, you’ll earn Eureka point,s which can then be used on an associated skill tree. The skill tree will increase the individual stats of your dazzits or even increase the overall HP & Shield Axe will have when participating in battles.

With a dedicated soundtrack from Undertale creator Toby Fox, the audio in Little Town Hero just oozes with charm. The overworld music was one of my favorite tracks, not to mention, it fit the aesthetic of the world really nicely. Each boss in the game contains a different music track & the overworld music between day and night also differs. Toby Fox definitely delivered in this regard and the soundtrack is not to miss!

Little Town Hero shines in its overall visual appearance. A unique fantasy setting is established and the overall look of the game is quite charming. From the game’s diverse cast of characters and the look of its overworld, you can tell a lot of work went into the visual department to create a wonderful fantasy-like setting.

With the above visuals, there did come some minor performance hitches though. Battles would sometimes stutter or frame rate drops would occur & movement within certain sections of the overworld also had instances of frame rate drops as well.

As mentioned above, Little Town Hero definitely comes with its flaws. With performance and frame drops from time to time, and a in-depth combat system that may take some time to get used too, it would surprise me if fans of Game Freak shy away from this one. Soundtrack issues also included minor cutting out of music, weird transitions, and more.

The game does have its positives though, the overall world and atmosphere are nice, and not to mention the added soundtrack from Tony Fox. If you’re a fan of collectible card games fans of that genre may find some pleasure with the battle system in Little Town Hero. The games entire premise is that you are bound to one area (the village) the entirety of the game, and I definitely feel like Game Freak hit that strait on as the world was well developed and the boss fights were each unique. An additional touch is that the game’s title screen changes as you progress in the game!

If you don’t mind performance or frame issues, Little Town Hero is a charming experience that shouldn’t be missed on Nintendo Switch. Role-Playing fans alike will find an interesting and strategic take on the games battle systemand those who like the collectible card game formula will find pleasure in it as well.