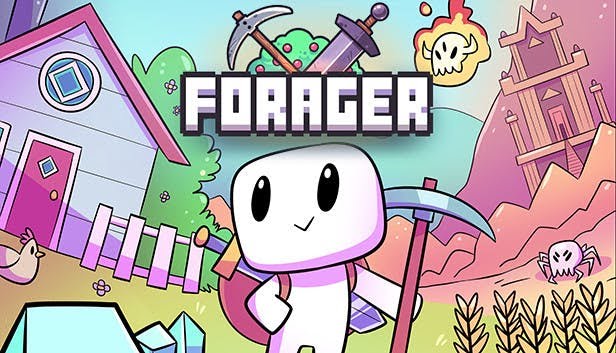 Starting as a simple Game Jam project for standalone developer HopFrog, Forager is a 2D open world game that is inspired by your favorite exploration, farming, and crafting games like Stardew Valley & The Legend of Zelda. The game is developed by HopFrog and published by Humble Bundle for the Nintendo Switch.

While there isn’t an immediate story to Forager, the game allows you to set off on your own adventure and to choose your own path on how you’d like to play the game. You start off with a single piece of land, and are soon tasked with expanding your area, meeting many of the world’s NPCs, and taking on quests! As you expand and take on quests, you may discover dungeons that await you with puzzling challenges.

The gameplay of Forager revolves around you exploring and expanding the area of land that you are able to build on. How do you do this? Well, start gathering resources that regenerate across your island. From ore to trees, gather absolutely everything to start earning experience points that’ll help you achieve level-ups. Be mindful of your stamina though! Find berry bushes for an immediate source of food as all of these actions decrease your overall energy. Level up and use skill points to unlock additional bonuses and facilities.

Leveling up in Forager will allow you to earn skill points that allow you to unlock special skills. These skills range from additional bonuses that help you out as you progress, to the ability to unlock new building recipes. Bonuses may include faster resource gains from buildings (like forges), craftable weapons & gear, or even increases in material gains from things like trees and ore. Facilities you can unlock via this feature include Forges, Banks, Vaults, Markets, and more, but only if you have enough resources to make them.

You’ve leveled up, earned money, and expanded your land, now what? Well, keep expanding your land! Additional pieces of land that you unlock may feature special puzzles or even a special dungeon. These puzzles & dungeons often yield additional resources and may even sometimes give you special pieces of gear.

Now, Nintendo Switch doesn’t have use for achievements yet, but that didn’t stop HopFrog from including them in Forager for Nintendo Switch! The game features over 84 different ones! Feats range from overall time played, talking to npcs, owning pieces of land, and more! Why should you bother completing these achievements? Well, let’s just say you’ll unlock some neat costumes for your character. You may recognize some other familiar nindie faces if you complete certain ones….

The main audio in Forager is its overworld music & the work of the facilities around you. The overall music is quite catchy and has a nice jingle that never got old as I played more and more of the game. To be honest, I think the music alone kept me coming back for more! The tracks that played during day and night were different with the nighttime music being more quiet to fit the tone. Different sound effects overlap the soundtrack from the facilities you have built around you on your land as well.

While the visuals look fairly simple for a game like Forager, they definitely fit the overall vibe that the game is trying to achieve. From its similarities to games like Stardew Valley, a calm and relaxing game such as Forager has proved that it doesn’t need intense graphics to compete with other titles of its kind. Forager on Nintendo Switch runs almost flawlessly performance wise. Outside of one dungeon (Snow Dungeon) the game never had any performance hitches or frame drops. As a note, the majority of my time with Forager was experienced in handheld.

Forager on Nintendo Switch definitely felt like the best version of the game out there in my experience. From playing this game back during its release on Steam, the game was an overall joy to play on Nintendo Switch. For those Stardew Valley & The Legend of Zelda fans, the charm of Forager is definitely not to miss! Consider giving this game a shot if your looking for your next addictive endeavor as you’ll one hundred percent get your money’s worth.

Forager for Nintendo Switch felt right at home on the system, and definitely excelled as an excellent handheld game. For those fans who like a laid back, simple, and relaxing game, Forager is not to miss. Plus, with continued support coming from HopFrog, you’ll always have new content coming to an already great game.