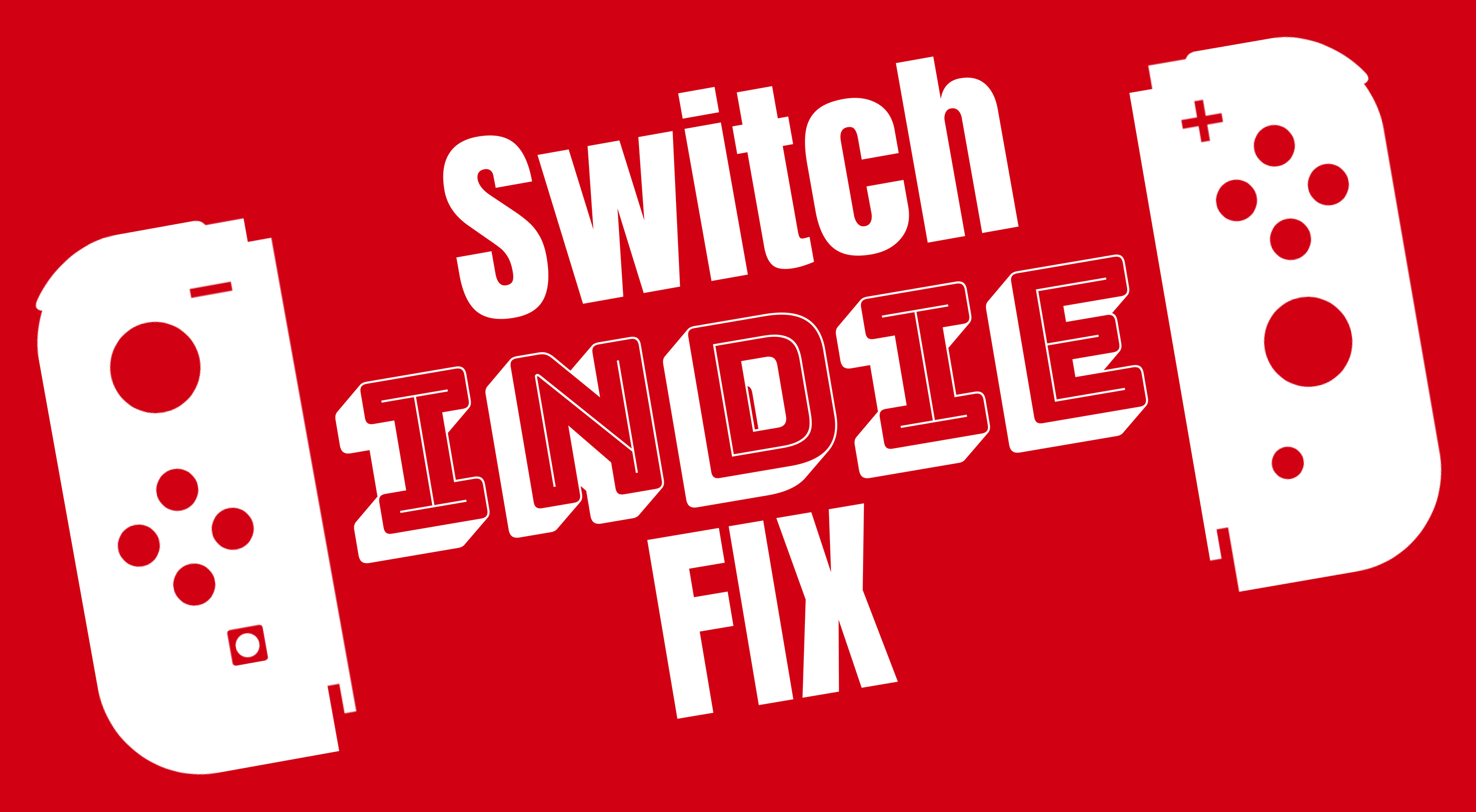 Taking center stage for this Content Creator Spotlight is Adam from Switch Indie Fix. Adam founded Switch Indie Fix back in December 2017. It is a podcast dedicated to Indie titles on the Nintendo Switch. We reached out to Adam to find out more about his podcast and the what it takes to make it work.

Miketendo64: A real nice and easy one to start off with to introduce yourself. Who are you and what is Switch Indie Fix?
Adam: Hi! So my name is Adam and I’m the founder of Switch Indie Fix. We’re a website and podcast dedicated to indie games on the Nintendo Switch and we’ve been running since December 2017.
I started the website back then because the Switch was starting to make a name for itself as an indie machine. Games like Golf Story were filling in big gaps in the Switch’s library at the time and I thought I might be able to carve out a niche with indie games on the Switch. There were so many new indie titles coming to the system and so many people wanted content on them, so I tried to fill that demand with my site.
Now two and a half years later the website is still going strong. I’ve taken on more of an editorial role on the site as I manage four fantastic writers (Musume, Leigh, Justin and Ammy). We post on average two indie game reviews a week and a number of articles and listicles a month.
We also have two podcasts: The Switch Indie Fix Podcast and Generation 8 a Pokemon Podcast, which is headed by Kyle (Darth Stridious) and Luke (Ajaxx013).

Miketendo64: How long have you been running the podcast?
Adam: The Switch Indie Fix Podcast started around March last year and was started sort of by accident. I was featuring in a video with two youtubers (Age of Boredom and RdyPlayer4) and we were playing Mario Kart 8. Age and Rdy were both recording the gameplay but I didn’t have the means to record video (and still don’t) so I decided to record the audio.
I liked the conversation we were having whilst playing, it was almost like an interview with the two youtubers. So I asked them if I could have the audio and post it as a podcast. They agreed and I posted the first episode on Soundcloud and the rest you could say, is history.
Since then we’ve recorded 34 episodes of The Switch Indie Fix Podcast. The podcast is based around indie games on the Switch (obviously) where we cover the latest indie game news, have a conversation about the indies we’ve been playing and answer listener questions. I try my best to have a guest on every episode. My usual co-host is Darth Stridious but when Darth’s busy or our schedules don’t line up, I’ll do the podcast alone. For me it’s a little like therapy, I just get to rant and rave about indies for an hour and I love it!

What difficulties have you faced whilst running the Podcast?
Adam: Hmmm… usually technical issues are always the worst when recording a podcast. I use an old Macbook that has the inability to record dual audio feeds at the same time. Therefore, whenever I have a guest on they have to record their own audio separately, then in post production I edit our conversations together.
When everything works this isn’t so much of a hassle however, it’s happened on numerous occasions that the audio has been corrupted, or the quality of the audio gets lowered after it gets transferred to me, or guests lose their audio files. These are the real headaches of running a podcast. You have to decide if you should cut and paste parts of the conversation together to make a reasonable podcast episode or if you should scrap the whole thing all together.
The second most difficult thing is having time to record. My fiancée and I live in a relatively small one bedroom apartment. We both work full time so sometimes its hard for me to convince her to stay out of the flat for a few extra hours so I can record the podcast. Ideally I’d like the podcast to be weekly, but because of time it rarely happens that it is!

Miketendo64: Of course, you must have had some good times too?
Adam: Yeah. I love writing and recording the podcast, especially when Darth is on or we have a guest! Episode 32 was my favourite episode ever because I had Karl Fredriksson on the show. Karl is the developer behind upcoming indie game Knifeboy. Karl and I have been chatting on Twitter for a while and he’s a listener of the podcast, so it was amazing to have him on the show. He’s an interesting guy with a great insight into indie games and it was so cool hearing his story and how Knifeboy came to be. If I suggested one episode of the podcast to listen to, it would be episode 32.

Miketendo64: Who would be your ideal guest for your Podcast?
Adam: My site and podcast are heavily inspired by a group of youtubers/podcasters called Kinda Funny. They’re huge advocates of positive gaming and just generally being nice to people online, which I’m a big believer of too. They’re also some of the biggest and most respectable gaming influencers out there, so I’d love to have their founders Gregg Miller and Tim Gettys on the show one day!
If I was to have a developer on I’d love to have someone on from Devolver Digital. I’d want to talk about how they managed to become so successful in the indie scene and how important they see the Switch being in the future of the indie gaming industry.

Miketendo64: How often do you host the podcast?
Adam: Not as often as I’d like…. As I said before, I want the podcast to be weekly but because of time and sometimes content, I rarely manage to get a new episode out every week. That means there’s usually a podcast every other week.

Miketendo64: Your podcast is mainly focused on Indie games. What is it about Indies do you enjoy so much as to center your Podcast around them?
Adam: I enjoy indies so much because they don’t have to fall into the constraints that triple A games do and there’s rarely any bullshit surrounding indies like there is with triple A games either.
Take for example, Sayonara Wild Hearts and Untitled Goose Game. Both are extremely out of the box with their quirky ideas. So quirky that if we lived in a world where there was only triple A publishers then games like these would never get made, and if they did, they’d never sell enough to be considered a success (even though Goose Game currently sits at the top of the gaming charts).
Plus, there’s no micro-transactions, usually no dodgy frame rates and they’re cheaper than triple A games. In addition, indies are often better than the games triple A publishers pump out every year. I also love that indie developers take inspiration from triple A games and put their own twist and stamp on them. Hollow Knight for example, was inspired by Metroid and Dark Souls. Developers Team Cherry blended those two classics together and added their own unique world and characters. Now Hollow Knight is widely considered a gaming classic.
The podcast is based around indies because I was covering them on the site and because I saw a niche in the podcast market for a Nintendo podcast just covering indie games. There are so many amazing smaller Nintendo podcasts out there like The Switch Island Podcast and the Switch RPG Podcast, but they cover all games on the Switch. So I tried to make myself a little different by just covering indies.

Miketendo64: Who is your favourite Indie Developer and/or Publisher?
Adam: Hmm, that’s a difficult question. I live in Vienna so I try to support the local indie development scene here. Therefore, I like to try everything Broken Rules publish. Their most famous (and in my opinion best game) is Old Man’s Journey. I love that they managed to tell a touching story without any dialogue or text and the art in the game is stunning. It’s a must play on the Switch.
Publisher-wise I always think Devolver Digital does an amazing job with consistently publishing great indie games. When you look at their back catalogue they have hit after hit and their developers are from all over the world. They were also one of the first big indie publishers to support the Switch, which I think added to the Switch’s credibility and helped make it the success it is today.

Miketendo64: Do you ever take your podcast on the road? For example, to video game expos or conventions?
Adam: Yes! This year I’ll be going to EGX London and hopefully recording some interviews with the indie devs there. So if you’re going to EGX this year, I’ll be there on Saturday wearing a big red Switch Indie Fix badge, so if you see me, come say hello (and I’ll give you a badge)!
Last year I went to Game City, Austria’s biggest gaming convention in Vienna. It was incredible as I’d managed to snag a press pass so got to get in early and see most of the games on show before the crowds got there. There were a bunch of indie devs there from Austria, most of them I’d never heard of, so it was cool meeting and interviewing them and getting to play their epic upcoming games. It’s episode 13 of the podcast if you want to check it out!

Miketendo64: Most importantly, where can people follow you on Social Media and how can they support your Podcast?
Adam: Both podcasts are available on all good podcasting services, just search ‘The Switch Indie Fix Podcast’ and ‘Generation 8 Pokemon Podcast’ and you’ll find them.

Finally as I said before, I’m a big advocate of positive gaming and just generally being nice to people. So I have a discord server which is filled with like minded people that talk about all manner of things- not just video games. So if you’d like to join in and play some cool games with some cool people, just go to http://switchindiefix.com/discord
So that’s me and Switch Indie Fix. I’d like to say a massive thank you to Miketendo64 for featuring me. I’m a big fan of the site and appreciate everything you guys do for the Switch community, so thank you!

Thank you Adam for taking the time to answer our questions. We truly appreciate your dedication to indie games and helping to give them a voice and the promotion they need. we enjoy engaging with you on Twitter and we hope that you keep on doing what you love doing.

To everyone else reading this interview, thank you for taking the time to read it. We hope you will check out Switch Indie Fix via their Website and Social Media. If you are a content creator and would like to be featured in a future Content Creator Spotlight Feature, be sure to email us at contact@miketendo64.com with the subject titled Content Creator Spotlight.

Well, until next time, Keep On Gaming!