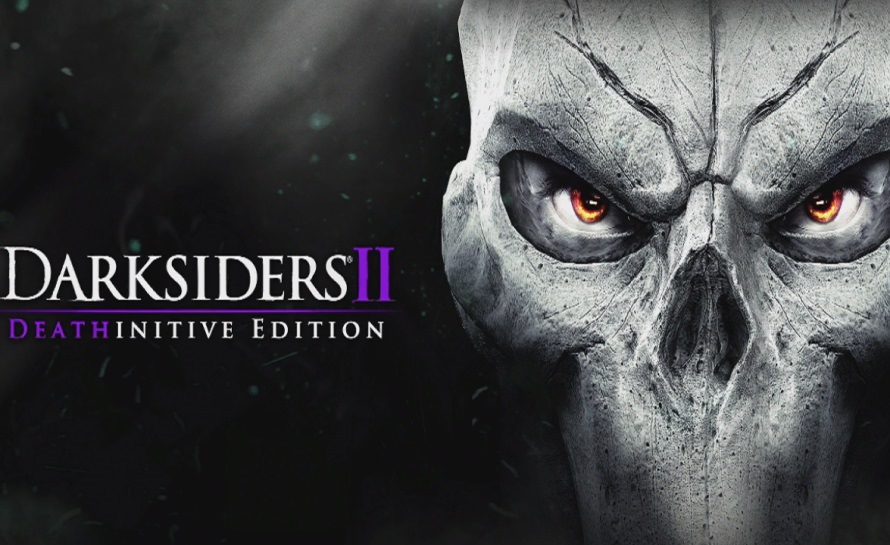 October 9, 2019 10:00 am Published by jonathanober Leave your thoughts

Darksiders II was originally released back in 2012 on the major consoles, even getting a Wii U port of the Xbox and PS version of the game. Now after almost six months from Darksiders: Warmastered Edition’s release on Nintendo Switch, the second game in the series arrives in its remastered version, complete with DLC and upgraded visuals. The game had been previously released on Xbox One and Playstation 4 and now several months later, it is finally on the Nintendo Switch.

This time around, you now play as his brother Death in a sort of redemption story in which, Death must right the wrongs of his brother and prove his innocence to the Charred Council. Along the way you learn of a great fight between demons of the underworld and other side quests, which sees Death helping a variety of seemingly good and generally evil characters along the way.

During your 25-30 hour campaign you will uncover a quest to save the Tree of Life and restore balance to the world. Some of the best story beats though, take place in the latter half of the game where some of the quests have you dealing with the Lord of Bones and recovering souls for him.

Darksiders II doesn’t stray too much from the looter hack & slash style gameplay established in the first game in the series. It does seem that the Death-centric game features a more in-depth weapon and skill tree upgrade system. The game, like its prior entry into the series, has elements of Zelda and Metroidvania-style world unlocking as new weapons and abilities become available to Death throughout the main story.

Early on you gain a revolver, which returns from the first game, which allows you to shoot unlimited bullets with a limited cooldown between each spin of the revolver. The gun is used in combat to slow down and extinguish foes and their armor, but also can be used throughout the game world to unlock switches or discover hard to reach items breaking their icy shell.

You unlock other abilities like a claw, which acts as the game’s hookshot, which lets you cling to glowing purple orbs as well as pulling pillars towards you to solve puzzles, handle bombs, and more. The claw can also be used in combat to pull yourself towards the many large bosses you will fight or bring smaller enemies to you to lessen the space between them and your scythe, axe or hammer.

Another ability unlocked late in the game, allows you to split your soul in two and is used during combat and puzzle solving bits in unique ways which sometimes requires out of box thinking and balancing timed jumps and levers to interact with. I found some of the split souls puzzles to be among the best. And, without spoiling, how you get your split soul ability was one of the better twists in the game as far as its reveal.

The gameworld is littered with specific areas of interests that are home to either friends or foes, though the game does have several large dungeons that act as level capstones to the chapters and quests you are going to go through. One area of the game world that stands out is the lore found within the varied sections of castles, floating ships, and monoliths. There is a sense of a world that feels lived-in as tree trunks have broken through the walls, caverns crumble and are filled with skeletons and weapons cluttered upon the ground, and a looming fog and sense of despair is seen throughout.

The game’s main areas are linked together by open plains, swaying bridges and landscapes that house enemies of various sizes as well as hidden treasures and areas that beg to be explored. There are NPCs as well which you will find various side quests from like finding items that had been long lost in a fortress or left behind during the escape. Finding these items will help you complete quests which oftentimes lead to unlocking special hidden items or weapons, which can be used to increase your stats or be sold for gold, and in turn, can be used to unlock combination moves or other weapons.

During the open sections of the map you have access to Death’s horse, Despair, which acts a bit like Link’s Epona companion in Ocarina of Time or one of the many horses in Breath of the Wild. You can swing your weapon or shoot your gun whilst mounted atop Despair. You can also gallop faster as you scour the plains looking for hidden treasure and secret items.

One main area that Darksiders II captivated me, was in its level of item drops raising the looter hack and slash game to a back and forth game of equipping items for certain scenarios. These equippable items ranging from Scythes, Hammers, Axes, Gauntlets, Capes, Talismans, and more. Each item has various stats attributed to them like strength, defense, critical hit % and more. Their varied ‘up and down’ points, leads to a need to balance the items you apply to Death, and visually each one will change in some way.

Death will also slowly upgrade in level naturally throughout his quest. Boss fights and secret items found throughout will add to his skill level and let you apply skill points to special moves. There is a limit to the number of special moves you can have quick assigned to the L + (A,B,X,Y) modifier and each skill you have assigned takes a different amount of wrath power to use which also slowly regenerates. This balance of skill and wrath points becomes more apparent during boss fights when Death gets overrun and his wrath powers are necessary to overcome the stronger boss fights or barrage of skeletons, demons, and witches that may swarm you.

From time to time, the main thing to take into account during battles is health potions, balancing weapons and attributes you have assigned to each of them, as well as which abilities you have quick assigned to your buttons, as certain enemies are more susceptible to various attacks such as getting behind a shielded foe, or air attacking, or spamming your hammer or stronger, yet slower weapon, for that final blow.

Darksiders II does have come with all the DLC previously loaded, including: The Abyssal Forge, Argul’s Tomb, and The Demon Lord Belial. The DLCs are free, though they only unlock upon completion of certain chapters in the game. The DLC packs add roughly an hour each to the gameplay found in the main game and consist of new story elements and areas to visit as well as loot to find and of course… boss battles.

Darksiders II won’t win awards for its music, although the pieces used in the game do convey the sense of size and epicness of the main bosses and game world within Death’s adventure. The tunes are appropriate throughout and do a great job in being subtle during more of the searching and exploring portions of the game and then picking up as enemies approach you or you come up to a new section of the world.

Many of the characters you will come across during cutscenes and as NPCs have voice acting and the cast of characters is varied and well done. Death is voiced by Michael Wincott who delivers his lines in a gruff, matter-of-fact tone and really helps in characterization of Death. Game of Thrones alum, James Cosmo voices Maker Elder Eidard with a commanding boom and feelings of being a weathered and worn old man.

There were a few times where some character audio would be really low in one camera angle of the cutscenes, but then later be normal volume or louder. This was off-putting and could cause you to miss out on story elements. Fortunately, I had subtitles turned on so I never missed the story bits in those scenes.

Darksiders Warmastered Edition, like other THQ games, had a performance and quality mode which allowed gamers to switch between a game that ran smoothly or looks better. Darksiders II is without that option and I am not sure that was a good thing. There were obvious times of slowdown primarily between rooms within the dungeons, where loading screens will stall your progress for a few seconds. The performance slow down isn’t that big of a deal, though it does interrupt your game enough to become a hindrance from time to time.

On the visual side of things, Darksiders II is a great looking game in most areas, and the style adheres to the more over the top caricatures like bulging biceps and war torn clothes, weapons, and even shards of swords sticking out of some character models. The variety of level design of the areas within the game are detailed and, as I stated earlier, tell a deep history within their high ceilings, Celtic influences, large statues, corridors, and various platforming sections.

The game does a great job of being set in its own style and carrying that throughout the entire game world. There were some sections of the game where visual pop-in and odd shadows would either be exaggerated or seemingly not present in one scene but then moving the camera or watching the cut scene would slowly reveal the shadow.

Darksiders II is a great game and does a lot of things well. There are small changes as well as larger ones in regards to how Darksiders I played and I really like what they did with the second game. Darksiders II appealed to me more so than the prior game due to its story and combat being more fluid, as Death is a bit more acrobatic than War, and his special skills add to the aerial fluidity in his attacks. Darksiders II is a lengthy game and gives me hope for the third game in the series to be ported to Switch.

If you are looking for a semi-open world game similar in style to games in the Legend of Zelda series or Metroidvania, Darksiders II will definitely scratch that itch. The game has a steep difficulty in some areas and most of the later level bosses require a series of dodges and timed attacks to get through. Overall though, Darksiders II is an epic apocalyptic game with great storytelling, action, combat, and puzzles.