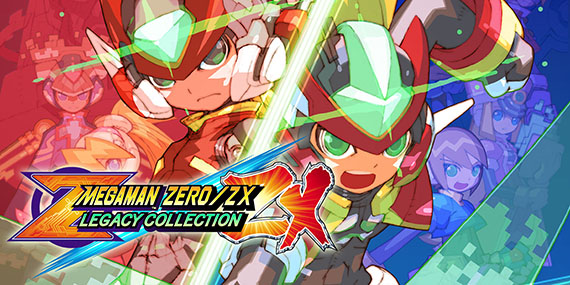 Mega Man fans, a brand new collection of Legacy titles have been announced for Nintendo Switch! Introducing the Mega Man Zero/ZX Legacy Collection! Capcom has announced today that this collection will arrive in January of 2020 and a new trailer has been released.

Six games, five heroes, and two series megamerge into one giant collection! Taking legendary Reploids into the far future, join Zero as he battles against the forces of Neo Arcadia, then witness the rise of a new generation looking to carve out their own story. Mega Man Zero / ZX Legacy Collection brings the intense action of Mega Man Zero through Mega Man Zero 4 as well as Mega Man ZX and Mega Man ZXAdvent to modern platforms beginning January 21, 2020!

Just like with past Legacy Collections, you’re getting a ton of bonus content, including galleries filled with character illustrations and art. There’s also a music player, great for listening to the excellent tracks from each game, and several new songs made just for Mega Man Zero / ZX Legacy Collection! Plus, if you watched the trailer, you might have caught a sneak preview of a brand new Z Chaser mode being added. We’ll have more info on that soon, but for now, let’s get to the games.

“Zero… has been resurrected….”

Set hundreds of years after the events of the Mega Man X games, Mega Man Zero sets the stage for the revival of the legendary Reploid Zero as he joins human scientist Ciel and Resistance forces in their fight for a better future. As the events of each Mega Man Zero game unfold, you’ll learn more about the fate of old friends and gain powerful new allies… as well as cross paths with terrifyingly destructive foes.

Fortunately, Zero still knows how to fight, but it’s up to you to put his skills with a Buster and his legendary Z-Saber to use. You’ll need to bring your absolute “A” game if you want to stand a chance of cutting through challenging stages and difficult foes alike! With each adventure featuring a unique ranking system that can affect what attacks bosses use and even what powered-up EX skills Zero learns from his victories, it’s up to you to use familiar armaments and new, unique weapons to take down your enemies. As you progress through each game, you’ll come closer to uncovering the truth behind the ruinous Elf Wars and the dark secrets lurking within Neo Arcadia.

Hundreds of years after the events of Mega Man Zero come to an end, humans and Reploids now live together in peace at the start of Mega Man ZX. However, an old threat has re-emerged: Mavericks. These berserk Reploids attack anything they see, and when they set their sights on a pair of Transporters on a routine delivery, the wheel of fate begins to turn again. As Vent or Aile, discover your ability to megamerge with Biometal Model X and Biometal Model Z to take on powerful new forms and put a stop to the Maverick menace!

Mega Man ZX Advent, set several years after the events of the first ZX, sees a new pair of heroes looking to make their own mark on history. With two overlapping stories each offering different perspectives, join Ashe or Grey as they discover who they are with a little help from Biometal Model A. Expanding on the first game, you won’t just gain new forms from defeated foes – you’ll be able to use “A-Trans” to copy their DNA and transform into bosses, gaining access to their unique abilities!

These games can be pretty intense. If you’re more the type that likes to sit back, relax, and enjoy a thrilling story, Casual Scenario Mode and Save-Assist have you covered. Casual Scenario Mode offers the same core gameplay experience, but powers up your character, gives you extra lives, and reduces the penalty of spikes and pits from instant death to taking damage instead. Save-Assist automatically saves your game mid-mission, giving you a point to restore from if things go wrong or if you’re looking to practice a difficult section or boss. Both Casual Scenario Mode and Save-Assist can be individually turned on and off for each game, putting the power of how you want to play in your hands.

“When an enemy appears… I’ll terminate it…”

All of that isn’t even counting additional features for modern consoles, including optional visual filters and multiple screen layouts for ZX and ZX Advent!

There’s a lot to look forward to when Mega Man Zero / ZX Legacy Collection brings all six of these great games and more to PlayStation 4, Xbox One, Nintendo Switch, and PC on January 21, 2020! Plus, if you pre-order the game, you’ll get the Reploid Remixies, an additional ten new in-game songs – one new stage remix in each of the six games, and four bonus Music Player tracks. We’ll have even more to share over the next few months, including information on the unique Z Chaser mode, so be sure to follow Mega Man on Twitter and Facebookfor all the latest.

As an added bonus, if you’re attending PAX West, we’ll have all six games in the collection playable on the show floor, so be sure to stop by and check it out!