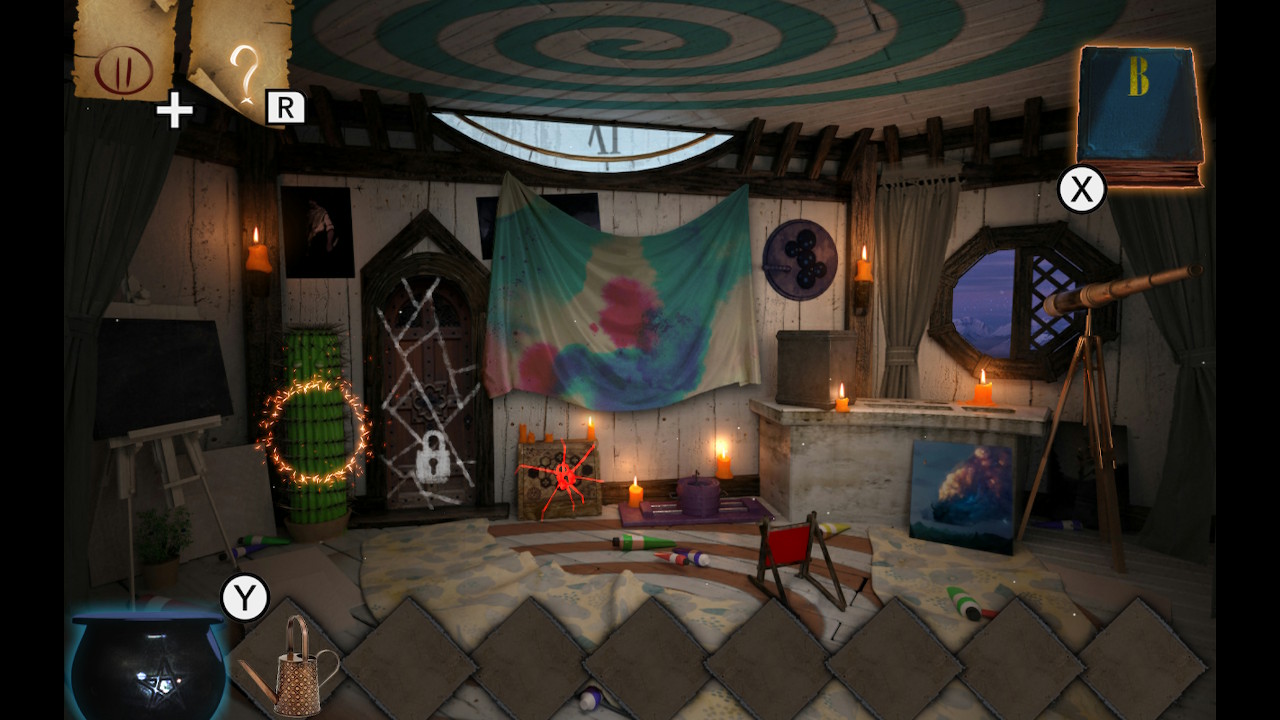 The Tower of Beatrice was previously released on Steam and more recently released on modern consoles including the Nintendo Switch. Developer and Publisher, Sometimes You, has been bringing a steady stream of games to the Nintendo Switch and The Tower of Beatrice is its most recent release. The game has been mediocrely reviewed getting average scores and the Switch release is no different than the previously released versions of the game.

The story in The Tower of Beatrice sees you, the unnamed protagonist trapped within a magical tower tasked with recovering a book of spells and escaping with your life and your wits. Along your journey, you will come across a card-playing demon and snowman, a color-changing pencil, solve puzzles as to why a clock has stopped working, and fight against a witch.

The Tower of Beatrice contains six different rooms, which you must explore and unlock the puzzles to escape the rooms and ultimately escape the tower. Each room contains several different puzzles with active areas where you can click around to zoom into. Once zoomed in on an area you will need to find items that can be combined or used to solve the puzzles.

Like most point and click adventure games, The Tower of Beatrice, is a linear story in which many of the areas only open up once you solve the puzzle leading to the next area of the room in succession. One main issue with the gameplay and the puzzles in The Tower of Beatrice is that sometimes the puzzles and the way in which you move from one area to the next isn’t always logical. The game includes a book of spells, which you can use to combine items into a cauldron in ways that do not make sense.

For instance, in one area you may need to combine feathers, leaves, or liquids together to create a potion. These spells allude to magic oftentimes found in fairytales where combining toadstools, a lock of hair, and a scale from a dragon somehow will bring someone back to life, the problem is that the process is sometimes cumbersome and vague in which items you need to make these combinations work out the right way.

As I mentioned earlier, the rooms have several active areas which oftentimes lead to a zoomed-in area, which has an item you can pick up, or an item that needs to be interacted with by combining another item in your inventory. There were a few times in the rooms where the clues needed to unlock one area were found in subtle background art or upside down. As I played through the game I found myself taking photos with my phone of different solutions I found in one section because I knew that I would be needing it later and the constant zoom in/out of different sections was slow and tedious.

The game does include a hint system, which when activated will give you small snippets of riddle-like clues alluding to the next steps or which items you would need to combine to progress through the game. There were a few times during gameplay when I was stumped and the hint system helped to lead me to the next item I needed and steps to take to get out of the room.

The Tower of Beatrice does have a mysterious character overseeing your entire adventure and egging you on in your quest to get out of the tower. The dialogue banter back and forth is decent enough, but since all of the dialogue is through speech bubbles the conversation is mostly one-sided.

After completing the game you can access any of the six rooms and replay the sections of the game. I found that once having beaten the game I could complete some of the rooms in a few minutes, versus the first play through of several minutes each.

Since The Tower of Beatrice is a linear puzzle game, there isn’t much in terms of replayability after you discover the path you need to take. The first play through is often the longest when it comes to games like this and your enjoyment of the puzzle types and finding the solution on your own can be very rewarding. I’d say on average you will get about 4 hours or so out of the game in the first run which isn’t too bad considering that The Tower of Beatrice is a budget title.

The music in The Tower of Beatrice is a bit repetitive, especially if you find yourself trapped in a room for a long period of time and unable to solve a puzzle quickly. The music is terrible and for much of my original playthrough I kept the sound down and listened to my own music selection in the background. There aren’t any lines of spoken dialogue, as mentioned before, so overall the sound design is lacking and boring, and not at all interesting.

Art direction in The Tower of Beatrice is a bit of a mixed bag. There are elements of the game that are pre-rendered backgrounds with subtle animations playing in loops. As you uncover items and interact with each room’s puzzles you will see some changes to the backgrounds like broken glass, a melted box due to you spilling a toxic chemical, and more. The backgrounds remind me of other room by room point and click puzzle games. The variety in puzzles is at least a refreshing room to room.

The game is simple and I never really noticed any hiccups or frame rate issues. There were times when animation loops seem to restart with a slight slow down or conversations with the mysterious narrator would linger slightly after pressing the next button. But neither of these issues was persistent or negatively impacted my gameplay sessions.

The Tower of Beatrice isn’t a terrible game, but it is also not a great game or a memorable game. There are a lot better puzzle games out there that you’d get more time with as well as. One thing I noticed in my playthrough is that I would often have to jump back and forth from area to area from my inventory to the main room and while that wasn’t a big deal it was something that became a bit of an annoyance as it slowed down the speed in which I could move through the rooms.

If you are a fan of point and click style puzzle games The Tower of Beatrice is at least a decent game that will keep you busy for a couple of hours. The art style and dialogue in the game is ok and at times funny. Just note that once you beat the game there isn’t much in terms of replaying the game.